By Lisa Cowdell | 14 years ago 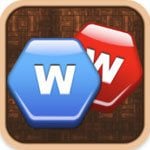 I think word games appeal to a special segment of the gaming population. Maybe you're an avid reader and you love books. Maybe you make a living from some form of writing like public relations, journalism, advertising or law. Or maybe you've just always loved the challenge that comes from forming words out of a random set of letters. They're not for everyone, that's for sure. But for those of us who are word-addicts, games like WordsWorth can be very entertaining little diversions.

Wordsworth is part of the sub-genre of word games called “anagrams” which means “to form a word, phrase or sentence out of a given set of letters.” Scrabble, Boggle, and even the 80's gameshow Lingo are all examples of anagram games. If you've played any of these games, you'll have no trouble figuring out what to do in WordsWorth.

You basically form words out of a wall of hexagon-shaped tiles. The longer the word, the more points you score. This type of gameplay becomes boring quickly if you don't have some variety to spice things up. Think how dull it would be to play Scrabble without a 'wildcard' blank tile or without a 'triplescore' space on the board to make your Q or Z letter worth a lot of points. WordsWorth does offer some good variety to break things up, like 'wildcard' tiles that can be any letter you choose. Some tiles drop off after a round, and there are other ways of refreshing the board so you've always got a new set of letters to play with if you want. You can also change the number of tiles in each row, from 3 to 7 across. The more letters, the more challenging but also the bigger reward for stringing together longer sets of letters to form a monster word worth oodles of points.

Speaking of variety, there are two different modes: timed and untimed. Personally, I think the untimed mode is a little dull. Without the challenge of being forced to create words quickly, part of the fun disappears. Imagine playing Boggle without the timer. Boring. In timed mode, the board explodes if you take too long, providing added incentive to think quickly. You can also play using your choice of three different dictionaries by which your creations are judged as valid or invalid words. I only tried the TWL (Official Word List for Tournament Scrabble) because it's familiar to me, but it was nice to know the game can access different authoritative sources. Most arguments in word games stem from disagreement over whether or not a combination of letters is actually a word or not.

There is no argument that WordsWorth has captured the essence of well constructed word games with its challenging and addictive gameplay, but there are some areas where the game falls short. Keeping in mind that the iPhone has tremendous display and sound capabilities, I am always surprised when I find a game that offers mediocre graphics and sound programming. The character and other graphic elements in WordsWorth are rather basic and uninteresting. The music in WordsWorth is also lacking pizzazz. I actually turned it off after a short while because it became mind-numbingly repetitive. Sound effects were pretty good, and I left those on without the music.

Even though the graphics and sound are sub-par, I still found WordsWorth thoroughly engaging because I am one of those word game fanatics. For those of you who want to give it a try, there is a free “lite” version of WordsWorth. If you love word games, the way I do, you will definitely find it worth a buck to download the full version.