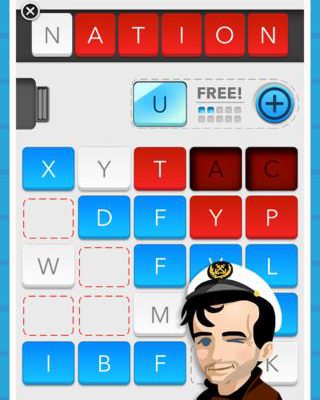 Polite looks aside, this word game’s still got a real bite

Word games are fun and educational, but they can also be a bit stuffy and predictable. But word fights—ah, that’s something else entirely. Wordly by Scopely is a fast-paced, highly competitive word-based puzzle title that’s more akin to tug-of-war than Scrabble. And if you don’t feel like beating your chest in your friends’ general direction, you can have a go at Shakespeare, Mark Twain, or the Wolfman.

Wordly pits you against your competitor on a grid that measures five letters by five letters. You take turns spelling out words until each letter has been used at least once. Here’s the kicker: you can turn the letters that your opponents used against them. If they spell “MAY,” you can spell “YAM” back at them. In fact, better to spell “YAMS,” since the game ends when the last letter has been claimed by either side. Moreover, when you steal your opponent’s letters, it subtracts from their score and adds to your own. 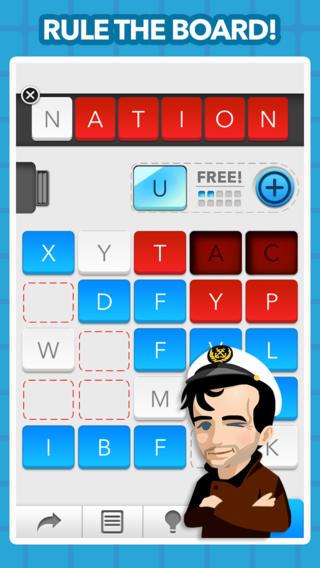 Wordly is a devilish little word game that challenges you to think two steps ahead of your opponent. You can be at the top of the world, only to have your rival pull the rug out from under you with a single, fat word that steals the majority of your tiles and finishes up the unused letters on the board. To make things more complicated, most tiles are worth a single point, but others are worth multiple points.

True to its mission to make you hate all of humankind, Wordly offers lots of ways to connect with other players. You can fight random opponents (or they can fight you), you can contact friends via Facebook, or you can look up a specific user name. Once you’re settled in and the game begins, matches tend to be quick and dirty (provided the player on the other end doesn’t dawdle for years), though things can certainly get drawn out if you’re particularly devious about stealing tiles out of one another’s grasp.

If you’re not in the mood to communicate with other beings, Wordly also features a competent single-player mode, which is nice. By “Challenging the Greats,” you can play games of Wordly versus history’s greatest minds, authors, and monsters (for a French/Polish/Hungarian woman, Marie Curie sure yields impressive command over the English language). The challenge ramps up the further in you go. When you inevitably lose your shirt, your high-profile opponent offers a witty little jab that subscribes to his or her character. Cute. 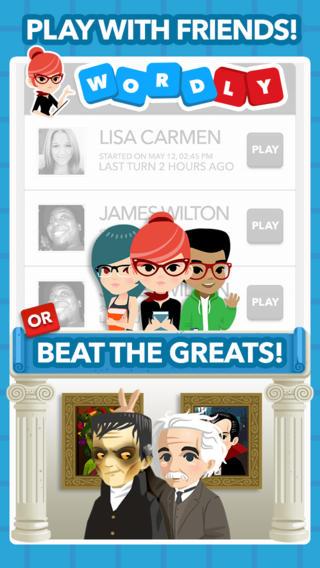 The single-player campaign is a great addition, but it’s also the source of Wordly‘s greatest weakness: you need “Brain Power” (energy) to play against the Greats, and it’s slow to recharge. Worse, making a single move against some Greats requires more than a single unit of Brain Power, and you don’t have a lot to spare in the first place—unless you make an in-app purchase.

But Wordly is at its best when you’re struggling against another human being, anyway. Put down the Scrabble, pick up some brass knuckles, and start spelling with a vengeance.