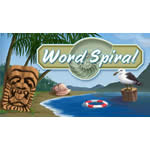 Want to improve your vocabulary while sneaking in a little rest and relaxation by sunny seaside shores? Drop that best-selling novel, reclaim those frequent flier miles and save yourself the trouble of conning the boss into awarding you some long-overdue vacation time. Communications skills-building brainteaser Word Spiral actually lets you accomplish these goals without breaking a sweat, or having to scrounge at the last minute for a hotel in the Florida Keys.

Genetically splice popular tabletop diversion Scrabble with a New York Times crossword puzzle, and you’ll get an inkling of what the game’s all about. Its leisurely action, set at calm-inducing locales such as Happy Beach and Volcano Island, requires just as much phrase-forming know-how as it does a knack for completing commonly-used terms by inserting missing characters. The objective on each stage: Solving a crossword puzzle, located on the left-hand side of the screen, which-while empty at first-slowly fills as you form words composed of random letters. (Characters used in their construction actually zoom over in a twinkle of flashing lights and appear in the crossword.) Just one catch; on every stage you’ll visit, these letters are contained in a spiral-shaped grid of random size and proportion, with your access to each limited by availability and distance.

Think of this spiral-which takes the form of spherical tiles laid out in honeycombs, pyramids and stacked rows-as the general pool of playing pieces from which you can draw. Any of the letters it contains can be clicked on, and in whatever order you like. Creating a word causes utilized tiles to disappear from play, advancing and making way for an influx of additional letters.

You can only form words of three or more letters, though. And, while the characters you choose needn’t be located next to one another, you may only move so far to reach the next desired tile, limiting your word-building potential. What’s more, power-ups such as bonus tiles which award additional points or bombs that destroy entire sections of the board also pop-up periodically. You can further choose to guess the letters in the crossword at any time, although only three errors may be made before this option is revoked. (Additional guesses are awarded, though, by forming words with 7 or more letters in them.)

Depending on which of the three featured game variants you’ve chosen, you’ll also face additional constraints. Regular mode incorporates a ticking timer, with this gauge slowly replenished with every word made. Speed play handles similarly, though the clock counts down much faster. Relaxed options do away with such issues entirely, though there’s a tradeoff: You’re afforded only a limited number of words that can be formed before you’re forced to solve each puzzle.

Hence the outing proves surprisingly strategic. Questions you’ll face include: Do you form bigger words in an attempt to clear extra space and potentially bring rarer letters into play at the expense of faster phrase-making? Focus on constructing easy words, or look for opportunities to act like a human dictionary, creating phrases composed mostly of consonants and possibly fill in the crossword that much faster? Burn a guess in the hopes you’ll get past a certain sticking point, or pray the letter presently leaving you stumped accidentally appears when you spell a random word sometime later? Or, for that matter, go for quality or quantity, all while a ticking clock and your chances at successfully solving the crossword shrink with each passing second.

Nonetheless, be forewarned: Given a colorful, yet simplistic presentation and predictable play experience, it’s hard to imagine anyone being driven batty here, let alone pleasingly insane. Word Spiral isn’t so much maddeningly addictive as simply distracting, making it less compulsory than category leaders like Babel Deluxe and Bookworm. Don’t let such minor niggles hold you back, however. With dozens of items like sand castles, seashells and cruise ships to collect by forming bonus words, there’s plenty of reason to keep playing. Even more so, considering the only way you’ll see all is by pounding through each of the featured trio of game options.

The final takeaway being as follows: This puppy’s somewhat limited, but totally C-O-O-L by any stretch of the imagination.