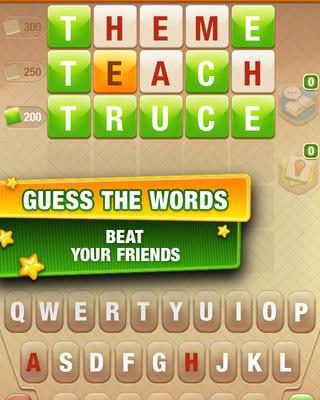 Word Smack doesn’t bring much new to the word game genre, but provides a simple and entertaining way to pass the time.

EA Mobile’s new Word Smack is a competitive, two-player word guessing game that can be played against Facebook friends or random strangers on the internet. The action unfolds over three alternating and increasingly difficult rounds, each of which presents you with 15 opportunities to guess five-letter words.

If you’re good, you could guess 15 separate words and rack up a huge score, but if you’re bad you could blow 15 attempts to guess a single word and get nothing. Good or bad, once you’ve made your 15 guesses, it becomes the other player’s turn, and back and forth it goes until all three rounds are complete. When it’s over, the scores for each round are totaled, a winner is declared and it’s off to the next game. 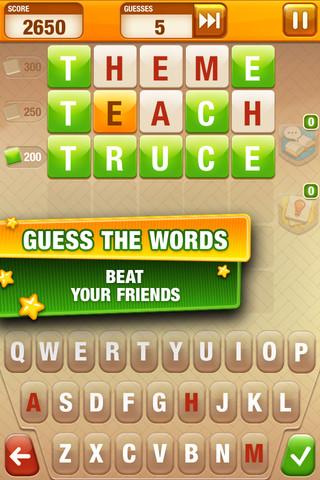 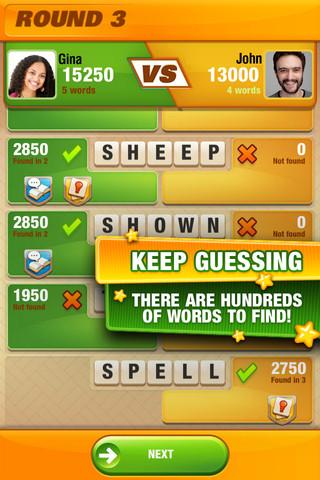 Making the word-guessing process somewhat more manageable are three different kinds of powerups that can be purchased with tokens earned in-game or purchased through the built-in store in amounts ranging from 99 cents to $99.99. The “Hint” powerup provides a synonym for the word you’re guessing, “Letter” displays one other randomly-selected letter in the word – but again, not its location – and the arcanely-named “Hammer” knocks five letters that are not in the word off the board. Each powerup can be used three times, and two powerups can be purchased per game, the first for ten tokens and the second for 40. Six powerups per game can make quite a difference to your score, but at 50 tokens per game, it won’t take long to burn up your supply.

Word Smack takes place on a relatively dull-looking virtual gameboard, with a QWERTY keyboard taking up the bottom third of the screen, your score and number of guesses remaining displayed in a narrow bar at the very top and a large open space displaying letters and guesses occupying most of the rest. It’s a clean and functional layout, but there’s no eye candy to speak of and it’s really not much to look it. It’s not much to listen to, either, because there’s no music and sound effects are minimal. An ad-free version of the game can be purchased from the in-game store for $1.99, and while it’s hard to go too wrong at that price, the ads in the free version roll across the very bottom of the screen and are actually quite unobtrusive.

The only real annoyance to be found in Word Smack is its overly-long loading times. Switching between screens can result in pauses of several seconds while the game loads up, and worse, it has a habit of pausing to load data at random but frequent intervals while you’re playing. I also ran into an odd situation in which, after playing a few words and then stopping and coming back later to complete the round, I was allowed to make more than 15 guesses. It appears as though the game was letting me guess at all the words my opponent was able to solve even when they went beyond my limit, and while my final score didn’t reflect those excess attempts, it nonetheless suggests that the game might still have a few bugs to iron out.

Word Smack has the appearance of a game that values substance over style. The trouble is that there’s not a whole lot of substance here either. Die-hard word game fans will get a kick out of it, but for everyone else, it’s really just a tarted-up Hangman. That’s fine as far as it goes, but in the long run it doesn’t add up to much more than an amusing but brief diversion.