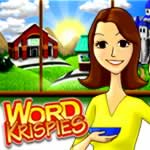 If you used to munch on Alpha-Bits cereal as a young’un then you already know the joy of forming words in your bowl using the soggy letters. For the uninitiated, however, there’s Word Krispies, which takes that pastime and turns it into a full-fledged word game.

The story begins when a boy and girl (presumably brother and sister) are taking a tour of the local cereal factory and disaster strikes. The girl’s precious diamond necklace comes loose and falls into one of the boxes, which ends up on a delivery truck packed with hundreds of other cereal boxes destined to be dropped off at locations all over town. The children have no choice but to chase after the truck and eat their way to the bottom of each cereal box until they find the one that has the diamond necklace at the bottom.

During each round of play, cereal is shaken out of the box into a bowl of milk. Each cereal piece has a letter stamped onto it, and the goal is to form words out of the letters to make them disappear, either by clicking on them with the mouse or actually typing the word out on the keyboard. When letters disappear, more arrive to take their places until eventually the box is emptied.

The concept of forming words using letter tiles is of course nothing new, but Word Krispies adds several cool cereal-themed twists. Unused letters will get soggier the longer they’re left sitting in the milk, until they’ll eventually sink to the bottom and you’ll lose a life. Certain pieces have colored marshmallows attached to them, and bonuses can be earned by forming words using letters of the same color. Occasionally some letters come out of the box stuck together and have to be used as a pair in sequence.

As the truck winds its way through town, it stops at a variety of places that each have their own unique brand of cereal and associated bonus power-ups. For example, the Candy Store has honey bombs that explode all letters around them when clicked on. The Health Food Store has a talking broccoli that offers hints about what word to make next. And the nuclear power plant (yes, power plants need cereal too, just run with it) has radioactive symbols that mutate nearby letters while making them crispier.

There are also a handful of word mini-games interspersed throughout the main story mode that give you an opportunity to earn additional lives. They are Hangman, Fill the Gap (fill in the missing vowels), Extra Serving (use all letters in the bowl), Anagrams (make as many words as possible out of the given letters) and Jumble Words (figure out what the jumble word is).

Visually, it’s worth noting that the game-makers added several subtle touches that really enhance the experience. Marshmallows leave little colored swirls in the milk, and letters bob and float around in following the natural laws of physics. (It’s a cool effect, but there’s also the option to turn it off if it bugs you).

There are two game modes offered: Classic and Action. In Classic mode you can take as long as you like to make a word, with letters becoming one degree soggier after every turn until they eventually sink. In Action mode the idea is to make words as quickly as possible because letters become soggy in real-time, creating a frantic experience that, quite frankly, falls flat.

If players stick to Classic mode, however, they’ll find a solid story-driven word game whose unique package injects a healthy dose of fun into the equation.