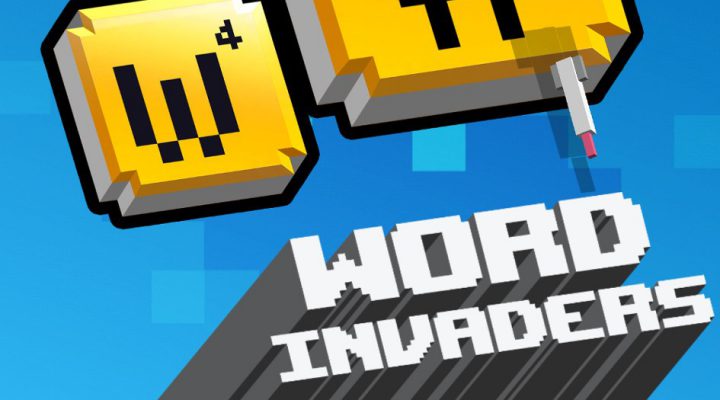 Interesting mixing up of genres.

Plenty of twists to the formulas.

Probably not quite arcade-y enough for arcade fans.

Word Invaders is the latest in a long line of games that try to play around with the format of the word puzzler. No longer the preserve of dowdy corners of newspapers, the word game is now all about action, adventure and being able to spell things really, really quickly.

This one riffs on the arcade classics of yesteryear, taking the basic shape of Space Invaders and then throwing a whole bunch of letters at it. And for the most part, it works. It’s a tough ask the deeper you get into the game, but when everything clicks, you’ll be spelling with the best.

Plus it’s always nice to see a game that tries to do things differently. It might be a little clunky in places, and there might be times when you’ll hurl your mobile device down in a petulant rage, but there’s still a lot to enjoy here. 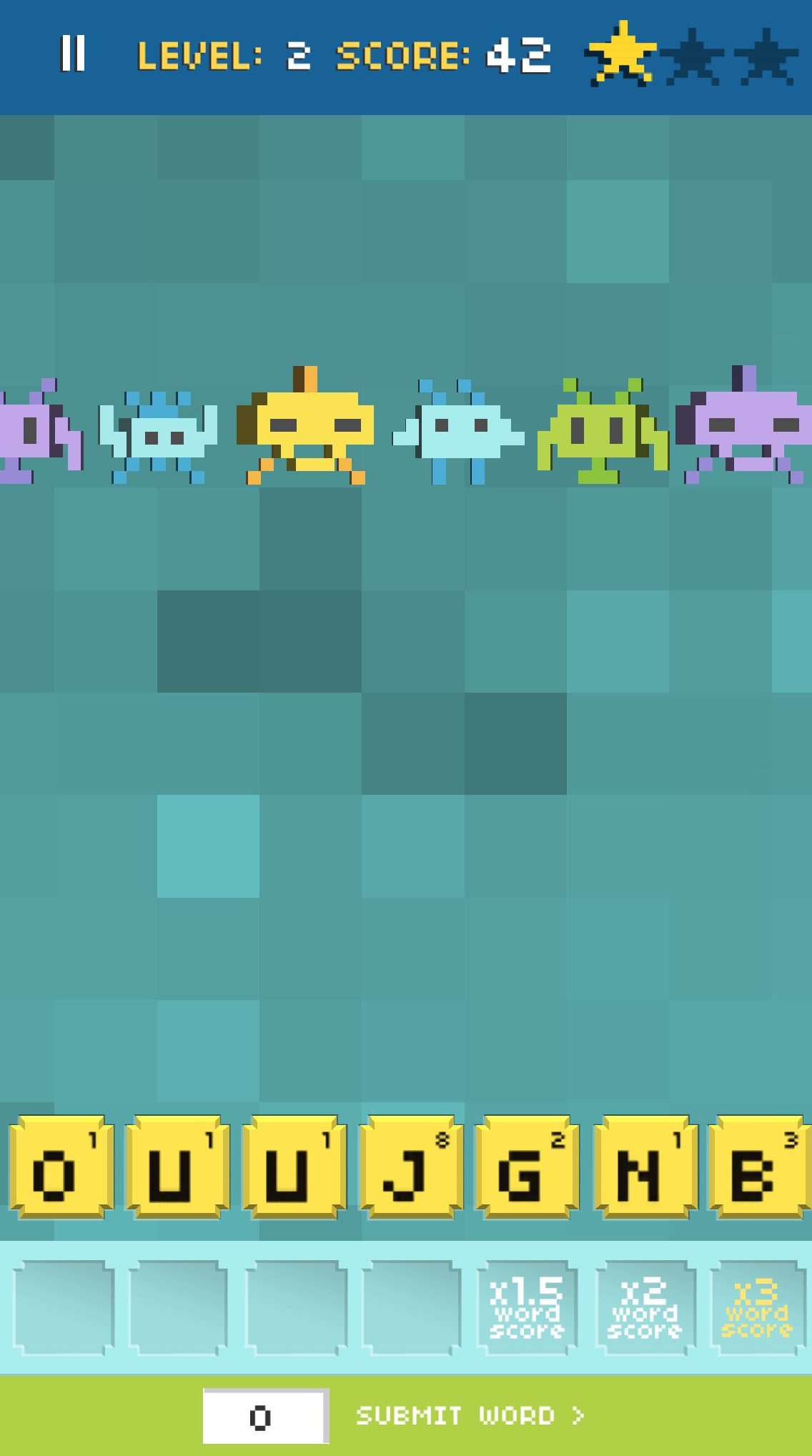 The game takes its visual cues from Space Invaders. So there’s a bunch of blocky aliens making their way down the screen, and it’s up to you to score as many points as possible before they reach the bottom and destroy everything you hold dear.

In this case, everything you hold dear is a bunch of letters. You don’t take damage as such, but the spaceships will blast away at the row of tiles that make up your hand of letters. When one gets hit it’s swapped out for another.

And it’s not just when the tiles are waiting to be shaped into a point-scoring word, either. You slide them into position on a row below the one where they’re stored, and unprotected tiles can be blown up and swapped even when you’re about to submit your eight-letter masterpiece. 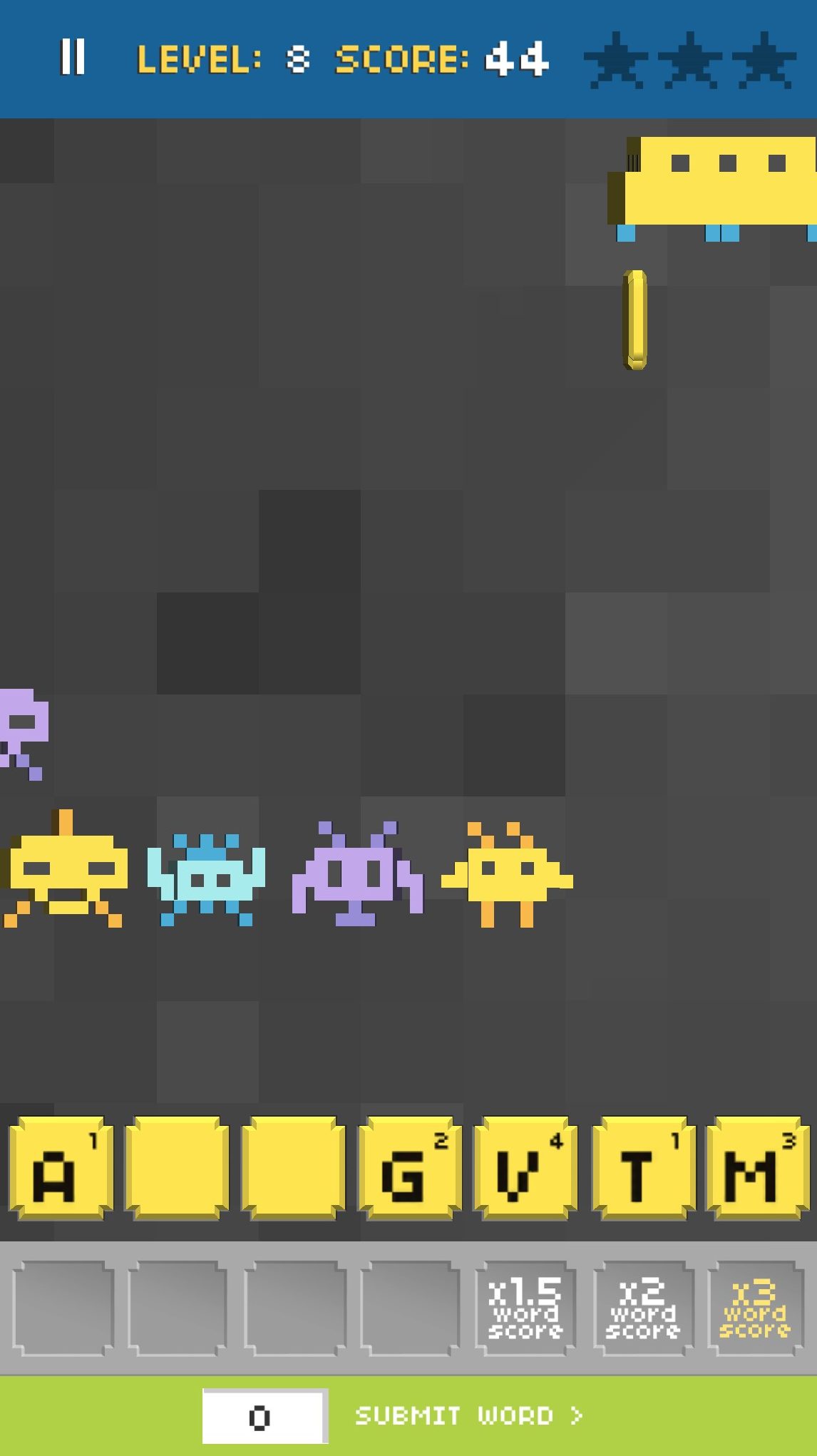 You’re not completely defenseless, though. Words of five letters or more give you a tile that lets you freeze time, allowing you some respite from the incoming wave of invaders. A giant spaceship flies over from time to time and drops blank tiles that you can use as anything, and bomb tiles you can use to blow up your hand and start over.

The game is split into a series of levels, each of which has its own score target. Much like Scrabble, each tile has its own points value, so the harder the letters you’re using and the longer the words you’re making. the bigger your score is going to be.

There are boss fights as well because you can’t really have an arcade game mash-up without some boss fights thrown in there for good measure.

And everything bobbles along at a pretty fast pace. It’s easy to get overwhelmed sometimes, especially when the bad guys are closing in on the bottom of the screen and you’re desperately trying to score a few more points in order to unlock the next challenge.

But to be honest, that’s part of the fun. This is a game that takes the pull-no-punches attitude of early arcade games and mixes it up with the slightly more sedate style of modern word games. The end result isn’t exactly calming, but that pressure adds a frisson to proceedings that a lot of word games just don’t have.

No, it’s not a slow-paced title that lets you sit back and scratch your head, but it is an interesting twist on a couple of genres that you wouldn’t usually think about squooshing together. If you’re into the arcade or being able to spell, then it’s definitely worth a try.