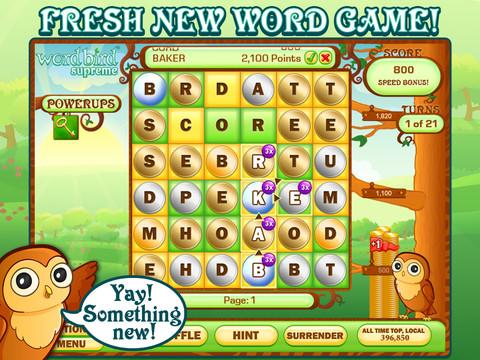 One bird does not make a classic word game

It’s not really surprising that writers should have a secret passion for word games. It’s perhaps more unusual that word puzzles enjoy the immense across-the-board popularity that they do. But people like them, and mobile devices are a natural platform for them, so it’s a very crowded marketplace. That hasn’t deterred developer Funkitron from trying to muscle its way in with the new app Word Bird.

At first glance, Word Bird has nothing to differentiate it from hundreds of other word games. You’re presented with a grid of letters, behind each of which is a coin, and you must trace words across it a bit like a word search. The coins disappear from behind letters you use, adding to your score, and each word must contain at least one coin. You’ve got a set number of words, which increases at incremental score points, and the goal is to clear the coins from as many grids as possible before hitting that limit.

Aficionados of word games will recognize that so far this is little more than a recombination of a number of mechanics common to the genre. The goal of clearing coins and allowing the reuse of letters without them as part of a word is a little different, and brings a bit of extra strategy to the table, but not much. So what does Word Bird offer as a unique selling point?

The answer is a curious angle on the good old fashioned power-up. You start with one of these and can unlock more through play, and you choose a selection of them to use when starting a game. They are not, as in most games, one-shot items with a limited stock, but a permanent change to the mechanics of the game where they’re employed. Your starting one, pattern, gives bonus points for clearing certain patterns in the grid. Others allow you to score words shorter than the usual 2-letter minimum, or automatically clear annoying single coins at the end of a stage.

What they allow you to do, effectively, is customize the game to a style of play that suits you best. Casual players can turn on various shortcuts and helpers to make their lives easier, while people looking for a tougher game can add challenges for big bonus points. It’s a nice touch, and it results in a game that I can’t find a direct competitor to – but still, it’s not enough. In this vastly overpopulated market sector, it fails to differentiate the app sufficiently to make it feel like something new and exciting.

Word Bird doesn’t help itself with its amateurish presentation. The graphics are basic and cartoonish, and the music sounds like it was composed on a thirty-year-old synthesizer. The menus are functional, if wholly unstylish, but they’re somewhat unresponsive, with occasional brief moments of lag between pressing something and getting an effect. But it does cover all the bases: you can change music and sound effect volumes, and the state is saved automatically when you exit in and out of games. 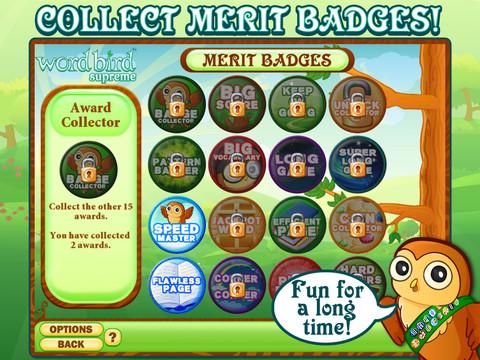 One thing I was pleased to see is a rather comprehensive dictionary. This is an absolutely vital element in word games, as there’s nothing more frustrating than a word you know very well is correct being disallowed, so it’s surprising how many word apps come up short. Thankfully Word Bird doesn’t. It accepted all my lexicological oddities and even suggested one or two words that were new to me, so teaching me a useful lesson.

Aside from the clumsy graphics and sound, there’s nothing essentially wrong with Word Bird. The gameplay is entertaining and interesting enough, and the unlockable power-up elements give it a slightly unusual twist and you a reason to keep coming back for more. But ultimately it doesn’t have the popular appeal of classics like Scrabble, the panache of newcomers like W.E.L.D.E.R.or the genre-blending innovation of games like Quarrel. And with so much hot competition, it feels like Word Bird is going to be of interest to linguistic zealots only.