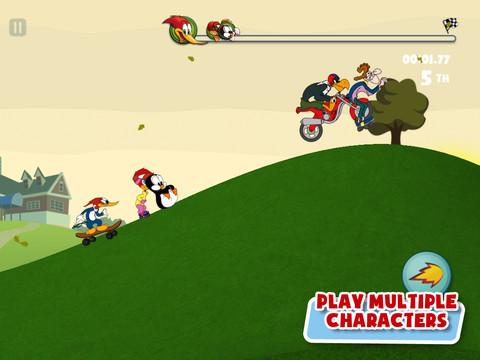 Tiny Wings was a certifiable hit. A nice and simple swoop and glide mechanic with controls boiled down to a single touch made it easy for anyone to pick up and enjoy. There’s nothing quite like the feeling of that perfect dive-bomb, skimming the Earth and then sailing above the clouds in a beautiful arc. But simple and addicting iOS games means inevitable heir apparent, trying to capture lightning in a bottle for the 2nd (or 3rd or 10th) time. Can Woody Woodpecker do it?

As a man in his 30’s (thus a child of the 80’s), I’m keenly aware of who Woody Woodpecker is and enjoyed his antics for many a Saturday afternoon. I’m pretty out of the loop on cartoons nowadays, but are Woody and his pals still relevant? My quick Googling tells me there hasn’t been anything new since 2002, which means a decade of dormancy. Seems like a strange license to pull, but since I’m a fan, I’m all for it.

Woody Woodpecker the game is VERY similar to one of our top 5 iPhone games of 2011, Tiny Wings. So while this review might read as a direct comparison, the two are similar enough that it’s warranted. Luckily they differ in a few key areas that change the game enough that the “ripoff” label doesn’t apply here. Woody Woodpecker is its own game, but with heavy inspiration.

Instead of open-ended flying, the game is broken up into different races in groups that form circuits in different locations. There are three locations (Golf Course, Arctic and Circus) and each one has 10 races. You get “Thumbs Up” depending on where you place, similar to the stars collected in other games like Cut The Rope or Where’s My Water. The races open up in a similar way as well.

In each race you’re able to choose one of a few different characters from the Woody Woodpecker world, including the main man himself. In addition you can play as Ms. Woody, Mr. Meany and more. But all those characters stopped mattering when I realized that I could play as one of my favorite cartoon characters… Chilly Willy. Oh yea.

Each character has slightly different stats for Speed, Acceleration and Handling, but none of them vary too much. Same goes for their weapon attacks, which mess up whoever is in front of you at the time. In a nice touch, they each have their own animation. As I saw Chilly Willy slide down the slopes on his butt before flying airborne, I just had to smile. They nailed the characters pretty well, including Woody’s signature laugh.

One of the compelling things about Tiny Wings is the old-school arcade nature of it. There’s no end, no finish line, no victory. You race until the sun catches up to you. No matter how well you do, you can always go back and do a little better, go a little farther, and a little longer. Woody Woodpecker is the opposite in that it’s a race against other competitors. Do a good job when you cross the finish and you win, that’s the best you can do. It’s finite.

Not that this is a bad thing, just a shift in mentality is all. There are enough different races in Woody Woodpecker, coupled with the fact that you can race each one with different characters with their own little twist that you get more than your bang for the buck.

I do have two complaints however, and after the slickness of Tiny Wings, they’re hard to look past. The first is that when you really start to gain speed and fly high, the game zooms out for you to see everything, but not far enough. As you soar, the ground disappears off screen. This makes it VERY difficult to gauge when to start your dive to slide down the next hill properly. You’re left to sometimes guessing and when you do grab it you end up getting passed by the other racers that didn’t fly as high pretty quickly. This isn’t up for debate, in a game like this you should never have to lose sight of the ground. 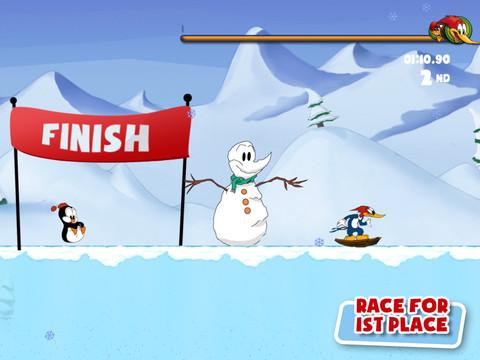 My other issue is the obstacles they use. They come in so fast, and sometimes without warning, that there’s typically nothing you can do to avoid them. For instance, in the Golf Course you sometimes see a rain cloud in the sky. If you hit it, it stuns you and you lose all your speed for a few seconds and fall to the ground. You’re warned by a bolt of lightning right before, but in a game built around finding a nice ebb and flow yin and yang movement, it’s hard to adjust and deviate from it. Likewise, there can be sand traps on the hills that slow you down, but you can’t see them until they’re too close to avoid. It makes the obstacles feel cheap and like they never add to the game, only frustrate.

I really did like Woody Woodpecker, which probably has a lot to do with how much I love Tiny Wings. I don’t think this game surpasses or meets Wings, but it’s a lot of fun on its own. The racing aspect makes you play differently, and the short little races make the game even more bite-sized. I think they could’ve implemented the obstacles better, and they need to fix that zoom so that you can always see the ground.