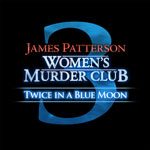 The ladies of the Women’s Murder Club are back for what may be their most challenging case yet. In Twice in a Blue Moon, someone is carefully copying famous serial killers like Jack the Ripper and the Boston Strangler, leaving plenty of evidence but few clues to his identity. Lindsay, Claire, and Cindy frantically try to unravel his riddles before another victim falls prey to his madness.

Twice in a Blue Moon combines hidden object sequences with puzzles to create an intriguing and at times quite difficult mystery for detective Lindsay, medical examiner Claire and reporter Cindy to solve. As in previous WMC games, you’ll switch between characters, using each one’s special talents to help solve the case. Lindsay confronts suspects and snoops around crime scenes, Claire tries to make sense of the forensic evidence, and Cindy digs deep to find hidden motivations and new leads of investigation. Of the three, Claire gets the shortest shrift. Her sections are largely limited to scanning an area with a UV light to find hidden items or clues, then returning to her lab for a brief logic puzzle involving the proper arrangement of bottles of solvent.

Lindsay and Cindy fare far better. Both will have to find a list of objects in a variety of hidden object levels. Sometimes the items make sense, such as when Cindy has to find a set of crime CDs, but much of the time the objects are fairly random. What I appreciated, though, was the game’s attempt to maintain a certain amount of realism in the hidden object sections. The items you have to find are appropriate to the locations you’re searching and placed in areas where they might – with a bit of imagination – actually end up. Rulers don’t magically adhere to the wall, hot air balloons aren’t hidden in potted plants. A lot of thought was clearly put into the assembly of the hidden object scenes, and it makes for a very satisfying hunting experience.

Once you’ve found everything you need to locate, you usually have to use at least some of those items to solve a puzzle. The puzzles include everything from hangman-style word games to the killer’s devious riddles, and solving them will take some creative thinking. You can skip any that prove too frustrating, which I’m not ashamed to say I did when it came to a jigsaw-style puzzle involving those crime CDs of Cindy’s.

Cindy’s database searches, a common activity in WMC games, have been made a bit easier; now, the correct words can be found on a sticky note just below her computer monitor. That’s sure to be a disappointment for anyone who enjoyed figuring them out on their own, but it’s extremely helpful for those of us who could never quite figure out the right set of keywords to enter into the computer.

The story of Twice in a Blue Moon, which is deliciously creepy, is told via comic book-style cutscenes between chapters. Previously, you had to either had to skip the scenes entirely or wait for what seemed like an eternity as they slowly revealed themselves, panel by panel, but now the entire scene is displayed at once, and you can advance it whenever you like. It’s a small change, but it makes a huge impact on the enjoyment and playability of the game. Being able to proceed at your own pace – whatever that may be – always makes a game experience better.

Women’s Murder Club: Twice in a Blue Moon is the best installment in the series yet, but it’s disappointing that Claire has yet to be expanded into a decent character. Her forensic sequences could make for great puzzle-solving, but instead they still feel like tacked-on afterthoughts. They don’t make the game any less fun, but they do feel like wasted opportunities.

Overall, Twice in a Blue Moon provides an  excellent assortment of hidden object searching and puzzle solving, while maintaining a realistic atmosphere and some genuine tension. Welcome to the Club!