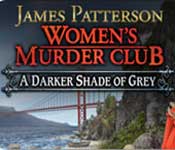 As more and more hidden object games are released, it sometimes feels like the best we can hope for is one that isn’t terrible, because finding one that’s truly great is a pipe dream. And then a game like Women’s Murder Club: A Darker Shade of Grey comes along and reminds us that even in a genre cluttered with repetitious and sloppily-made junk, you can still find examples of brilliance and ingenuity.

This second installment in the Women’s Murder Club series deals with the death of a young student at a military academy. At first, his fall from a cliff seems like little more than a tragic jogging accident, and the school’s headmaster is eager to have the case closed – a little too eager for Detective Lindsay Boxer’s liking. With a little help from medical examiner Claire Washburn and reporter Cindy Thomas, Lindsay begins digging deeper into the so-called accident.

During the course of the investigation, you’ll play as all three characters, though the bulk of your time will be spent helping  Lindsay uncover clues and gather evidence. Gameplay alternates between puzzle solving segments and hidden object levels, though they’re not quite the kind of hidden object scenarios you’re used to. Instead of scanning an attic for three swords, a top hat, a baseball and a boot, you search an office for the remnants of a shredded fax or a desk for boxes of microfiche.

The locations don’t break the realism of the plot by being too outlandish or asking you to find something you wouldn’t genuinely find useful. And yet despite sticking to relatively plausible scenarios – or perhaps because of it – the object-seeking segments of the game stay fresh and creative right up until the very end.

The puzzle segments are where A Darker Shade of Grey really shines, though. Whether it’s deducing a newspaper archivist’s bizarre filing system or translating a message in Morse Code, the game is constantly throwing new and clever challenges at you. Plenty of them are fun enough to replay on their own, but if they ever prove too difficult (I never could figure out the right words to use in the database search), you always have the option to skip them. The hints are plentiful as well; you get five per chapter, and whatever you don’t use carries over into the next round.

The extra help is to ensure that everyone can make it to the end of the story and find out whodunnit, and it’s a story that’s well worth finishing. Rather than being tacked on simply to give you an excuse to be rummaging through attics and trunks, the plot of Darker Shade of Grey is intriguing and well thought-out, with twists and turns worthy of a James Patterson novel.

A Darker Shade of Grey is sharp, intelligent, and inventive, but it does disappoint in two minor ways. First, the levels in which you play as medical examiner Claire are pointless and annoying. In the previous WMC title, you figured out the order in which to use your chemicals by solving progressively more difficult logic puzzles. In this game, you simply have to pull the appropriate bottle off a conveyor belt as it trundles by. There’s absolutely no challenge at all, which makes the sections feel less like a challenge and more like busywork.

Secondly, the cutscenes that advance the story between chapters go by at a snail’s pace, and there’s no way to speed them up. Given that they’re presented like pages in a comic book, you should be able to click through once you’ve read the text, but you’re stuck either waiting for the scene to advance or skipping it entirely. New characters and clues are introduced in the scenes, so skipping them isn’t an option if you want to have any chance of following the story.

These are minor annoyances only, though, in what is otherwise a smart, inventive and thoroughly entertaining game. If you feel like every hidden object game you’ve played recently is indistinguishable from the one you played before, you’ll be thrilled at how refreshingly different A Darker Shade of Grey is. Even if you don’t consider yourself a fan of the genre, the mystery and puzzles are more than enough to keep you playing right up to the very end.