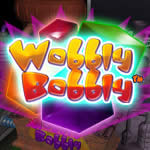 Everyone loves dessert – unless, of course, you live in the sleepy little town where action-packed puzzler Wobbly Bobbly is set. For the residents of this quiet hamlet, about to be overrun with delicious, gelatin-based goop, it’s a potential nightmare, in fact. Thankfully, that’s where you come in, taking on the role of a cute little metallic robot tasked with keeping the burg from being overrun. It’s a dirty job, certainly. However, trust us when we say that, at least for the first hew hours, you’ll have a good time doing it.

Frankly, the action itself offers little in the way of innovative features, yet will still satisfy nonetheless. Essentially, you must use your mouse to rotate the droid around the perimeter of each playfield presented, aiming at a quickly-rising platform covered in pastel-colored, jiggling cubes. (It’s even possible to slide around the sides of the screen, ensuring you’ll have no trouble making horizontal, vertical and even diagonal shots.) Clicking to send similarly-styled squares of sugary goodness at the advancing hoard, your goal is simply to clear each stage before the mounds of sweets break the line of tape at the top of the screen.

Predictably, doing so requires firing colored cubes so that they land next to two or more squares of identical hue, all of which instantly disappear from play on impact and send anything atop them crashing downward. While moving through largely nondescript, if goofy backdrops like the Boiler Room and Ingredients Room, you’ll find additional challenges are presented that made this objective much harder, though.

All told, the title’s solid enough, and certainly hand-cramping, with the difficulty ramp-up following initial levels fairly pronounced. However, nice as cinematic scenes, sound bytes and background touches are, actual in-game objects, animation and special effects could use a considerable boost in visual quality. What’s more, while earning point-scoring combos by eliminating multiple pieces of fruit or several gelatin stacks in a single swoop is nice, twists aren’t so compelling or regularly presented that’ll you stay glued to the PC for overly long.

Best experienced in short, bite-sized spurts, Wobbly Bobbly is a perfectly compelling little diversion whose 100 levels offer decent enough value for the money. It’s just hard to see besides folks with a serious sweet tooth gorging on the game’s cavity-filled charms for any extended length of time, or going back after beating the title for second helpings.