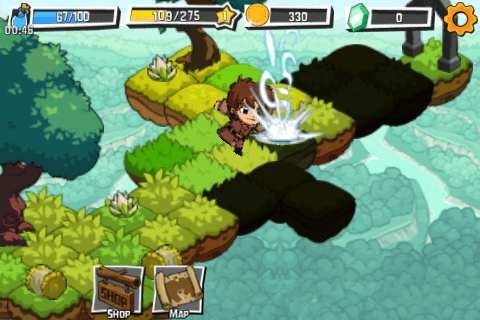 RPG elements have a habit of making their way into just about everything from shooters to puzzle games. With that in mind it’s not all that surprising to see those same aspects (loot, experience, quests and so on) make their way into what can best be described as some kind of fantasy world scratch-off ticket with some pretty hefty stakes. Everything about Wizardlings suits the freemium perfectly, except for the myriad of bugs and glitches.

When the world is covered in darkness someone has to venture forth to bring back the light. That someone is a fledgling wizard (get it?) with barely enough magical know-how to get by. But get by they must if they’re to restore the world to its proper form.

Each level is comprised of several tiles shrouded in shadow that must be revealed one at a time. Doing so costs a bit of magic, which is taken from a pool that regenerates in real time but also has a tendency to reveal treasures and spell components. Sometimes an enemy will even make an appearance and players will have to dispatch them before they can restore the occupied space.

Basic attacks can whittle an opponent down, but this tactic usually takes several turns that can really impede progress, since damage translates to a loss of magic rather than health. The trick is that many enemies are weak against specific elements and can be defeated much faster with prepared spells.

Every single aspect of Wizardlings is deliberate and has significance. Restoring dark tiles can provide coins to purchase better gear. Components are needed to produce strong elemental spells. Keys unlock treasure chests. Treasures can be “handed in” as a set for large sums of cash. Bad guys that bestow plenty of experience. The list goes on and on.

Levels can be revisited at any time in order to grab a chest that there wasn’t a key for initially, or to open up pathways that require specific items to access. And, of course, gaining levels unlocks more equipment options in the store and give plenty of incentive to save up those coins.

The unfortunate problem with Wizardlings is that it’s riddled with all manner of instabilities. The Quest button didn’t appear for the first few levels, and sometimes the game jumped back to the initial loading screen for no discernable reason. It took several restarts for the proper gem count (special in-app-purchase money) to display, and there was some significant lag when generating special spells. Many times I’ve had to exit a level and re-enter because a few tiles refused to convert.

If the Wi-Fi or 3G connection is middling or worse, the game lags so much it almost becomes unplayable. I’ve also encountered a fairly significant bug that refuses to “count” any keys I’ve picked up, thus making it impossible for me to open any chests. I hate that one the most because it both robs me of my goodies and won’t let me officially reach 100% completion.

There’s so much theoretical enjoyment to be had with Wizardlings that it pains me to see it in such a state. As a casual, play when there’s a spare moment kind of freemium game, it’s incredibly well conceived and well worth killing time with. It’s just that the laundry list of bugs and glitches make it almost entirely unpalatable. With an update or two it could really be a wonderful title for iOS gamers who don’t mind a little casual play but detest the thought of growing vegetables. Until that happens, however, it’s something of a disappointment.