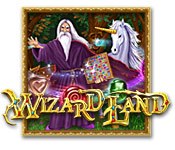 It’s rare that a game can come completely out of nowhere and impress, particularly in the sometimes-tired puzzle genre. Looking at the screenshots for Wizard Land, the latest from developer Rumbic Studio, it looks like an average puzzle game. But looks are deceiving, and seen in action, Wizard Land is one of the best puzzle games to have come along in a long time.

The story for Wizard Land isn’t awe-inspiring. A land has been overrun by evil wizards, who have turned the land’s source of power (a magical flower) into stone, along with the land’s protector, a magical fairy. You, as the oldest wizard remaining, travel across the land to restore the power of the flower to the people, and save Wizard Land.

The first thing that strikes are the fabulous graphics and sound. The whole game is colorful, full of little flourishes and details. The custom cursor is a jewel that lightly pulsates. Water streams through crevices on a rock on the title screen. The map screen is extremely detailed, and magical effects and sparkles are abundant. Lots of care went into crafting this one.

The audio is no slouch either, with high-quality tunes that don’t loop very quickly. Even the title screen’s looping track takes a while, with a choir singing the game’s title after a minute or two. And though the wizard has a voice, it never gets annoying, delivering the same lines in different ways to keep commentary on your gameplay fresh.

But it’s not enough to have a pretty face. The gameplay has to match the pretty pictures, and Wizard Land delivers. In a nutshell, there are three gameplay modes: group mode (click on groups of like-colored tiles three or larger to break them), chain mode (click and drag a trail of three or more like-colored tiles to break them) or swap mode (the tradition match-three tile swap).

But here, you can play all three any time you wish.

Wizard Land‘s gameplay is extremely dynamic. At the bottom of the screen are tabs which allow you to select which type of gameplay you’d like to use at any given time. The goals of Wizard Land are pretty typical, breaking a colored tile underneath by making matches with symbols on top. But the ability to start with group mode to begin the progress, then fine-tune with either chain or swap modes (or, frankly, any other method you’d like) creates an element of strategy absent in most puzzle games. Granted, you have to play a mode for a certain length of time before you can change modes, and the pieces re-shuffle when you switch, but it makes for a constantly-changing challenge.

How many times have you played a match-three where there’s that last tile to destroy, and you pray a power-up might appear? In Wizard Land, you don’t have to wait long. The game has two basic power-ups, a shuffle which re-arranges the tiles on-screen or the Mega Bonus, which randomly destroys a bunch of tiles on the board, often the one you need destroys. Both power-ups refill over time, so you’re never stuck. And even though those are the only two power-ups in the game, Wizard Land doesn’t feel poorer for it. Besides, there’s one more thing you can do to help move thing along.

Along the sides of the playfield are two arrows, one pointing clockwise, the other counter-clockwise. If you click on one, the entire board rotates 90 degrees! This amazingly original mechanic can be done every time, and is very helpful in eliminating that "one last piece." And when combines with the three different gammeplay modes, keeps the action constant and fun.  You can even do rotatons in the middle of combinations.

But there is an even more amazing use of rotation for finishing a level. After you destroy all the colored tiles, a key and lock appear on the board, and you have to guide the key along a path (denoted by easy-to-see dotted borders and a light gliding along the path) to the lock. The path, though, will be winding, so you have to change what direction "down" is in order to drop the key along the path, then rotate the board to keep the key moving. However, later levels will have the path splitting, and if you blindly drop the key too far, you’ll have to double back a bit, carefully dropping the key one block at a time. It’s a great challenge, and highly original.

You’re scored at the end of each level based on how many blocks you destroys, how many combos you made and how much time was taken. During the game, you’ll hear the wizard gleefully calling out extra bonuses as you play (like "Energy Master!" if you break a lot of enchanted tiles which has little bits of extra destructive power, or "Swap Master!" if you make a lot of successive matches in swap mode in a short time). It’s very satisfying to hear commentary on your world-saving skills, especially when vast numbers of tiles exploding with light, color and magical particles flying everywhere.

There are only two main modes in Wizard Land, timed and untimed. (Timed in particular can be very challenging as some levels can take longer than others.) But given that there are about 90 levels, and each level is as dynamic as the last, Wizard Land offers hours of amazing, original puzzle gameplay. Given how few stand-out puzzlers are out there, Wizard Land is definitely not to be missed.