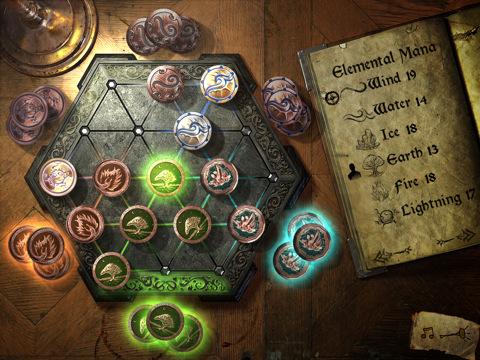 One of my main reasons for wanting an iPad was the promise of playing digital versions of board games with an even better setup than my iPod touch. The idea of putting the iPad down on the table to really simulate the experience was too good to resist. So far I’ve been rewarded handsomely for my purchase with games like Small World and Carcassonne filling my time. Now I can add Wizard Hex, a game playable on both my iPad and iPod Touch, to that list!

Wizard Hex is a control game that takes place on a, you guessed it, a hex shaped board. There are six edges around the play field and at each one resides a different element; Wind, Water, Fire, Ice, Earth and Lightning. Players take turns placing discs representing their elements on the board in order to control as much area as possible and attack opponents. When all the spaces are filled the game ends, and whoever controls the most area wins. As such the game can handle up to six players with any mix between human and AI controllers. This allows for some nice flexibility.

The most interesting aspect of Wizard Hex is the idea that each element has allies, which are the ones directly adjacent to them around the edge of the board. The relationship with them is different than the others on that board. During your turn you can actually choose to play one of your allies instead of your own, which opens some interesting strategies. Depending on where and how many players there are, it’s also possible that you could have access to some of your opponents pieces! It’s a little complex, but begins to make sense once it’s explained to you and you see it in action for a few games. After that the strategies really start to open themselves up. It’s sadly this fact that also reveals the game’s biggest weakness.

With all these great things to say about Wizard Hex, it’s a shame I have to bring up one pretty big negative. The app does a horrible job explaining how the game works to the player. After not finding a tutorial in the game anywhere, I just decided to play a few times to get the hang of it. They give you the barest of instructions (play 1 disc, now play 2) and give you absolutely no rules or strategy whatsoever. Luckily I was at my computer while I played, as I eventually found my way to YouTube where I found a video by the developers that does a very good job explaining what’s going on. That info really needs to be included in the app itself, though. Surely they don’t expect us all to hit the internet to figure out how to play the game, do they?

After playing a few more games, I accidentally tapped the screen in a spot that was apparently an arrow that does supply a bit more info. Super strange to hide such a button, a highlight or simply the word “next” under it would’ve stopped it from just looking ornamental to actually being functional. Not that it mattered much, as even then they only give you the very basics. In fact, the ink on one page fades out (hopefully on purpose) and the next page is totally blank.

Wizard Hex is a very solid game that provides a great amount of depth to it… once you learn it. I’m afraid the lack of instruction or guidance will only serve to scare people away before they’ve had a chance to see what’s it’s really about, and that would be a tremendous shame. This is really a fun, great looking game that looks equally fantastic on the iPad and iPhone, and it’s definitely rewarding once you spend the time to learn how to play it well.