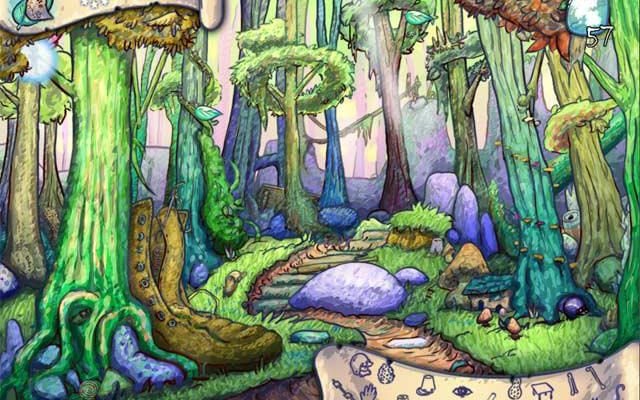 Wispa Forest would be a fairly run of the mill hidden object title if not for one outstanding feature: beautiful watercolor graphics in pretty shades of turquoise and mauve that reflect the game’s relaxing nature-friendly theme.

Your job is to help a little fairy named Lyia investigate a darkness that she senses is encroaching onto her idyllic homeland. A nice break from murder-mystery HOGs where you have to search through bleak alleyways, bland offices, and nondescript hotel lobbies, each scene in Wispa Forest is literally magical. Even the usual hidden object clutter (mailboxes, golf clubs, and so on) don’t seem awkwardly shoe-horned into the scenes since everything is painted in the same mellow style. You soon find out that the presence of “foreign” objects in the land of fairies is part of the story anyway. 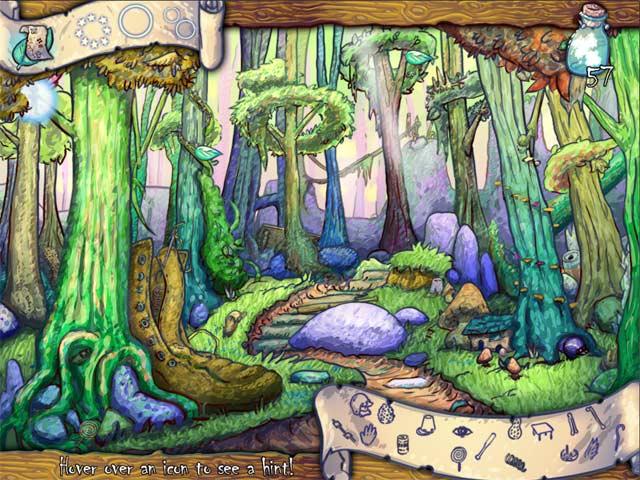 Each time you click on an object, Lyia – portrayed as a tiny fairy hovering on the screen – flutters over to the item to pick it up. If you’re quick enough to click on a second object before she’s reached the first one, you’ll start a combo. This is a fun feature, but don’t expect it to happen that often because she moves very quickly.

Along the way, Lyia encounters obstacles like forest baddies, which she must vanquish with her powers. a match-3 variant called Mana Match, where have to match magical symbols over the “corrupted tiles” to get rid of them. The twist? You’re playing against an opponent – each time you clear a corruption tile, the monster loses a heart. If you take too long, more corrupt tiles appear on the board.

In spite of its charms, Wispa Forest doesn’t quite have all of its ducks in a row. The hints – which activate as large circles around objects – are too large to be precise, and items are sometimes very hard to see. Thankfully you can easily earn more hints by racking up mana, so you shouldn’t ever find yourself stuck. More than one type of mini-game would have been nice since Mana Match isn’t deep enough to be as satisfying as, say, the battle match-3 games in Puzzle Quest. Your reward for completing levels is watch a special screen called the Sanctuary fill in with knick-knacks, which isn’t as compelling as it could have been.

Wispa Forest is cute and pretty though; at the very least it’s worth downloading the demo to see if the game’s unique art style suits your fancy. And if it does, the stage is already set for a sequel.