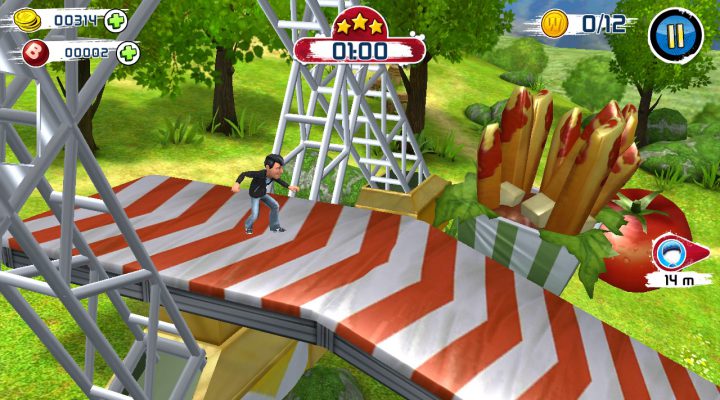 An average platformer based around a popular gameshow.

Most IAPs can be earned in-game.

Makes no effort to innovate.

I have fond memories of eating junk food and watching clips of Takeshi’s Castle (also MXC) with my friends after a boring day of Middle School. When I was twelve, watching hyper-energetic Japanese people run through a frustrating obstacle course was hilarious. I had no idea what they were shouting, but the foreign language added a weird bit of charm to the ridiculous show, and ultimately helped it standout from anything else on television.

The show ended up catching on in America, and years later, in 2008, ABC’s Wipeout debuted. Despite a lawsuit from the Tokyo Broadcasting System (claiming the show was a blatant copy of Takeshi’s Castle), Wipeout continues to air in the United States to this day.

Before I booted up Wipeout 2, I checked out some clips of Wipeout on YouTube. It was about the same sort of experience I remembered watching back in 2002, filled with goofy sound effects and bad puns courtesy of the announcers. So, satisfied that I was certain I knew what I was getting into, I booted up Wipeout 2.

One of the first things I realized about Wipeout 2 is that the game loses something when you know the body flopping around on the screen has no shame attached to it. You don’t get to watch the person pick themselves out of the mud with a sheepish grin on their face, or enjoy the moment when a cocky contestant misses their first step and belly flops into the water. A large part of what makes the show so enjoyable is instantly lost with the game version.

But that’s ok, because Wipeout 2 isn’t trying to replace the television show, it’s just attempting to add onto the franchise. So what does it add? 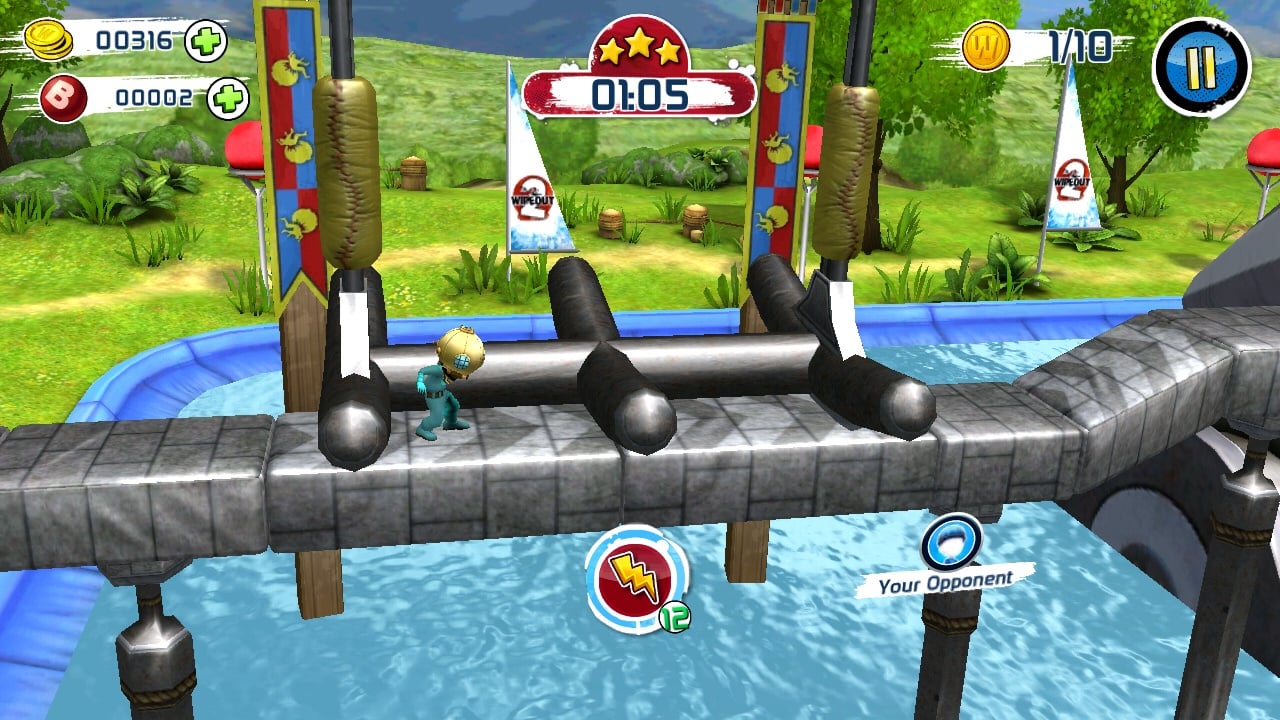 As a whole, Wipeout 2 is a so-so platformer with only the franchise branding keeping it sticking out from the crowd.

Players control a contestant who must rush through an obstacle course as quickly as possible. Even though it looks like one, Wipeout 2 is not an endless runner, and I found out the hard way that the game should not be treated like one. Taking a second to stop and assess an obstacle is always a smart move, as sometimes a swinging obstacle comes into view that was previously unseen.

Running blindly through the course will usually always result in a quick trip to the pool of water beneath the platforms. Getting to the end of the course is usually only a matter of timing jumps and slides. I say “usually” because sometimes the courses feature these bulbous balls that players have to bounce around on. These balls were the bane of my experience in Wipeout 2. 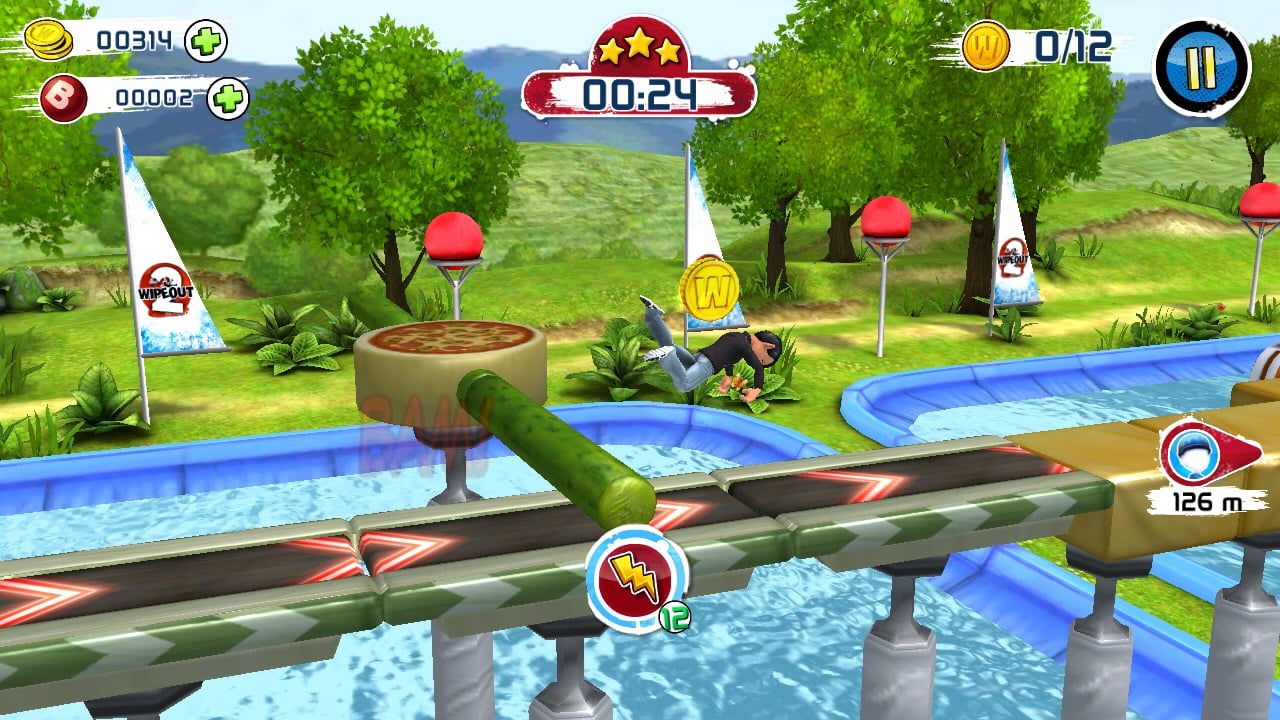 This is a good point to bring up how somewhat rigid the controls are in Wipeout 2. To run, players have to slide their finger horizontally across the screen. That’s easy. But for some reason, when you bounce, you lose ease of movement by a great deal. Adjusting your position mid-bounce is basically impossible, so if you mess up on your first bounce, you typically can’t recover.

Top that off with having the clock keep ticking while you watch your lifeless avatar plummet to the pool below, then the Wipeout logo slamming down into your screen, and you’re looking at ten seconds lost each time you mess up. If you mess up two or three times early on in a course, you’re more than likely not going to finish it in time. Restarting wouldn’t be a big deal if you weren’t limited to a few runs for a set amount of time.

You guessed it though; you can buy more runs in exchange for your pocket change. 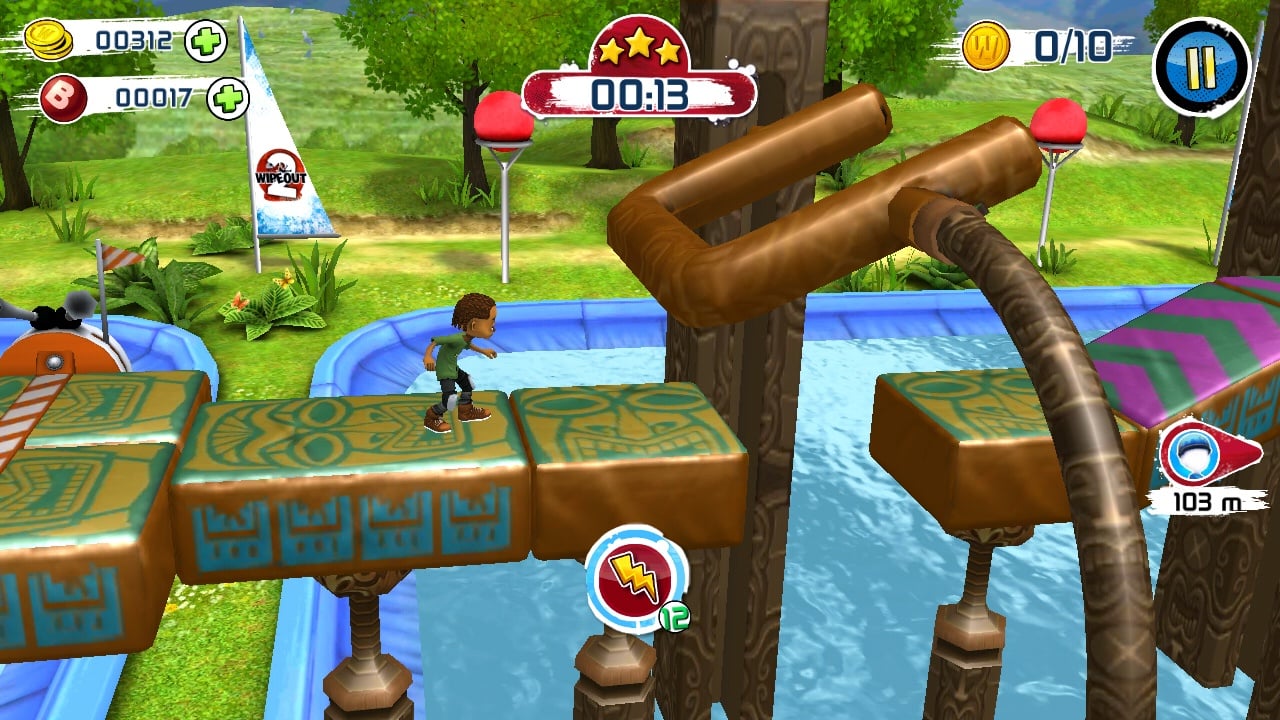 The other in-app purchases include perks like being able to teleport ahead, speed boosts, rewind abilities, and unlockables that double the amount of rewards you earn at the end of each level and season. Everything except the coin/chest doubler can be earned in game by simply completing the courses over time.

The cosmetic skins and additional character models can be purchsed with cash, or gradually unlocked using the in-game currency “ballsy bucks”. Unlocking anything with the ballsy bucks will take awhile though; you only get one ballsy buck per completed course, and some characters cost up to 200 ballsy bucks to unlock. Meanwhile you can purchase 110 ballsy bucks for $4.99. 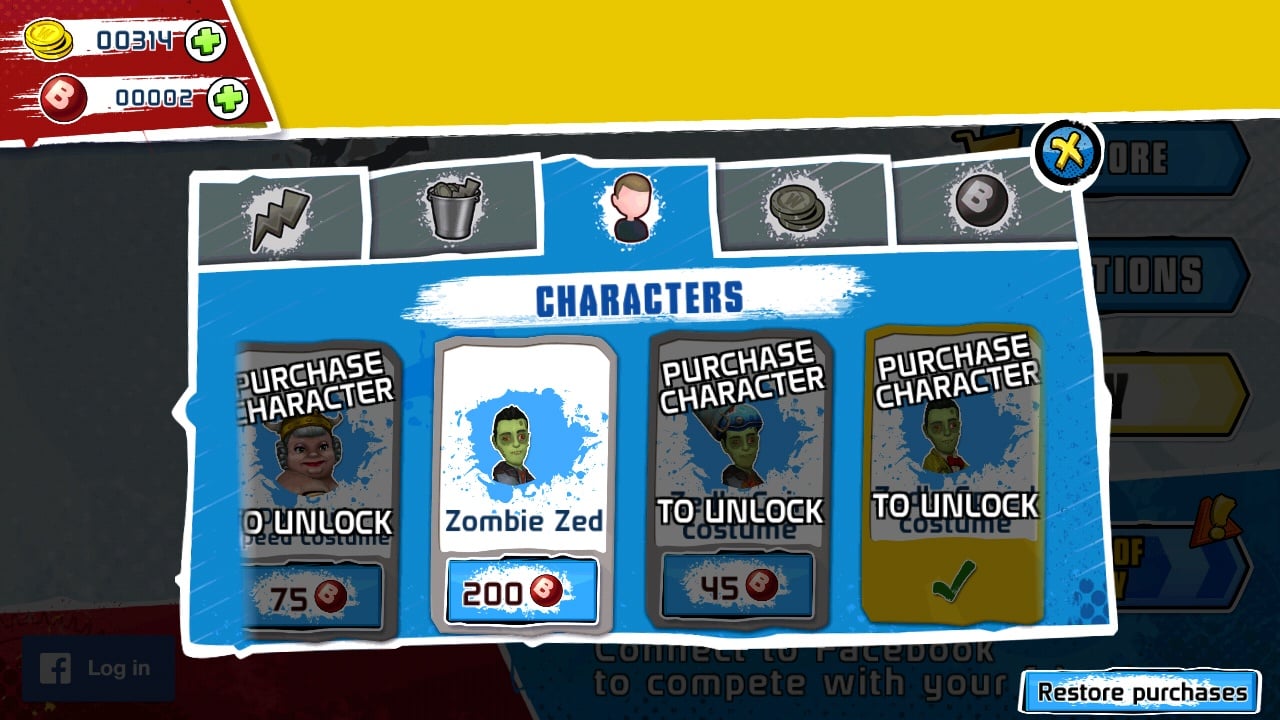 Every nine courses counts as a season, and by completing a season, players are rewarded with a prize chest. The two prize chests I was rewarded with both contained alternative contestant costumes, one of which claimed to offer a speed boost, but the difference wasn’t significant.

Overall, Wipeout 2 may interest fans of the show, and it does offer some replay value by tracking the distance your Facebook friends make it through a course. But that’s only there if any of your Facebook friends are actually playing the game. If you have never seen Wipeout, or any other show like it, what you’re getting here is a just-average platformer with some control issues — a very forgettable experience by the finish line.