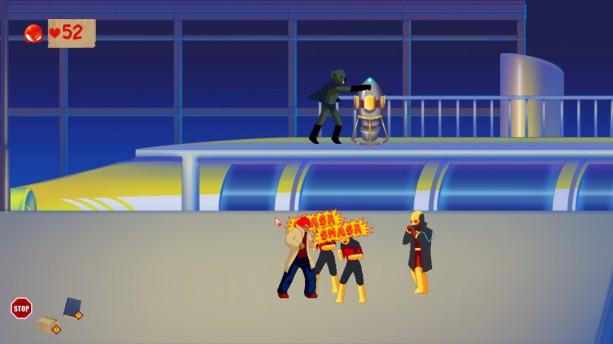 For food? I’d fight for a little more fun.

Will Fight For Foodis a role-playing…fighting game? Two genres that you don’t often see slapped together. Imagine a 2D side-scrolling RPG with areas to explore, items to collect and fetch quests galore, then throw in a truckload of button-bashing fighting sequences. Let it simmer for a few hours, and you’ve got this latest release from Pyrodactyl Games.

While the RPG elements behindWill Fight For Foodare solid enough, the beat-em-up parts aren’t so tightly assembled as to work the way they should. As a concept, the game should be commended and we definitely hope to see something like it again in the future, but this particular game is a little too amateurish and lacking to have the staying power for which it makes me hunger… pun intended.

You are Jared, a WFF wrestler (he writes, narrowly avoiding copyright infringement) who leaves town in shame after being knocked out of the tournament. Which one?Thetournament, obviously!He returns many years later for revenge, and finds a whole lot more than he bargained for, as the entire town is on the brink of collapse thanks to newly appointed, evil powers that be.

By talking with the people of the town, including old wrestling buddies and opponents, Jared pieces together what has happened, and how it fits into his own life. Depending on how you decide to approach certain situations, your actions going forward then determine the fate of your humble home town.

Diversity of approach is one of the game’s key strengths. Jared can simply talk to people and work problems out amicably, or he can throw his wrestling mask on and pummel them into submission. Every decision you can make be solved via being brain or brawn, manners or mayhem, and the route you decide to take will affect how people respond to you and how your story pans out. LikeMass Effect…with fists.

Truthfully, though, there are some really nice touches when it comes to decision making that drive home a feeling of multiplicity. When talking to a group of people, for example, you’re given the option to persuade them and make them come around to your way of thinking, via body language and the tone of your voice. It’s nothing groundbreaking, but it definitely gives the conversations that little extraje ne sais quoi.

Will Fight For Fooddoesn’t look or sound too shabby either. It won’t win any beauty contests, but it does a good job of setting the scene, and each character’s wrestling costume makes them really quite memorable. I especially love how, when you slip your own mask on, heavy rock is layered over the current music to indicate that you’re ready to kick some butt.While there are plenty of nice ideas bundled into the game, though, there’s a rather large issue running throughout – for a game that is so heavily focused on fighting, the brawling gameplay is very poor.

There are combos you can pull off by pressing combinations of buttons, and the fighting animations aren’ttoopainful. However, it all simply comes down to standing still and button-bashing enemies to death, and even then, it comes off more frustrating than addictive as characters entwine and complicate the would-be simple controls. Multiple times over, I ended up dying because I simply couldn’t move thanks to enemies punching me over and over again, without any nuance available to escape. 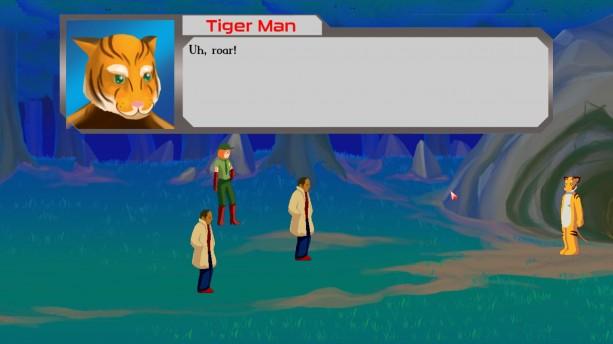 There seems to be no rhyme or reason as to how fighting helps, either. At certain points, when a character wouldn’t let me progress, for example, I got reared up, switched to the mask, started to punch and kick him… all to no avail. He just stood there. As if suspended from play, with no indication that he wasn’t a part of my journey. If you’re going to have a good vs. evil theme running throughout your game, you need to keep it going everywhere, otherwise it doesn’t make sense!Will Fight For Foodis a great concept that has been somewhat poorly executed. If you can put up with the fighting sections, though, then there’s a decent adventure game to be found underneath. It’s just a shame I have to say that about a game withfightin the title. Definitely give some pause and check out the demo if this sounds like your cup of tea.