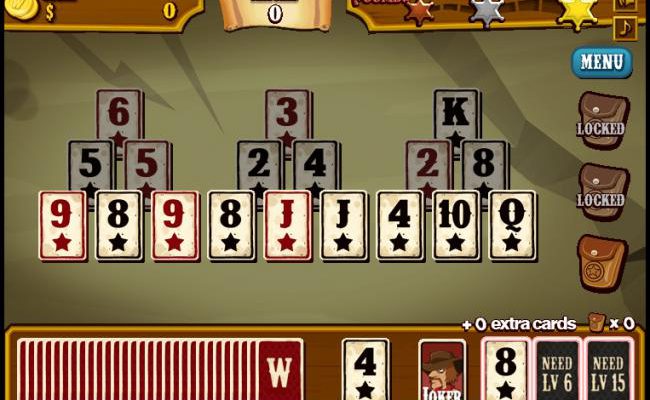 WildWest Solitaire combines Spider Solitaire with the West on Facebook

Card games are often a great fit for the web. They don’t take much time and can be a lot of fun strategically. Pangalore is looking to capitalize on that with its newly released Facebook title of WildWest Solitaire. Though the game of Solitaire is a bit dated, Pangalore is mixing it up with the PC game of Spider Solitaire and combining it with Mahjong and a western them. Nevertheless, while the application contains some good ideas, it ultimately comes off as rather dull and repetitious.

You take on the role of some sort of cowboy working their way through the wild west in seek of wanted criminals. By some loose justification, you capture them via your “card shark skills.” To progress through the game, you must travel through various locals to capture the next outlaw on the list, and to do so you are required to collect an item called “Badges.” 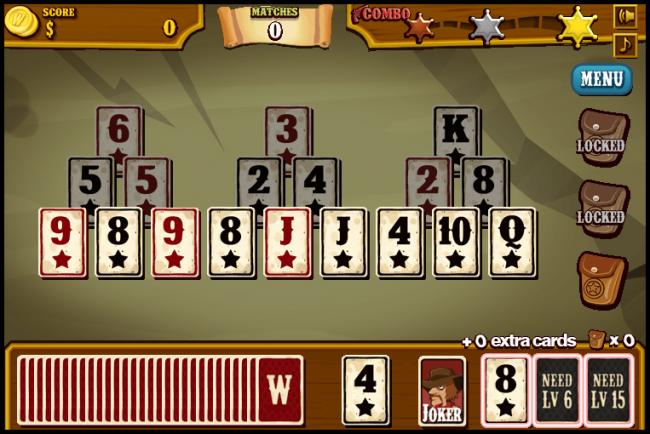 Badges are collected primarily from the card game itself, which plays very similarly to Spider Solitaire combined with Mahjong. You are granted a layout of cards, with some partially on top of others. At the bottom of the screen, there is a deck of cards with one face up. The idea is to remove cards from the layout by placing one that is either one face value higher or lower than the one face up by the deck. As the layout is layered, cards on the bottom cannot be removed until all those on top are.

This means that you will not always have an applicable card to play, so to deal with this, it is possible to draw from the deck in the lower left until a match is presented. Also, you can make use of a Joker card (a wild card that is usable every few games), “extra cards” in the lower right, and the ability to reshuffle the entire layout. Unfortunately, using these latter abilities requires players to either purchase them in-app or be gifted them from friends.

The core concept of WildWest Solitaire is an interesting idea, and can be enjoyable, but the downside is dramatic repetitiveness. In order to progress, you are required to collect a rather large sum of badges. Only a fraction of this total tends to be collected per game play, thus you end up replaying the exact same card layout several times. To mitigate this slightly, it is possible to earn more by building up combos (by not drawing from the deck), but some of the layouts are so small that it’s virtually impossible to do effectively. As you progress, thankfully, they do become a bit more complex and interesting, but it’s like pulling teeth to get to them. 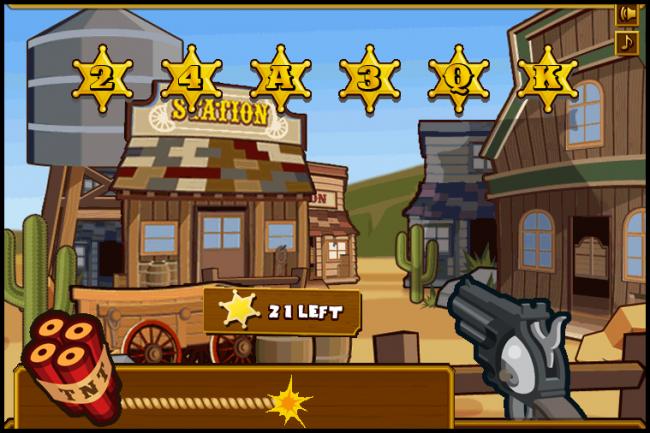 The other element that hinders any sort of planning is that the game is timed by default. With only 90 seconds to play you don’t always have enough time to really think. Additionally you will not finish clearing all the cards in a layout every time either. Should you manage to clear them, you’ll earn more badges via a timed mini-game that tasks you to shoot gold badges, labeled with random sets of card numbers, in the right order (this a numerical order that goes either forward or backward based on the cards presented).

Outside of this mode, there is an un-timed “Tournament” mode. There is nothing tremendously special of merit here, but it focuses solely on earning a high score and beating your friends on a leaderboard.

Overall, WildWest Solitaire shows promise, as the card aspect of it is actually fun. Nevertheless, it feels as if the developer was trying to create some sort of progression curve, with the acquiring of badges, that just doesn’t fit. A game that combines Spider Solitaire and Mahjong is, for all intents and purposes, a puzzle game, and earning and completing puzzles is a reward and sense of progression all on its own. The additions Pangalore has added simply bog down the rest of the game, making the experience generally dull and repetitive.