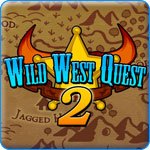 Like countless B-movie Westerns, the story of Anarchy Enterprises’ Wild West Quest 2 mixes prospectors, bandits, ranchers and sheriffs in a tale of revenge and standard genre fare. Most of the game is easy and it’s very short. Fans of Westerns will enjoy the story and diehard hidden object fans will get an hour or two of acceptable gameplay in a Wild West setting.

In the first Wild West Quest, a young woman is helping her grandmother clean out the attic before the house is sold in foreclosure. She finds a mysterious antique pocketwatch that belonged to her ancestor, Grandpa Willie, a Wild West goldminer. Somehow it magically transports her to the Wild West, where she is able to save him from being killed by a bandit, Black Jack, which leads to an increase in family fortune to the benefit of her grandmother.

The sequel picks up where the first left off. It’s the present, and the young woman notices that there are some strange things in her grandmother’s house. She realizes that in the new, altered past, Black Jack was able to break out of prison and this time not just her grandfather but additional people died. So it’s back to the past to try to rescue everyone.

Although the plot sets up nicely, and the granddaughter (whose name we never learn) visits interesting and appropriate locations like a jail, the sheriff’s office, a gold mine, a saloon, and so on, the story details just aren’t written very well. After several scenes of trying to catch up with a bandit, we’re then told the fight will be resolved if she can just spot the differences between two photos of the outlaw. Unlike, say, Steve the Sheriff, where the differences are clues to the story, here they’re arbitrary artist’s changes. One person even has 3 hands in one picture and 2 in the other. Find the differences, and everything is OK again. It makes the story, which is really the most creative part of the game, unsatisfying.

The hidden object scenes are acceptable but not exciting. There’s an attempt to make the objects suitable to the story, like fancy silverware in a diningroom, but a number of objects are inappropriate to the time period and strangely numerous deep sea items like a diving helmet and ship’s anchor appear in several scenes. Most objects are large and easy to find, and the hint system is generous. One aspect of gameplay, where moving clouds sometimes obscure an object, is visually interesting and adds a tiny bit of challenge, but most experienced hidden object Game players will zoom through these scenes in a few minutes at most.

The find the differences scenes that occur every few chapters are a bit more challenging but again not very interesting.

Then there are the picture tile mini-games. These are too difficult compared to the other activities. A very large-scale picture, usually a landscape, has been broken up into small tiles, 40 or more. At the bottom of the screen are a set of images that represent one tile each. You have to click on the places in the picture where the tiles would go. It’s like having a set of jigsaw pieces on one side and a completed picture on the other and being told to click on the spots in the puzzle each piece represents. It’s doable, but tedious.

The story is told in long journal entries in between chapters. You can skip these if you just want to get to the gameplay, but they’re interesting reading for those who like plots to motivate a game. Similarly the music is fun for those who like it, but easy to turn off. There’s no voice acting or audio cues.

We’re big fans of both hidden object Games and interesting settings, so we enjoyed Wild West Quest 2. You won’t find the richness of character or detail here that you do in a game like Westward III, but if you just want to wile away an hour or two with a simple hidden object game, this is a reasonable choice. Like old B movie Westerns, it all depends on how you set your expectations going in.