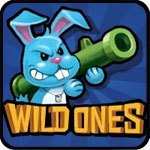 Wild Ones is a turn-based action strategy game in which cuddly animals are armed to the teeth and attempt to blow each other off the map. The goal here, like Worms, is to be the last man standing.

Gameplay in Wild Ones is all about power and trajectory. After you select your weapon you’ll point it in the direction you want it to go. Once you’ve settled on a target, holding down the left mouse button will increase the power behind your shot. The longer you hold the button the further your shot will travel. Each map is laid out in such a way that, depending on where you or your target are, you’re bound to encounter some really tricky shots. Learning the physics behind aiming and shooting is a trial and error affair, but once you’ve mastered it you’ll be amazed at some of the seemingly impossible shots you can pull off.

A Worms-style game lives and dies by two things: level design and weapon selection. Wild Ones excels at both. Each new map you unlock will feature new layouts with distinct advantages and disadvantages. What’s great is that these advantages and disadvantages usually allow for interesting uses of your weaponry. A map with a lot of platforms is great to navigate with your grappling gun, while one with holes where your opponents get stuck are perfectly opportune for a grenade toss.

Weapons here are big, powerful and fun. The default unit for causing mayhem is the rocket launcher, but as you progress through the levels you’ll quickly unlock everything from a beehive launcher to a gun that drills through the landscape. The game also offers a number of support weapons too, like the aforementioned grappling gun or the teleport ball that can instantly move you around the map. Every weapon in the game, like the maps, has its advantages and disadvantages depending on the situation. The game is incredibly well balanced and offers up a great deal of variety.

While the community around the game is still small compared to some of the mega-hits on Facebook, it’s also faithful and engaging. Since the battles take place in real time, having other people online to play with is essential to the game’s success. Thankfully this has never been a problem. In fact, players have gone so far as to use the chat window to organize teams while on the battlefield, as team-based combat is an element that isn’t natively in the game.

What’s surprising isn’t that a Worms-style game is on Facebook, but that it took this long to happen. With a gameplay concept built around the multiplayer experience, it was only a matter of time until someone clued in and brought this traditional social game to the internet’s leading social gaming platform. What is surprising is how good it is. Fans of the genre looking for a fantastic real-time multiplayer experience at the tips of their fingers need look no further.