Home / Reviews / Who Wants To Be A Millionaire on Facebook Review

Who Wants To Be A Millionaire on Facebook Review 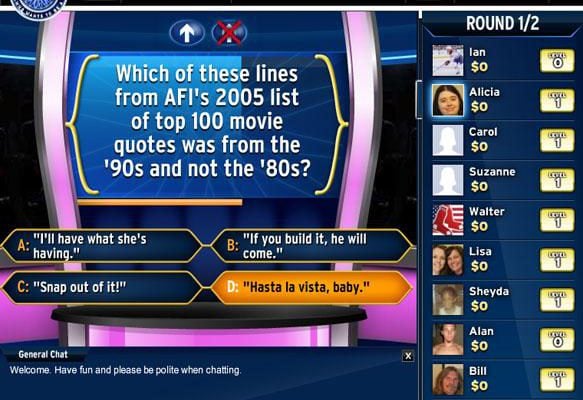 Who Wants To Be A Millionaire is a great social trivia game, but loses something in the translation to Facebook

Ludia is a developer with quite a track record of turning popular game and reality shows into enjoyable Facebook social games, having developed the excellent Facebook version of The Price is Right. Who Wants To Be A Millionaire is the company’s latest effort and it’s everything you could reasonably expect a social adaptation of the game to be. Ludia hasn’t dropped the ball, instead perfectly adapting the look and feel of the current syndicated version of the show into the Facebook version. Most of Who Wants To Be a Millionaire‘s problems come from basic limitations of the format rather than how it was adapted.

In Who Wants To Be A Millionaire, first round play begins with 10 contestants answering a series of 10 trivia questions. Correct answers are rewarded with money, while wrong answers receive no penalty. There’s a limited amount of time given each contestant to answer, and the difficulty levels and monetary values of each question are shuffled, just as they are in the current iteration of the syndicated Who Wants To Be A Millionaire. 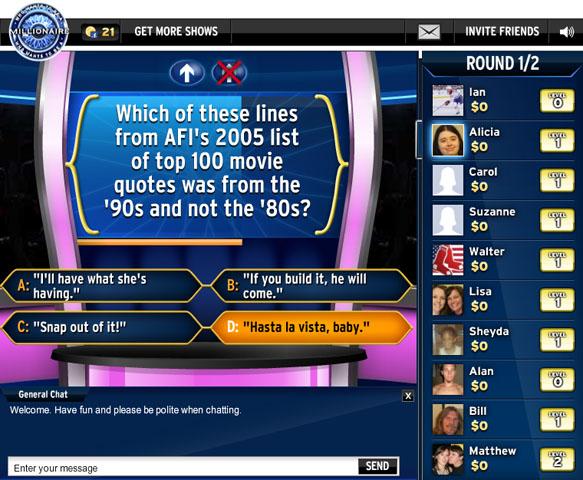 A multiplier is applied to the value of each question, based on how many people answered it incorrectly. If only three of the 10 competitors get a right answer, then the question is suddenly worth y times its initial monetary value. Players also get bonus money for answering first, with a bigger bonus earned based on how many competitors got a question right. If all 10 players answer a $10,000 question correctly, then whoever answered first will get $20,000. At the end of the first round, the top three contestants go to the second round, where they can attempt to earn $1 million virtual dollars.

In the second round, players are given four final, extra-hard questions to answer that are worth extremely high amounts of money: $100,000, $250,000, $500,000, and $1 million. Players who answer a question correctly are rewarded with money, but incorrect answers in this round cause you to lose money equal to the question’s value (down to a minimum of $25,000). A player can opt to walk away at any time in the second round, keeping all money earned in the first round. 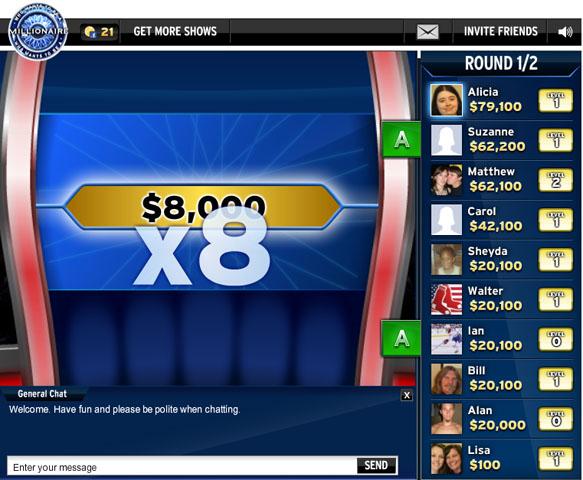 Players can use up to two Lifelines per round to do things like skip questions or get help answering second round questions (but not the $1 million dollar question). Your number of Lifelines per day is limited by how many friends you have that play the game with you. Playing the game without Lifelines is easy enough, but loses a bit of the flavor of the syndicated gameshow.

The game’s biggest problem is inherent in the format. Who Wants To Be A Millionaire is entertaining because of the drama and tension created as the game’s host interacts with competitors who are struggling to make tough decisions. There’s no real in-game counterpart to that, with the competition instead feeling more like a low-stakes guessing game. There are no in-game virtual goods to buy with your hard-won cash, after all, so you don’t really experience the feeling of becoming a virtual millionaire. Who Wants To Be A Millionaire is still a very entertaining social trivia game, but it feels like it should be more.