Whisper of a Rose Review 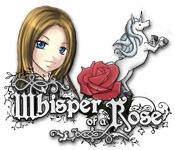 Credit where credit is due: Whisper of a Rose is nothing if not ambitious. Rose Portal Games’ first casual role-playing game is a deep, sprawling fantasy experience set in multiple worlds filled with visually diverse environments. Unfortunately, it also suffers game-ending glitches, stale dialogue, and questionable interface and game design decisions. Still, there’s a lot more good than bad in this atypical RPG.

Set 14 years in the future, the story picks up with Melrose, a teen girl abused by her parents at home and by her peers at school, pining for a better life—preferably one that resembles her dreams, in which she is a noble warrior princess in a fairytale world. Just when it seems her life could become no worse, she hears about a prototype machine that lets people live inside their dreams. She purloins it from the local museum and suddenly finds herself exploring her dreams—only they’re more like nightmares. Turns out the dream world she inhabits is being informed by her fears, not her desires, and now she has to fight to escape.

Things start slowly—perhaps too slowly. Much of the first hour of the game is interactive exposition; we simply move Melrose from one location to another and take on a couple of very simple side quests for strangers before finally moving into the dream world and getting into some very basic battles. And while the plot merits interest, the dialogue is two-dimensional and filled with clichés.

Worse, the first dream world dungeon we explore is one of the game’s most frustrating. It’s a mysterious starry firmament the borders of which are anything but clear. Continually bumping into invisible boundaries while using the arrow keys to navigate can be terribly aggravating. Clicking to move with a mouse doesn’t help much when you don’t necessarily know where to click.

Plus, I encountered a pair of progress arresting glitches in the first hour that left Melrose stuck and unable to move. In both cases I had no choice but to load my last saved game. (Suggestion: take advantage of the quick save feature often.)

However, once we get into the dream world proper—a huge and lush place filled with mountains, forests, and purely fantastical places where enormous pieces of candy come to life and flowers are as tall as houses—Whisper of a Rose begins to find its footing. Expansive fields of exploration are simple to navigate and filled with treasure, and ample hidden areas provide players who relentlessly search out a map’s every nook and cranny with plenty of rewards in the form of new equipment and rare supplies for crafting.

On the subject of crafting, it’s one of the game’s more satisfying features. As you quest you’ll find loads of rare but seemingly useless items—until, that is, you stumble upon a recipe that makes use of them to fabricate, say, a powerful, stat-enhancing set of earrings. It’s great motivation to keep on exploring those crannies.

Another gratifying feature—and the heart of the game’s combat system—is the skill tree. As the game progresses players earn points to unlock their choice of skills unique to each character. These skills are visually represented in the menu as a large web. Once purchased they can be upgraded further in terms of power, casting time, and the number of magic points required to initiate them. No two characters will ever develop in identical fashion.

Large, branching skill paths are common in big-budget console games but rarely seen in casual RPGs, and with good reason; they can be enormously complex and throw a game’s balance out of whack if implemented poorly. Happily, that’s not the case here. While the skills I chose had a significant impact on how I fared against certain enemy types, I never felt as though some skills debilitated my characters or that others made my party unstoppable. Rather, there are certain circumstances under which each skill performs well and poorly. The key is choosing skills that compliment your playing style and learning when to use them.

Battles, meanwhile, are action packed and often challenging. Though many field fights will have players simply tapping the enter button to launch attacks until their enemies are defeated, there are more dramatic battles when you really feel as though may lose. Some enemies require players to watch for signs of impending massive attacks so that they can have their characters time a proper defense, while others force us to reconsider tactics, equipment, and items we bring to battle. In fact, there are certain areas of the game where you will stumble into enemies you have no hope of defeating and which can kill your party with a single blow. Point being, players need to remain on their toes—which often isn’t the case in casual RPGs.

Sadly, for each thing Whisper of a Rose gets right there is usually also some small annoyance. The battles are fun, but the areas we explore are so large and maze-like that exploration can become tedious. And rather than just show players the loot they’ve earned after a battle, the game forces us to pick our winnings up off the ground and click through each item—a big time waster.

The retro, sprite-based graphics are strictly love-them-or-leave-them. Personally, I like how Rose Portal Games shunned convention and made everything a bit bigger than the norm for this genre. Rather than looking like blobs with giant faces drawn on, our characters actually have torsos and long limbs that extend from their bodies. What’s more, trees and houses are more or less to scale, and can fill the entire screen. Of course, others might see the graphics as striving for and failing to achieve a sense of realism that games of this ilk simply cannot muster. It will be a matter of perspective.

There should be no debate over the music, though. The score is just plain great. All too often casual RPGs suffer from obnoxious and repetitious synth guitars and simple techno, as if the developers were desperate for some way to instil an artificial sense of urgency by means of sound. By contrast, this soundtrack is filled with subtly complex arrangements and memorable melodies. It’s piano and strings are still noticeably synthetic, but in an embracing way that fans of old-school role-playing games will likely appreciate.

Whisper of a Rose is flawed in plenty of ways, but none of its issues are deal breakers. Moreover, it absolutely nails much of what it gets right. The scope and diversity of its world will make many other RPG makers envious, and there is surprising depth and complexity in its design. It won’t win any RPG-of-the-year awards, but those who give it a chance will likely find it quite memorable. If Rose Portal Games learns from its mistakes, it could have a very bright future as a casual/retro RPG studio.