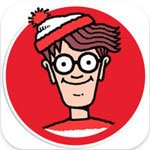 Hidden object games were all the rage in 2009, but does anybody else remember when they were all the rage back in 1987? Of course, back then finding hidden object didn't require a mouse or keyboard. All you needed was some keen intuition, an extra large 32 page book, and a good friend named Waldo. Now everyone's favourite bespectacled traveller Waldo is back, and he's moving his journey from paper to pocket in the new iPhone game Where's Waldo: The Fantastic Journey.

Launched in 1987, the Waldo series of books (Wally in the UK) was a popular children's series that featured massive two-page spreads of crowd scenes where certain characters and objects were hiding. The main objective was to find Waldo, a red and white-suited fellow who would travel from page to page blending into different scenes. For most of us Waldo would be our first experience in finding hidden objects, and an obvious forefather to the hidden object genre that has become such a major player in the casual games industry over the years.

What made the books challenging – the massive number of people on a given page, the hectic madness going on in each scene, the use of red and white stripes in any number of objects meant to serve as red herrings – have all returned with a vengeance here. Where's Waldo: The Fantastic Journey captures that feeling of massive environments and nail-biting difficulty that I remember from my childhood, but it adds in a few elements that make the game artificially harder than it needs to be.

Here's how things break down: in every level you'll be tasked with finding a few characters from the Waldo universe. Once you've done this the real challenge kicks off, and you'll need to find a variety of people or objects that match a few random images at the bottom of the screen. Rather than navigating the full image you'll be limited to about 25% of the whole picture. The 25% you'll be viewing will have the specific object you're hunting for in it, but it will limit you from stumbling across the other objects on your list while you're exploring the environment.

Stumbling across objects while exploring is not only a tactic that many of us use when playing hidden object games, but it's downright essential given the ridiculously high standards you'll need to meet in order to proceed through this game.

Each level features a timer that takes the form of a five star score. The longer you take the fewer stars you'll earn. As you find objects the meter gets a slight refill, but for the most part the meter counts down far too quickly to be considered fair by any standards. What's worse is that you'll need to keep your meter above three stars if you want to unlock the next level. This means that even if you find all the objects, you don't necessarily get to go to advance through the game. There's a hint system in place as well, but the hints are incredibly limited and far too easy to blow through before you finish the first few stages.

Where's Waldo: The Fantastic Journey is an incredibly challenging hidden object game that scratches our nostalgia itch perfectly, but a part of what challenges us really taints the experience. Some of this challenge is a good thing, retaining the spirit of the original books without losing a thing that made them so great. Some of this challenge is a bad thing, resulting from poor choices in game design that make things more frustrating than originally intended. As a child of the 80's with fond memories of reading Where's Waldo in my school library, Where's Waldo: The Fantastic Journey did everything it needed to bring me back to a simpler time. As a gamer, poor design choices robbed me of something that had the potential to be a brilliant experience.