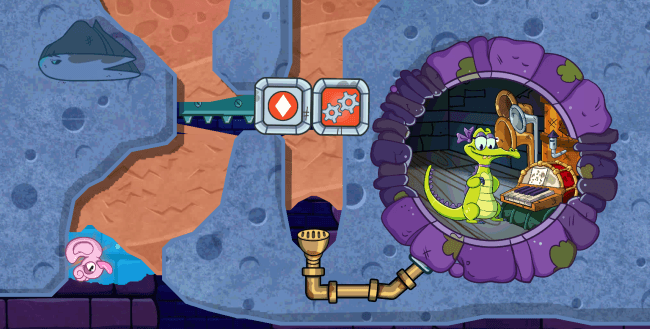 Ran out the hot water

There’s always an alligator, there’s always water, and there’s always dirt separating the two.  The infinite loop of Swampy’s bath time in Where’s My Water? was charming and challenging, generously packed with levels and updates that made its 99 cent price tag an absolute steal.  Its first non-spin-off, direct sequel, Where’s My Water? 2, has slashed that initial price down to nothing, but actually costs much more: players’ time, trust, and patience have been sold down the freemium river.

The good news: if you like any of Disney’s Where’s My games, there’s plenty more to love here.  Where’s My Water? 2 plays out like all of its predecessors: swipe trenches in dirt to direct water to its destination.  Along the way, you’ll need to activate switches, avoid acid, collect duckies, and complete many other puzzle-based maneuvers.  Swampy is still our primary water-target, waiting patiently for his bath to runneth over, but both Cranky and Allie have been upgraded from bonus level pack characters to main game integrations.  Cranky’s ducks and goal require acid instead of water, and Allie is still in need of steam to power her pipe organ.  Their levels now appear alongside Swampy’s, providing a refreshing change of pace for players who get bored with alligator monogamy.

While playing with Cranky and Allie will be a new experience to players who dropped Where’s My Water? before 2012, the basic puzzles in Where’s My Water? 2 will not be.  Very few changes have been introduced, and many levels feel more redundant than nostalgic.  There are pipes and switches, acid and quick-growing weeds, nozzles and movable platforms.  Despite the introduction of an overworld map and “locations” like the Soap Factory, every stage still takes place underground.  When playing the first iteration of a level, veteran players will rarely encounter something new.

Thankfully, every level features multiple iterations, known as Challenges.  Completing the basic version of a level will unlock the next one on the map—allowing for forward progress—as well as the first Challenge available in the finished level.  Challenges play out like a standard level, but take place on the same stage and contain special rules.  For instance, on an “Avoid It” stage variation, you must get the water/acid/steam to its destination without collecting any duckies.  On “Driller” stages, you can dig through rock but are not allowed to use switches or pipes.  And on “Melody” stages, you must collect five music notes in a specified order instead of the three rubber ducks.  There are an impressive number of other Challenge types, and all are a fantastic addition to Where’s My Water? 2; they provide fun variations on each stage as well as unique mechanical changes to the series as a whole.

The other noteworthy stage change is the fact that longer, vertical puzzles have been replaced by “Duck Rush” levels.  Duck Rush levels take place over an expansive, continuously scrolling stage that requires both forethought and quick reaction time.  They each contain six ducks instead of three, and the only goal—besides collecting ducks—is to have at least one drop of liquid remaining by the stage’s end.  While Duck Rush stages feel somewhat out of place in the consistent puzzle layout of the rest of the game, they do provide an increased challenge and yet another variation to keep things fresh.

To round out the potential difficulty of these new stages, Where’s My Water? 2 has also introduced a hint system and duckie-related power-ups.  Both hints and power-ups are awarded at certain parts of the map, or can be bought in bundles.  While expert players will likely find them unnecessary, both bonuses are extremely well-done: the hint system draws out suggested paths for strictly completing a level—not collecting all its ducks—and the power-ups make it much easier to wet the beaks of hard-to-reach fowl in different scenarios.

With its new mechanics, bonuses, and characters, Where’s My Water? 2 is technically a worthwhile addition to Disney’s dirt-gouging family of games.  That is, when you can actually play it.  The most critical, and critically disappointing, addition to the game is a slow-charge energy meter that is required to play.  Upon first starting, you might not notice the meter—it’s never mentioned or explained in any fashion, and only rears its ugly head when you run out of energy.  That probably won’t happen for the first few levels, when you are tri-ducking without retries and unlocking energy-refilling sections of the map with ease.  But trust me: it will happen, and then it will happen constantly. 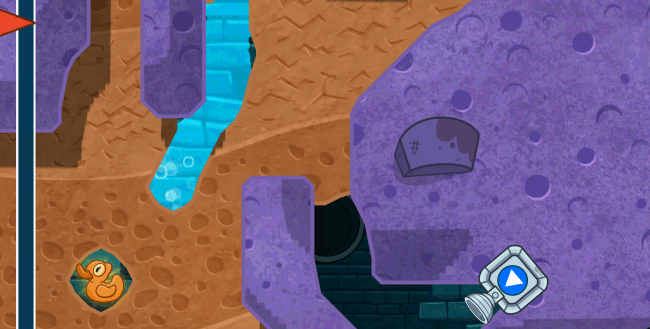 Or, you can wait 90 minutes to play nine stages.  Or you can pay 99 cents to recharge all nine jolts immediately and another 99 cents every time it runs out!  Or—even better—you can spam your Facebook friends and get a free jolt.  Or—and I can’t believe this is a real thing—you can pay $16.99 to slightly expand your energy meter so it holds more jolts.  Not get rid of it entirely, of course; just “play more often.”

In any of the Where’s My titles, where even a challenging stage will take less than a minute to complete, this means your ratio of playtime to wait time is obscene.  This egregious energy meter is stacked on top of other ways Where’s My Water? 2 wants to take your money: the hint system, duck power-ups, and beach stages all cost money (or Facebook spam) to access beyond the few handed out in-game.  While the hints and power-ups are extremely useful and reasonable as in-app purchases, the energy meter and beach stages—which are erroneously listed as part of the “all free” launch puzzles—are a slap in the face of Swampy’s long-time supporters. 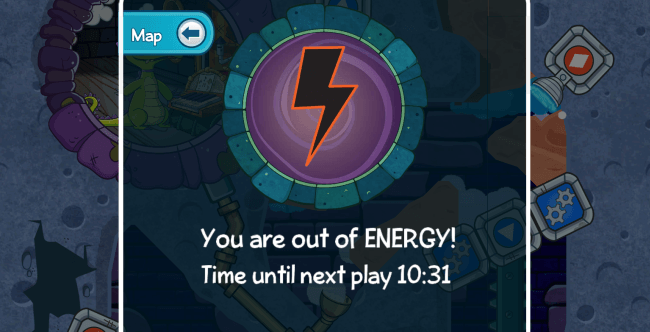 Disney has made a number of admirable changes to Where’s My Water? 2, but these are overshadowed by the money-grubbing nature of its energy meter and pay-to-play focus.  What was once a relaxing, refreshing change of pace in the App Store is now just another poorly implemented freemium model.  It will take a lot of baths to get this stench off Swampy.