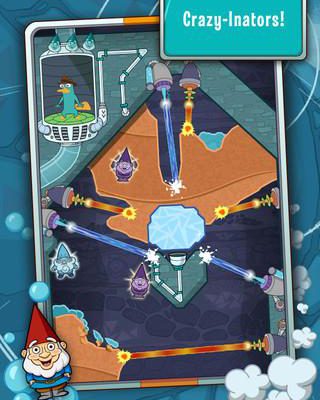 So good, you’ll be (platy)pining for more!

It takes a real optimist to approach any sort of media tie-in game with no hesitation. While we’ve been treated to plenty of good ones in the past, the lazy, uninspired ones outweigh them quite a bit. As such, I wasn’t completely sure what to expect out of Where’s My Perry?, a reworking of the original Where’s My Water? But I went into it with an open mind, and ended up completely happy with how much was added and changed.

Many of these changes are immediately noticeable. The rubber duckies you collected in Where’s My Water?, for example, are now gnomes. There are also brief cutscenes featuring the voice actors from the show, not to mention various audio quips in-between levels. It turns out not everyone is rooting for Perry the platypus’ success.

I don’t want to downplay the many referential nods the game makes to the popular Disney show Phineas and Ferb, and I especially don’t want to make it sound like I’m not enthused by the ability to play as a fedora-wearing platypi. Both of these things are crucial to the experience, and will likely encourage most people to buy Where’s My Perry? in the first place. But I can’t help but be more enchanted by the game’s introduction of new gameplay mechanics. First and foremost is the addition of “Crazy-inators,” which have the ability to change water to steam and ice. On the flipside, they can also turn ice into water. These new mechanics are introduced one-by-one over the course of the game’s 80 levels, and they lead to a lot of puzzles that feel wildly different from Where’s My Water?

More deviation from the original can be found in the game’s collectible gnomes. They’re sprawled throughout levels in the same way, but the circumstances in which you gather them differ at times. For example, some gnomes can’t be collected by touching them with water. Instead, you must shroud them in steamy goodness. There was probably a less uncomfortable way I could have said that, but I suppose we’ll just have to deal. 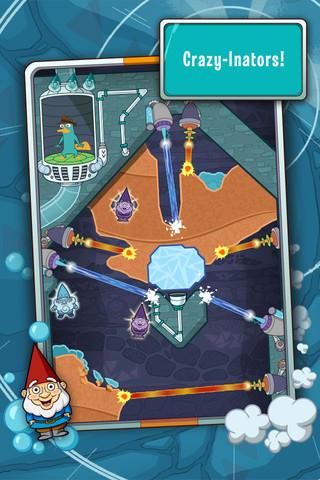 On the subject of dealing, one of the Crazy-inators will turn water into a useless heap of confetti. It’s eye candy, to be sure, but not exactly conducive to finishing the level. And don’t even get me started on how jealous I am. There’s no way I wouldn’t be the life of the party if I had the ability to convert water into confetti.

The only issue I really had with the game was the same one I had with Where’s My Water? – it’s very hard to make precise paths in the dirt. I imagine the situation isn’t so bad on the iPad, but some of the later levels require a precision that isn’t always easy to pull off on the iPhone’s small screen. I always managed to get by after a few quick retries, but it was frustrating to know what needed to be done, only to find myself struggling to actually make it happen.

Starting with 80 levels (and the promise of more to come), Where’s My Perry? is a triumph in every sense of the word. It tactfully weaves the humor and appeal of the show into the Where’s My Water? formula, all the while providing content that won’t have fans of the first game crying copycat. Developers tasked with creating tie-in games, take note: This is how it’s done.