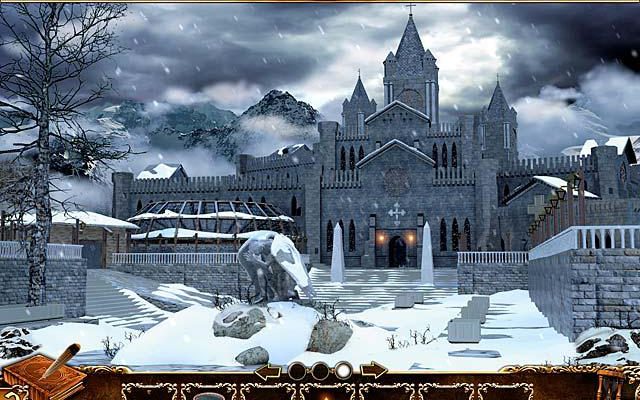 Why do they do it to us? Why do developers tantalize us with cool-sounding game ideas and then fail miserably to realize them? Where Angels Cry, the new hidden object game by Cateia Games, has the potential to be a dark religious mystery along the lines of Umberto Eco’s incredible novel, The Name of the Rose. Instead, it’s an ill-conceived, shabbily constructed narrative, weakly propped up by a collection of unattractive graphics and predictable puzzles.

Where Angels Cry starts with an interesting premise, and I admit to being excited during the intro. The game starts in the Middles Ages (1286 to be precise) in Rome. You’re a monk in this scenario, and in the opening cinematic you’re sent to a monastery in the Alps to investigate the disappearance of another monk called Brother John. Your first priority is to discover the fate of Brother John; your second is to debunk a miraculous statue that’s reported to shed tears of blood. Set on unraveling these mysteries, you gather your few belongings and turn your horse toward a remote monastery nestled deep in the snow-capped Alps.

At first I loved all this. I loved the mysterious intro and the fact that finally, I was getting to play something other than a reporter or a detective (okay, the monk’s basically a detective, but my hope was that the context would alter his motives and his methods). Although the graphics in the intro weren’t mind-blowing, they were moody enough and featured full animation. Imagine my disappointment when five minutes in, I realized I’d been the victim of a total bait and switch. 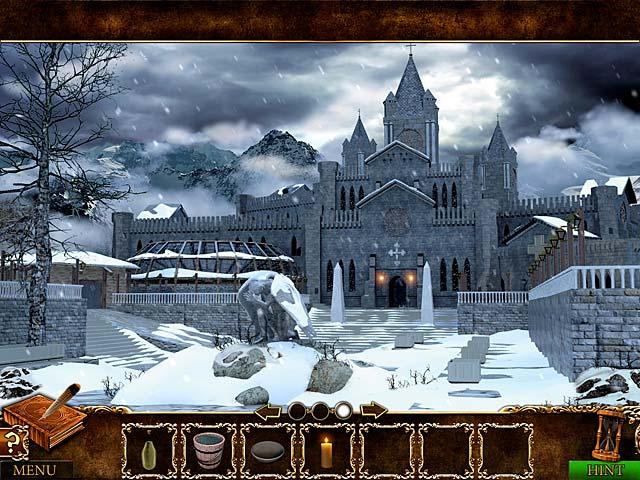 Great graphics aren’t an absolute requirement for a great game, but it sure doesn’t hurt. Hidden object games in particular are known for them (well, the good ones are), so I couldn’t help but be let down once I got a better look at Where Angels Cry. Put bluntly, it’s an ugly game. I don’t know if it’s due to a lack of time and money or if the art team simply doesn’t have the skills to do better, but visually speaking, it’s like lunch in a hospital cafeteria: a veritable buffet of bland. Brown, gray and beige dominate in some of the feeblest 3D work I’ve seen in ages. Textures are boring, modeling is simplistic; there’s just nothing for your eyes to grab onto. And what’s hilarious about this is that at game start, you’re asked if you’d like to turn on HD graphics. Kind of brings to mind an old adage about putting lipstick on a pig.

Anyway, the environments aren’t the only aesthetical offenders. The game’s characters are uninspired and since they don’t animate at all, they look like creepy shop window mannequins. The same goes for any horse or cow you might run into. It’s utterly bizarre to be shoeing and grooming a horse, only to have it stand there as if it had just undergone a taxidermy. The biggest issue with graphics, though, is the shameful overuse of 3D models. Within a single scene you’ll see multiples of the same vase or cup or barrel, and this doesn’t just make for dull scenes; it sets you up for lots of laborious pixel-hunting.

Bland, repetitive models mean the game’s scenes aren’t alive and with minimal visual cues to guide you through them, your only recourse is to drag the mouse pointer over every inch of the screen. Exacerbating the problem, the game’s objectives—though clearly defined in your journal—often expect you to complete many seemingly unrelated actions before achieving them. I admit without shame to frequently using the Hint button rather than subjecting my wrist to the painful “fine-tooth-comb” technique, and to once or twice using the Skip button rather than bothering to solve shop-worn selections from what must be a very thick book entitled Most-Used Puzzles. The only interesting bit of gameplay for my money, is a duel enacted via match-three mini-game that plays something like a sluggish, simplified version of Puzzle Quest. 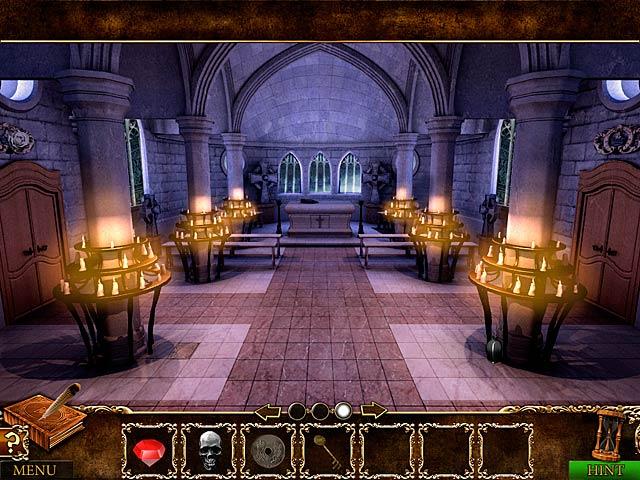 In addition to the duel, the other somewhat likable element of the game is the music. On occasion it reminds me of the more dramatic themes from the old Gabriel Knight adventure games; at other times, it veers into Harry Potter territory. The voice acting is also pretty good, except for one or two absurdly over-the-top characters and one lad that speaks, inexplicably, with an Irish accent (his mother is Italian). Unfortunately, while the voice performances aren’t that bad, the writing definitely is. The dialogue is silly, wooden, and peppered with words like “Fie!”, “Alack!”, “Hark!” and “Sooth” – I guess in an attempt to make things sound medieval. All it does, though, is make you feel as if you’ve been stuck for hours at a particularly bad Renaissance Faire.

The game’s final issues are its attention to detail (or lack thereof), and its clumsy, confusing ending. Throughout the game, dialogue subtitles exhibit typos, misspellings and grammatical errors. Further, chapter intros flash on and off the screen far too quickly, and this ends up looking more like a glitch than something intended. After suffering from ugly art, dull gameplay and goofy writing, Where Angels Cry is already in bad shape, but then its badly-handled ending comes along and finishes it off. Early on you’re told there’s an Evil Agenda that you must prevent. Then, in the last scene, you do exactly what you’ve been told to prevent, and for no discernible reason. There’s really no explanation of why you do it, or what the consequences really are, and then voila—the game ends. This not being a Collector’s Edition, you can’t even count on a bonus chapter to straighten things out.

After losing three hours of my life I’ll never get back, I’ve decided there should be a list of key adjectives that must be used when recommending Where Angels Cry to other gamers. Among these are: “dull, uninspired, and derivative,” as well as “arduous, bland, and aggressively unattractive.” Yeah that’s harsh, but outside of an intro cinematic and two minutes of sort-of-interesting match-three gameplay, entirely accurate. If you still don’t believe me and insist on trying the game, note that once you’re finished, although you might not know where angels cry, you’ll definitely know when: when they play this game.