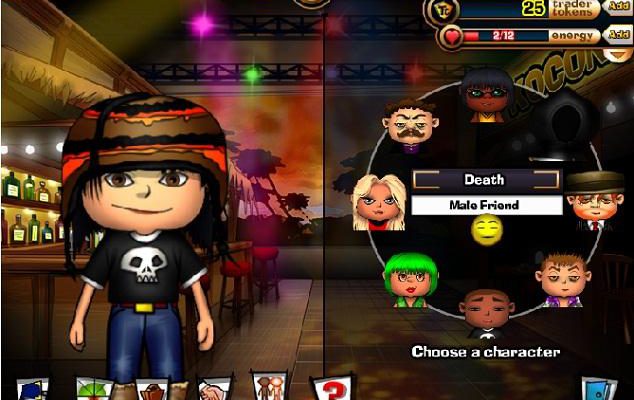 Wheelers and Dealers is the rare Facebook game that offers a lot more depth and engagement than you might expect. At first blush this is a game that looks very much like another text RPG trying to liven up the same old menu-clicking gameplay with lots of artwork. While there is a lot of menu-clicking in Wheelers and Dealers’ gameplay, it’s vastly more interesting than your average Facebook text RPG. Wheelers and Dealers is basically an economics sim where you attempt to sell small quantities of goods to a variety of urban dealers. You can start selling simple swap meet items like cheap clothing and work your way up to selling all sorts of high-end luxury goods (not all of which are, strictly speaking, legal). 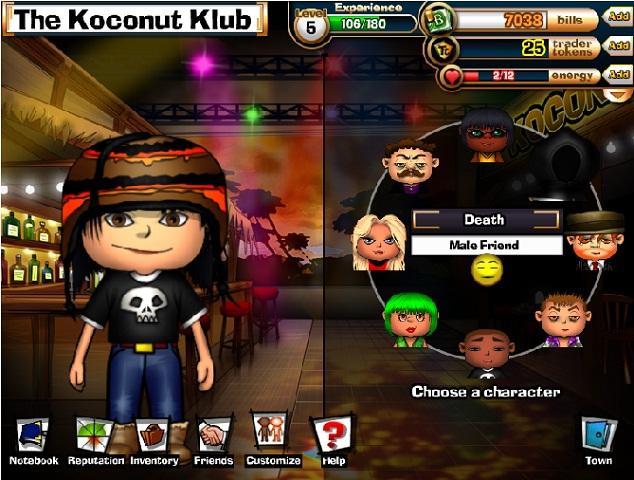 Wheelers and Dealers starts you off with a little bit of money and a small amount of the Red Cent Isles, Shady Acres, available to explore. Each area of Shady Acres plays host to particular NPCs at particular times of day that you can interact with in a variety of ways. Usually you’ll be trying to complete the game’s missions, which are plentiful, or trying to complete tasks given to you by Dealers (which let you make money very quickly). The only limit on your buying and selling is energy, which you consume whenever you talk to people. 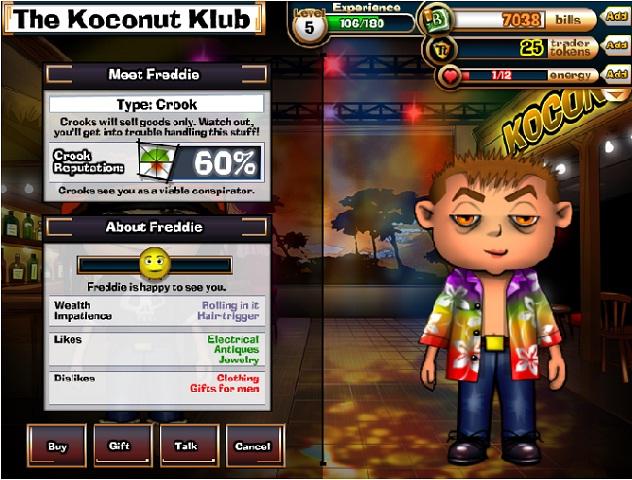 What makes Wheelers and Dealers interesting is the NPCs. They all have very distinct personality quirks that are typically reflected in what they sell, what they like to buy, and where they hang out. Succeeding at the game basically means slowly learning how to deal with the various NPCs. Sometimes you need to just chat with NPCs to improve their mood and different characters will respond to jokes and flattery very differently. Each NPC is also part of a faction that you can build (or damage) your standing with. Generally the more a faction likes you, the easier its NPCs are to deal with, but some factions like Entrepreneurs and Crooks build up affection very slowly.

There’s a depth and texture to Wheelers and Dealers that simply isn’t present in most Facebook RPGs. Missions are more satisfying to finish and you put more thought into how you’ll obtain the goods that such-and-such character wants. The game isn’t flawless as of this writing, of course. The servers are still a little unstable, which can lead to lost progress. The game’s visuals are extremely simple and a bit rough around the edges, with some NPC designs a little hard to tell apart. You also end up doing a lot of random clicking around when you’re looking for a particular item or sometimes even for particular NPCs. 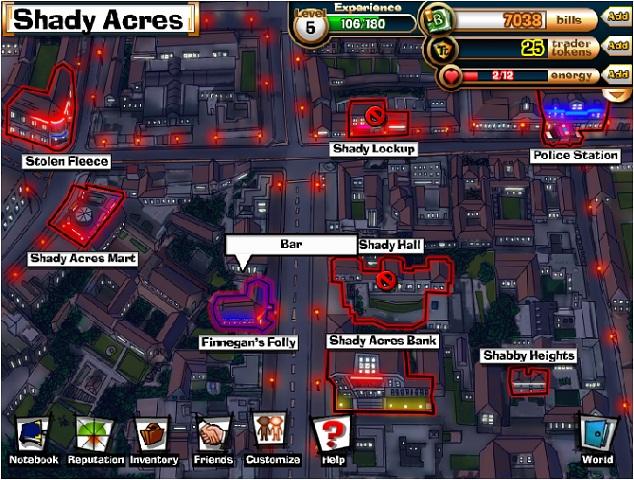 Wheelers and Dealers still has a lot of potential as a game. While it’s not flashy, it’s just very solid and easy to play in the way that a good sim should be. Missions are handed out on timers, so you never really lack for things to do for very long, even if it’s just making money by fetching things for Dealers. The game can get a bit repetitive after awhile, but it’s at least a game that you’ll feel like putting a lot of time into. Most Facebook games don’t think far beyond the ten-minute distraction.

Poker Night at the Inventory Review