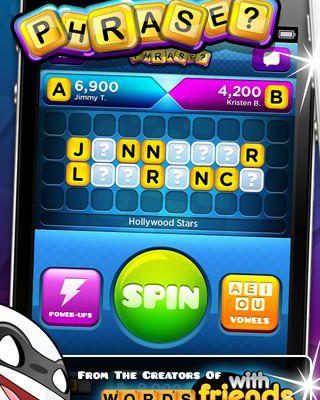 What’s The Phrase isn’t a bad Wheel of Fortune clone, but it’s still exactly that: a clone.

It’s been about a year since Zynga bought OMGPop and Draw Something for $180 million, which means it’s also been about a year since Draw Something‘s popularity deflated like a cheap balloon and left Zynga holding a rubbery corpse. 2012 proved to be a year of major reflection and restructuring for the social gaming giant, and its latest mobile title, What’s The Phrase, presents a good opportunity for the company to demonstrate that it’s learned some lessons. So are we witnessing the dawn of a sadder, wiser Zynga? Eh, well, maybe.

What’s The Phrase is a social word game that plays a great deal like Wheel of Fortune. Each round begins with a blank game board, and you and your opponent must take turns choosing letters until it’s filled in—or until one of you can guess at the entire phrase. 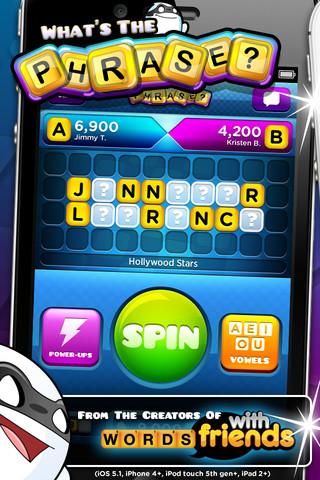 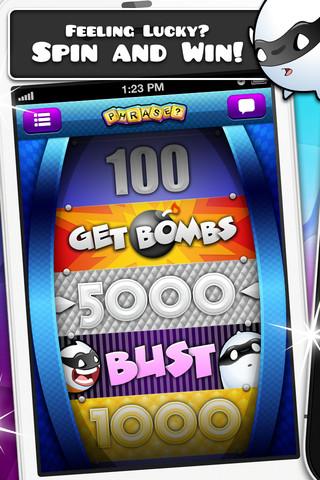 Scoring is handled via a spinning number wheel. The number you roll is what you’re awarded if you choose a letter that appears in the mystery phrase. Of course, there are plenty of pitfalls: If you make an unlucky spin, you can lose a turn, or go entirely bankrupt.

You earn coins as you play What’s The Phrase. The coins go towards buying vowels, power-ups that can give you an edge over your opponent, or new categories. The selection of categories available in What’s The Phrase is one of a few features that separates Zynga’s game from Wheel of Fortune. Whereas Wheel sticks to topics that are grandma-approved, the categories in What’s The Phrase are a little more hip, as the kids say. Granted, the default phrases are familiar territory (“Food,” “Movies,” etc), but when you collect enough coins you can unlock “Video Games,” “Internet Memes,” or (sigh) “Hot Chicks” and “Hot Dudes.”

What’s The Phrase is decent fun. You can sign in with an email or your Facebook account. You can play with friends or go toe-to-toe with strangers. An option to play the computer would be nice; sometimes all you want is a steadily-paced game, and it can take a while for your opponent to pick up his or her turn. Priorities, people! 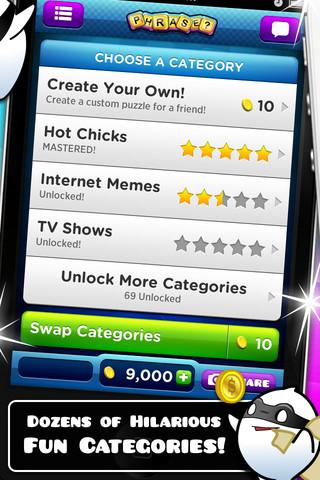 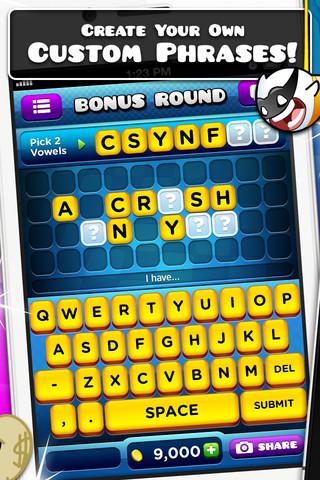 Second, What’s The Phrase plays too closely to Wheel of Fortune, minus its “edgy” categories. It’s no longer 2009, when clones were acceptable because the App Store was a seedling and iOS game development was quite new. In fact, Words With Friends still changes up Scrabble‘s rules more than What’s The Phrase alters Wheel of Fortune‘s formula. No one really expects Zynga to re-invent the Wheel, but the company should do more than update a few categories, remove Pat Sajak, and shoehorn in a mascot that looks like a bit of male genetic material wearing a robber’s mask.

As far as a Wheel of Fortune clone goes, however, there’s little wrong with how What’s The Phrase actually plays. The question is whether you’ll want to, or if you’ll just opt for the real deal by Sony, which is also on the App Store.