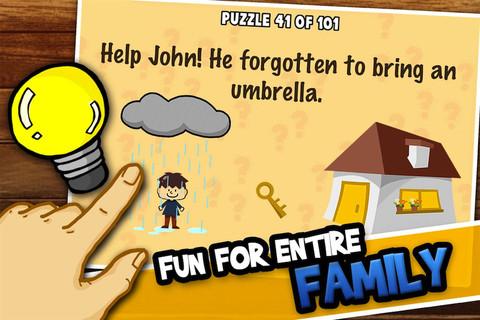 If your IQ is anywhere above 3, you’ll walk away before long.

IQ tests are self-indulgent, pointless, and are a poor means of measuring something as complex as human intelligence. Yet we’re drawn to those tests over and over. There’s something comforting about a string of numbers that essentially tells us, “Yeah, you’re smart, dogg. You locked your keys in the car this morning, but you’re as sharp as a Ginsu.” Maybe that’s why What’s My IQ? for iOS immediately draws in your attention. What you’ll find, though, is a series of vague trick questions that don’t measure any kind of intelligence, and aren’t always fun to play with.

What’s My IQ? gives you a series of questions that appear to have an easy answer at first glance, but actually require you to really think about what you’re really being asked. For example, early in the game you’re told to “select the biggest number” out of four. While you may be inclined to tap the number with the highest value, you’re actually supposed to tap the number that is physically larger than the others. Oh, game. You crazy.

This onehas a lot in common with The Moron Test, another popular fake IQ “measurement” app. You continue to answer questions to the best of your ability, and if you deliver five wrong answers, you’re forced back to the last checkpoint. You have a certain number of “cheats” that offer hints when you’re really stuck, and given how vague some of the questions are in What’s My IQ?, you can expect to burn through those cheats in record time.

What’s My IQ? is especially frustrating when you do have the right answer, but the game refuses to register it for some reason. This happens often when the answer goes beyond a simple multiple-choice tap. In one instance, you’re asked to correct the direction of two “up” and “down” arrows that are pointing left and right. You need to physically turn your iDevice upright, but if your solution doesn’t register immediately, you’re naturally going to think that you have the wrong answer. And when you wind up spending precious cheats to see the puzzle’s answer—well, just make sure there aren’t any children around to witness the words that come flying out of your mouth. 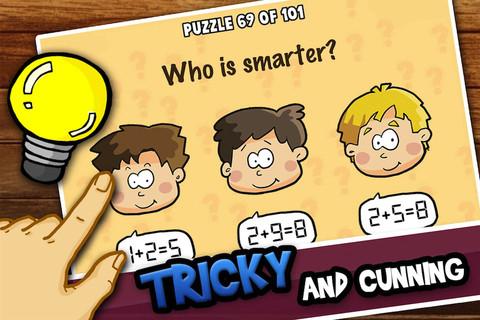 The cheat system is especially crooked because you’re expected to pay for more through an in-app purchase. Also, paying to cheat at any kind of intelligence test—no matter how weird or how unorthodox—kind of feels slimy.

What’s My IQ? admittedly looks good. The game’s anime mascots all wear a look of perpetual low-key terror that will make you recall long classroom hours spent on your worst subject. But while What’s My IQ? may get a smile or two out of you, the appeal doesn’t last long—and neither do your cheats.