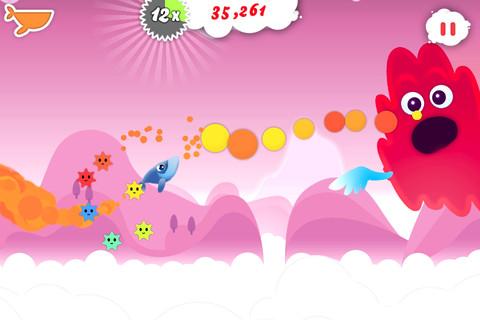 Whale Trail is so sweet that it makes my teeth hurt

Endless survival games are a dime a dozen on the iPhone nowadays, but when a developer gets one right, it can be magic. Just look at games like Jetpack Joyride or Tiny Wings to see what I mean. Whale Trail is the latest title to offer a similarly sublime survival experience, and it seems to do so with its tongue firmly planted in its cheek.

Players will guide Willow the Whale through the sky by touching the screen to make her swoop upwards. The whale moves endlessly to the left, and if you fail to help her swoop, her weight will begin to pull her down through the clouds. You’ll want to steer her towards the endless stream of colored dots that appear on the screen, as these provide the fuel she’ll need for the rainbow that… well, sort of poops out of her butt. If she runs out of rainbow fuel, she’ll drop out of the sky and into the clutches of the evil Baron von Barry, bringing the game to an end.

The challenge comes from making sure Willow keeps fuelled up. Not only does she spend fuel simply by flying, but bumping into an angry cloud will zap up some of her energy reserves too. Other little touches, like the ability to do fly in loops, getting height bursts from pinwheels, or collecting stars to go into “frenzy mode,” help to make sure there’s always something going on in the game to keep you striving for a new high score.

While the gameplay is tight, where Whale Trail really shines is in its presentation. To call this game sweet would be an understatement. Whale Trail is so pumped full of saccharine goodness that you’ll need a dentist’s appointment after playing it. Five minutes with Whale Trail is like eating two bags of Halloween candy for dinner, followed by triple layered cheesecake for dessert. Do you get it? The game is sweet. 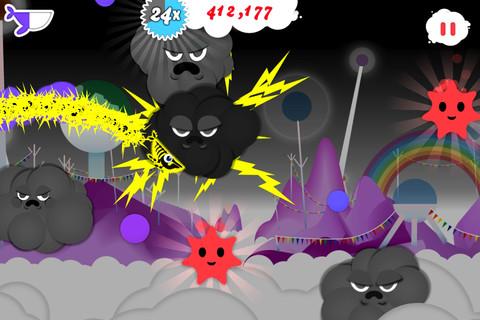 Between the rainbow-powered sky whale, the anthropomorphic hills and clouds, and the Seussian environments, it looks like a child’s picture book exploded all over the App Store. Even more charming than the visuals, though, is the soundtrack. The game’s theme song, written and performed by Gruff Rhys, is worth the price of admission alone. It sounds like something from The Beatles kids-friendly psychedelic era, with a touch of 90’s Britpop, all baked inside a strawberry cupcake. In fact even if you don’t download Whale Trail, you should still check out the song. Thankfully they’ve put together a full music video for it, which you can check out here.

Simple to play, utterly charming, and completely addictive, Whale Trail has all the makings of a great mobile game. The whole presentation almost seems to poke fun at the cuteness of mobile gaming mascots, but it does so in a completely friendly and kind-hearted way. Fans of endless high score drives, consider yourself warned: it’s time to ride the rainbow.