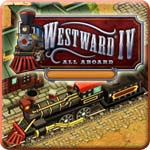 It’s a shame that the Wild West isn’t a more popular setting in video games. If Hollywood and Louis L’Amor are to be believed, this was the era when cowboys had the same sense of honor as Knights of the Round Table, gunfights were used to settle disputes, and gorgeous steam trains were the way to get around. It was a period of romance and adventure, when the nation was still young and the possibilities seemed endless. Thankfully, the Westward series of games have done the setting proud, and the newly-released Westward IV: All Aboard continues the tradition.

Players take on the role of one of the siblings Turner: Anne and Henry are called home by their mother to help revitalize the family railroad and then figure out why their father has inexplicably vanished. As you expand the railroad across a progressive map through neighbouring towns, you’ll have to protect the family business from no-good bandits, rescue kidnapped citizens, and build your town up from a broken-down shanty into a thriving community.

Westward IV is an adventure/strategy game that has players using a single character to repair and build structures, as well as fight off bandits, and recruit citizens to work for them. It’s a strange play mechanic if you’re unfamiliar with the Westward series; one that takes a little getting used to, but once you get the hang of things, this style is certainly intriguing.

The story is actually rather interesting and engaging, once you manage to get into it. The Turner family is a quirky bunch, but they’re also extremely likable. It takes a little while for the characters’ personality to really become noticeable, but you’ll be surprised at how invested you become in Anne and Henry’s tandem quests.

This is the game’s main strength: it has a charm that slowly creeps up on players and manages to take them by surprise.  This is accomplished by a combination of the game’s graphics, music, and story. The world that the game presents is the Wild West that we grew up believing in while we were children: it’s bright and colourful, full of friendly characters, and when the bad guys are quickly dispatched once they show up.  Essentially, Westward IV taps into the nostalgia we have for the fantasy we used to believe in.

The downside, though, is that Westward IV takes its sweet time to hook players. During its first hour, frankly, the first few missions are extremely slow-paced and boring. After this point, though, the pace started to pick up because the option to buy new building blueprints became available, which suddenly made things more interesting in the game. When you have a number of different buildings in your town, as well as enough citizens to staff such establishments, there’s plenty to keep players engaged with what needs to be done; early on, though, you’ll find yourself sitting around without much to do while you wait for either Anne or Henry to accomplish whatever task they’re working on. In the meantime, the repetitive speech clips start to get a little old, and it’s rather irritating that there isn’t a way to increase the game’s speed during these early sections.

Aside from a slow start and some minor design issues, Westward IV: All Aboard is a great strategy adventure that is a lot of fun, provided you can slog through the first hour or so of play. If you’re able to do this, you’re in for what is one of the most charming strategy games to come along in a while, and will find yourself madly in love with soon afterwards.