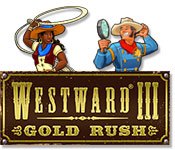 Northern California may not be in the throes of any present gold rushes, but circa the mid-1800s, nugget fever was in full swing. It’s a state of mind cheerfully captured in Westward III, a satisfying hybrid of real-time strategy game and life simulator which sends three all-new pioneers scurrying off to tame the wild frontier. A welcome, if predictable, step forward for the franchise, it quickly provides ample reason for series vets and newcomers alike to hop back in the saddle and hit the trail.

Each scenario, housed on a single sizable map, is subdivided into quests consisting of single or multiple tasks that must be completed, e.g. dynamiting your way through mountain passes or locating lost supplies. But to accomplish these goals, you’ll first have to partake of typical real-time strategy challenges, e.g. collecting resources such as food, water, wood and gold; constructing wells, farms, granaries, saloons and other buildings; exploring remote locales; and battling it out with bandits, wolves and wild animals.

Thankfully, a comprehensive tutorial walks you through the basics of play, from movement to lassoing (selecting) multiple characters and acquiring new structures, luxuries and upgrades. As such, you’ll learn to walk before running off to trade for supplies, forage for food and expand from a one-man show to thriving staff of deputies and craftsmen.

A good thing that, as the action revolves around establishing and maintaining fragile ecosystems and economies, all while balancing the need to expand holdings and accomplish set, overarching objectives. So while your hero may have the personal goal of reconnecting with specific companions or investigating the mystery of a trading post that’s suddenly gone quiet, completing it requires thinking several steps ahead.

For example: Let’s say some ornery varmints have holed up downstream, blocking the pathway forward. To clear them out, you may have to first scavenge for spare goods or fell the odd deer or rabbit to build up enough stocks to comfortably supply the local populace with chow and lodging. Once a happy workforce is available, you can then erect a lumber mill and have townsfolk fell trees until you’ve got some wood stored up. Afterwards, spare timber becomes swappable for gold, letting you retain the services of a few guns-for-hire, who can be ordered to accompany you into battle. With their help, you’ll gain enough firepower needed to survive the shootout and claim victory.

Just one problem: If a single link in the chain breaks down – e.g. not enough laborers have been assigned to produce extra goods for sale or drought, famine, plague or fire strikes, leveling your population – the best-laid plans can come to a grinding halt. Ironically, scenarios only get more involving the further one progresses, as you attempt to grow corn and carrots; raise cattle; keep tabs on unemployed workers; spruce up homesteads with morale-boosting flower pots and fountains; enjoy attack- or productivity-boosting upgrades; reform town drunks; and manage a staff of uppity lawmen.

Consider it a small mercy that a variety of helpful on-screen notifications, visual alerts and one-click commands (plus a nifty mini-map that lets you quickly jump to positions of interest, i.e. quest-giving characters or areas under bandit attack) are at your fingertips.

If things sound complicated, don’t be scared. Almost everything’s controlled with the mouse, clearly-defined icon-based menus aid in navigation and a comfortable learning curve scales difficulty level and mission scope at a pace suitable for even total greenhorns. As such, you can take time to savor the many sights and sounds of a bustling township as structures are slowly erected before one’s eyes and citizens happily shout to acknowledge when orders are assigned. Brightly colored, finely detailed and generous with its humor (see: female gunslingers who yelp “you got it, sugar” in gravelly-voiced baritones, your sidekick “Redd” Baron, structures named “Best Tent Ever,” etc.), the title’s actually a pleasure to watch and enjoy.

Mind you, unfortunate issues which have dogged the series in the past again rear their head, while fresh hiccups may also vex. Difficulty levels can unexpectedly spike at times. Objectives aren’t always clearly explained. Speech samples are repeated to the point of obnoxiousness. Pathfinding issues sometimes prevent units from reaching their assigned destination. Even with optional quest restart options, you may waste considerable effort on stages before it becomes obvious you’ve reached an impasse. There’s no speeding up the passage of time, demanding you needlessly wait time and again for resources to amass and combat to resolve. And while holding the space bar lets you rotate the camera, smaller objects (e.g. chunks of meat) can still get lost behind 3D background scenery.

But the reality is simply as follows: Occasional rough edge aside, the stunningly rendered and sweeping Southwestern-flavored soundtrack bolstered Westward III promises countless hours of happy adventuring on the open range. That goes double when you factor in collectible trophies and support for open-ended Sandbox play in three separate forms (relaxed pace scenarios, disaster-dodging options and bandit-foiling escapades, to be specific). As such, it’s sure to have fans of frontier escapades, tactical challenges and virtual dollhouses all screaming “yee-haw” with excitement, indeed.