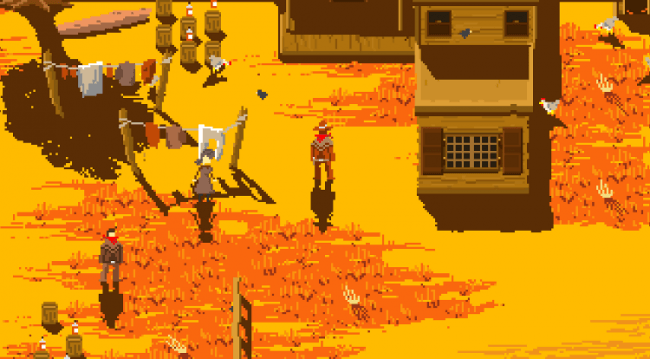 You don’t have to wear a cowboy hat while you play Westerado, but it’s highly recommended.

Sometimes I wonder if I’m meant to live the life of a cowboy. I love cooking food over an open flame, and I’ve always thought horses were pretty cool. Far as I know, those are the only real requisites for becoming a good old fashioned buckaroo. But I’m not sure I could handle the immense heat the Wild West is known for, and I’m also terrified of snakes. Guess I’ll just have to live out my dreams through Ostrich Banditos’ Westerado, a totally free browser game that has everything a cowpoke could want.

Of course, it’s not all moonshine and horseback riding in Westerado. The game begins with the protagonist’s family getting murdered by a bandit, leaving him no choice but to set out in search of the culprit. This means traveling all about the west in search of clues and leads, as well as taking up various odd jobs along the way to keep the money coming in. A cowboy’s gotta eat, after all.

While the game is linear in the sense that there’s a main plot thread that ultimately concludes, you’re more than welcome to ignore that and instead explore every nook and cranny of the surprisingly sprawling world. The game is really good about rewarding its more adventurous players, offering up a variety of shooting sequences with bandits, a steady stream of witty dialogue to enjoy, off-the-path locations to explore, poker to play, and plenty more. You can also accuse most people you speak with of being the bandit who murdered your family, which usually nets you a humorous response.

But there’s also plenty of joy to be found in just roaming endlessly, soaking in the game’s gorgeous 16-bit visuals and twangy soundtrack. Both of these elements work together to create a surprisingly cogent atmosphere, and within minutes of playing I’d made a silent agreement with myself that I had to see absolutely every inch of Westerado. Don’t be surprised if you end up doing the same.

There are a few minor issues that hamper the otherwise fantastic experience, though. For starters, properly aiming during the shooting sequences can be incredibly challenging, as it’s extremely hard to gauge whether the barrel of your gun is lined up with the person you’re trying to shoot. This problem is perpetuated by the save system  – or the lack thereof, I suppose I should say. You can’t save your progress in the game, and so dying in a gunfight can set you back quite a ways. You can still fast-travel to places you’ve unlocked, though, so catching up to where you were isn’t all cumbersome.

Westerado is what I’d call an agreeable game. It’s happy to let you play it in whatever way you’d like, and it offers up plenty of reasons to keep coming back even after you wrap up its main story arc. Much of this could be attributed to its atmosphere, which is one of the most well-realized I’ve encountered in a browser game. In fact, I’ve been listening to its soundtrack the entire time I’ve been writing this. That’s how unwilling I am to bid adieu to this endearing (and oftentimes goofy) game. 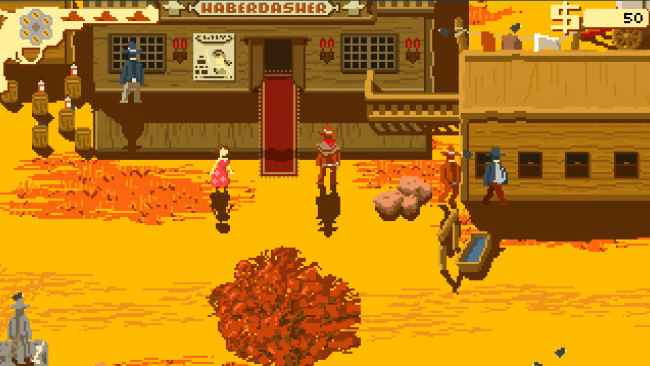 So back I’ll go, I suppose, to shoot up some of the many bandits, and provide some help to the ranch hands and other folks who need it. Because that’s what cowboys do.