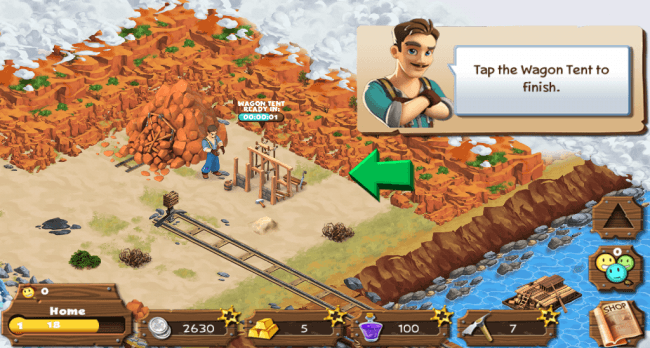 Kiwi Inc. may be a young company, but its games have already been numbered among the Top 100 Grossing applications on Google Play. This week, the company attempts to crack the Top 100 list once again with western-themed social sim, Westbound. This FarmVille-like mobile title features everything we’ve come to expect from town-building games; unfortunately, it does nothing to advance them.

Westbound begins without preamble, and immediately upon starting, you’re whisked away to a desert location where you find a guy trapped under a wagon wheel. You let him out, and he asks for help exploring the nearby cliffs. You go along with the idea (because if you don’t, the game’s over), and the two of you find a pretty lady trapped under some rubble. You help her out (while wondering if everyone out West just stands around waiting for something to fall on them), and then the three of you set about constructing a settlement.

This all sounds fairly dynamic, but like everything in this kind of game, it’s all accomplished by the repetition of two things: clicking and waiting. Westbound teaches you this click/wait technique in a brief tutorial that demonstrates building structures, planting and harvesting fields, removing random debris, and exploring the surrounding cliffs. It then introduces you to quests, which are simple assignments given to you by the main characters. You might, for instance, be asked to perform some kind of settlement-expanding task like “plant two apple trees” or “build a barn.” While not particularly thrilling, these tasks do move the game along by giving you specific things to do. Once they dry up however, you’re faced with a choice: extend your play time by spending money every few minutes, or stop playing altogether.

This unattractive impasse isn’t exactly surprising; it’s how social games make their money. Still, some games do a better job of allowing you time to enjoy them before making you pay. Westbound starts predictably, by employing some familiar, FarmVille-like methods. Every action, whether it be gathering wheat or building a dog house, takes time to complete (anywhere from a couple of seconds to multiple hours) and requires some form of energy. In addition to this, some actions can’t be performed without the requisite tools. For example, exploration requires stone picks. Once you’re out of those, you can do one of three things: stop exploring, whip out the greenbacks and buy more picks, or as in Kiwi’s other sim Shipwrecked: Lost Island, earn additional picks by agreeing to download other Kiwi titles.

This type of social game model is fairly insidious, since it’s designed to keep you spending money for, well, ever. Since every action takes time to complete, and you’re given tasks that take an hour or more to finish, you’re forced to constantly spend money if you want your play sessions to last longer than five minutes. It’s frankly not much fun starting a handful of tasks only to find out they won’t be done for hours. Far better to spend some of your “tonic” resource to speed the process up; or at least that’s what Kiwi is hoping you’ll decide. They encourage this opinion by providing resources in the slowest of trickles, thus making resource purchasing basically unavoidable.

Along with constantly manipulating players into spending money, Westbound‘sother issue is that it’s so much like games we’ve already seen. It does have cute western-style artwork, but nothing about the look of it sets it apart from a hundred other social sims just like it. Its gameplay too is basically a rehash of other games’ mechanics and makes no attempt to improve upon them. This provides little motivation for players to stop expanding their colossal FarmVille estates to start over again here. The only thing that sets Westbound apart from other social sims, really, is its character dialog which is strange, stilted, and peppered with words I’m convinced aren’t really words. I mean, what the heck does “slagander” mean, anyway? 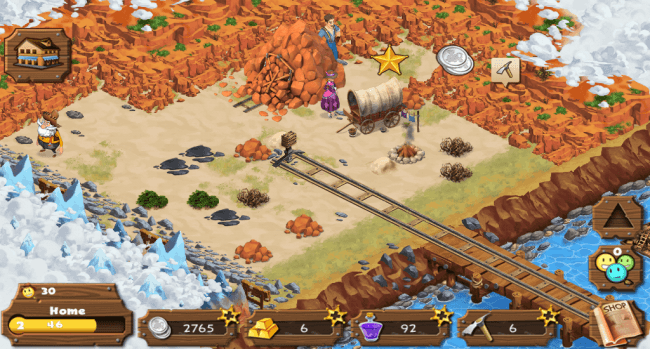 This is a classic case of good idea/poor execution. When the first social sims appeared a few years ago, we tolerated their less attractive aspects (like constantly having their hands in our pockets) because they were new, but these days we expect more. Westbound‘sfailure to progress the genre and disinclination to allow us time to “bond” with it before wanting a handout sends it off the rails faster than a handcart down a dusty mineshaft.

Despite a recent downturn in the popularity of social games, building sims remain one of the most popular social genres. With players still into these games, it’s no wonder Kiwi Inc. decided to make one; it is mystifying, however, that the team didn’t put its skills to better use. While Westbound is competently-made, cute, and accessible, it’s also unsurprising, monotonous, and unpleasantly inclined to prioritize transactions over fun. The lesson here is that disguising a game’s financial ends requires a generous dose of pure entertainment, and unfortunately, Westbound makes its ends all too visible.