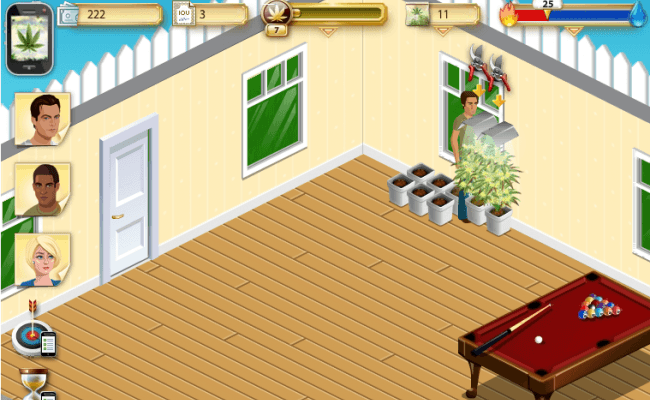 Ever aspire to be a drug dealer? Yeah, me neither. But gamers can now live vicariously through Ecko|Code’s latest Facebook offering, Weeds Social Club, based off of the hit TV series. The game has an interesting baggie of tricks, but it might also be one toke over the line.

Weeds has you play as either a guy or girl who is down on their luck and about to lose their home. Lucky for you, a friend of a friend swoops in with a job offer you can’t refuse. Under the guise of growing tomatoes, you’re conned into growing pot (marijuana) instead. Once your new connection calms your nerves and walks you through the basics of dealing weed, you’re well on your way to once again paying the bills, and then some.

In spite of its seedy (pun intended) tropes — load screens that picture a bong, mood music, and more reefer jargon than you can shake a stalk of New York City Diesel at —Weeds is a farming sim. You’ll purchase planters, grow your herbs, fill orders for friends and neighbors, and pass the product off to a pusher who gets it out on the streets for you. You turn a profit, buy some furniture, as well as additional tools and pot, and repeat the process. 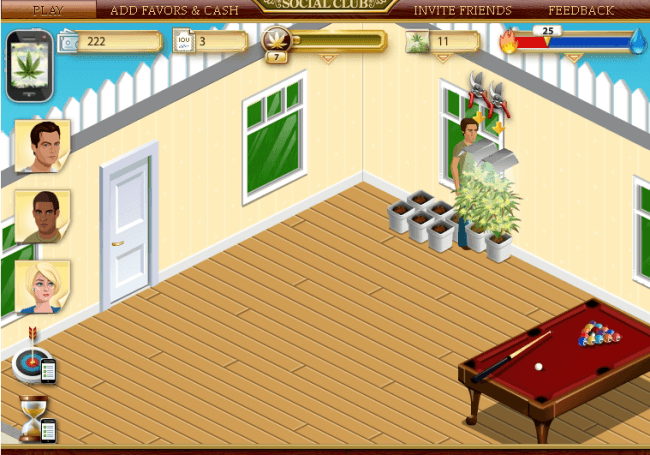 Like most games of its ilk, Weeds presents you with regular quests, an impetus to keep your gardens green. The old lady down the road might need a bag of kind bud for her arthritis, and you’re all too happy to oblige. Other times you’ll have folks wanting to come over for a visit, requiring you to earn enough dough to purchase specific types of furniture. It’s a fine, though somewhat weather-worn, formula.

Where Weeds gets a bit hazy, however, is not in its THC levels so much as in its pacing. Whereas some plants require just a few minutes to grow, others can take hours. In order to maximize the amount of THC you yield from a particular plant – a requirement for many quests and an element of the weed that adds to its value on the streets – you are required to harvest the plant within a narrow time frame from when it’s fully grown.

Either way, the system is impractical. You’re either going to be tethered to your browser literally watching grass grow, or you’ll need to set your schedule to the in-game clock, rushing back whenever it’s time to harvest your crops. 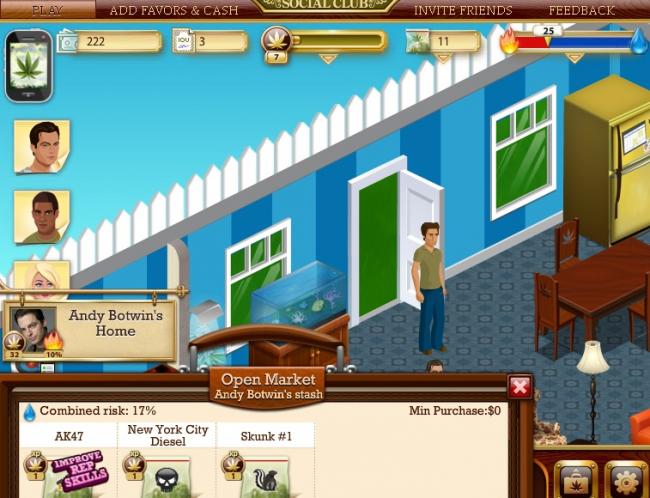 Weeds has an enjoyable interface, and sans a few bugs here and there (the game is still in beta), all its bowls are packed and fired up. The menu system is sleek and inviting, though the actual in-game art is boring and bland. Animations look goofy, with models that will often move while their legs stand still.

The music is an eclectic mix of groovy themes that make a good match for the game’s premise, and the sound effects are mostly satisfying. However, any time someone calls you on the game’s cell phone, the phone will continue to ring without stop until you answer it. If you’re doing something in another browser, it can be quite annoying.

Weeds isn’t really a subversive experience, nor is it likely to appeal to mainstream audiences. It riffs on a handful of well-established gameplay ideas, but it doesn’t necessarily execute any of them well. There are some fun strategy elements here, and watching your business grow can be mildly rewarding. But with a slow pace that demands constant attention, it’s a concept that quickly grows old.