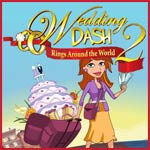 Casual game sequels tend to look and play similar to its predecessors, but PlayFirst’s Wedding Dash 2 takes the cake, if you can pardon the pun. Despite a few minor additions, this game is virtually identical to the original. To some time management fans this will be just fine, but to others, including yours truly, there is little here to justify the cost. Yes, it’s fun and frantic and hard to put down, just like the first Wedding Dash, but those expecting more might decline the invitation to this affair. Think I’m harsh? Download the playable demo to see for yourself and post your comments at the bottom of this review.

Quinn, a bridesmaid-turned-wedding planner extraordinaire, is approached by a brash billionaire at the start of Wedding Dash 2: Rings Around the World, who says he’s been following her success and invites her to compete against other wedding planners in a new reality TV-style contest to see who’s best. The winner will have the honor to plan his daughter’s exclusive wedding.

Quinn will manage weddings in a handful of spots around the world, including Niagara Falls, the Rainforest, in an ice palace, and others, but we don’t want to give everything away. But while the style of the wedding varies slightly based on the background graphics, the core game-play is the same (even the song is the same for each location).

First, Quinn must read the couple’s requests for their wedding as it pertains to food (one couple might want spicy dishes while other prefers fruity choices), cake style, flowers, transportation to the event, decorations, and so on. You’ll have three choices to make before each wedding and you have a chance to win up to $300 that goes towards your minimum amount of money you must make at each reception (more on this in a moment).

Like last year’s game, Wedding Dash 2 challenges Quinn to take care of guests at the wedding, including seating guests where they want (or don’t want) at a table, serving them food (appetizers, entrees and cake), taking gifts from guests and handing them to the bride and groom, and taking care of "incidences" such as shooing away pigeons who get close to the chef, dealing with choking guests ("Poor Uncle Charles, can’t we get him puree instead?" the wife asks) and screaming kids.

As the competition heats up we also learn of acts of sabotage, presumably by other competitors, including waitresses with a broken leg, food tampering and stolen tables. A new character, Joe Wright, takes photos of guests at the wedding, and once in a while Quinn’s friend, Flo, from the Diner Dash games, will help out, too. Note: you have to click the guests’ body for it to register, though it would have been convenient if you could also click on their speech bubble, too, indicating what they want.

Different kinds of guests will arrive, too, such as slow-eating seniors, gorgeous women everyone wants to sit beside, a mother and daughter who need to sit side-by-side, young men looking for love, dysfunctional twins, inebriated uncles and social butterflies. Wedding Dash players might remember the bawling Aunt Ethel, who is also back again.

If you make the minimum amount of money at the end of the function – and there are ten weddings per location – you advance to the next level and get to choose from some upgrades such as a faster waitress of chef, more plates, more comfortable chairs, and so on.

Another way to ensure you’re making as much cash as you can is to chain tasks together, which will be familiar to Diner Dash players. This means Carrie should be carrying two deserts instead of one, bringing two gifts to the bride and groom, chaining two photos to be taken at the same time and so on. In fact, pairing tasks is pretty much the only way you can complete these stages.

Mess up and you might unleash Bride-zilla or Groom-Kong, which could get ugly. Yes, the game is quite funny, whether it’s the comments the couple makes, the animation of the dancing guests or the potentially disastrous scenarios you’ll encounter.

Along with the main Career mode is a secondary game type called Endless Reception, where Quinn must manage a never-ending stream of guests and the action gets faster and faster with each level. I preferred the Career mode since it gives you something to work toward.

Wedding Dash 2: Rings Around the World isn’t a bad game at all – before you know it it’s 3am and you’re still feverously clicking away to manage the perfect wedding. But despite a few new locations, guests and scenarios, it’s basically the exact same game as the original. I’m sorry, but a game that’s only, say, 10 percent new, isn’t necessarily enough to justify the purchase.