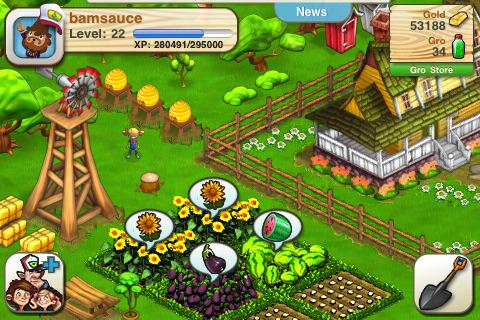 If you’re a fan of ngmoco’s unique brand of portable social gaming, it’s time to put down your sceptre and pick up a pitchfork. The minds behind ngmoco’s popular We Rule are back, and this time they’re tackling the granddaddy of all social gaming genres: farming.

Using ngmoco’s own Plus+ network as their social backbone, We Farm tasks players to grow crops, raise animals, and set up buildings in an effort to earn gold and experience points. New buildings and crops become unlocked as the player levels up, and friends can visit your farm to place orders at your buildings, thereby earning you more coins and experience.

As you can probably guess from the name, We Farm is little more than We Rule in overalls. The two games are virtually indistinguishable from each other, sharing everything from common gameplay mechanics to a similar visual style. The experiences are so alike that we were a little astounded to find that kingdoms couldn’t place their orders at neighbouring farms and vice versa. Still, being similar to We Rule isn’t a criticism. With new content being the lifeblood of We Rule, a new experience that is essentially a re-skin of their previous offering should be more than enough to satisfy fans of the now growing We series.

That’s not to say that We Farm doesn’t have a few new tricks up its sleeves, though. While most of the mechanics like raising crops and constructing buildings are cut and paste from We Rule, raising animals adds a new twist to the formula that can change the way devoted players will approach the game.

To raise an animal, players will purchase a specific building that will house a specific creature. A coop can raise chickens or ducks, for example, while a pen could raise pigs or sheep. Once you place an animal in their home, they take a certain amount of time to be raised – just like a crop. But unlike a crop, you’ll need to care for these animals before they reach adulthood if you want to get the big payoff.

To care for an animal you’re going to need to show it love. You’ll pet them whenever a heart appears over their head, and every pet they receive will raise their happiness meter. Get that meter to 100% before the critter becomes an adult and it will return from the county fair with a blue ribbon. In turn, that blue ribbon will upgrade the building from a home where animals can be raised to a building showcasing the blue ribbon animal where your friends can now place orders. 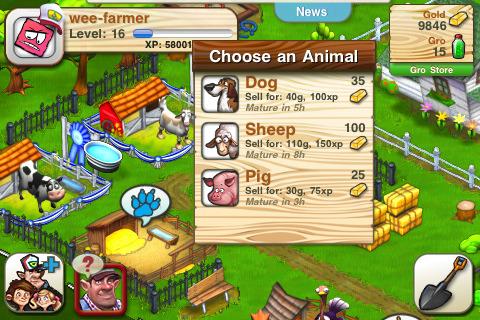 Our biggest complaint about the first game in the We series was that there wasn’t enough to do, and that play sessions only needed to last a matter of seconds in most instances. Thanks to the introduction of animal care, We Farm manages to nip that problem in the bud. We only wish the game supported iOS4 multitasking so that we could quickly switch back to check on our farm every 5 minutes and see which animals needed some love.

In addition to the iPhone version, there’s a similarly free We Farm for iPad. Both versions offer an identical experience and can provide players access to the same farm thanks to ngmoco’s Plus+ network, but in a head-to-head competition we’d have to give the advantage to the iPad. The larger screen allows you to tackle your whole farm comfortably without needing to zoom and scroll, and the information bars and menus feel less intrusive than they do on the iPhone.

The bare bones of We Farm may share a tremendous amount in common with the first release in the We series, but the addition of animal raising and the fun rural flavor help to keep this second entry from feeling like just a rehash of a game we’ve played before. If you didn’t like We Rule, We Farm will do little to change your mind. But for the rest of us? It’s time to roll up our sleeves and head down to the farm.