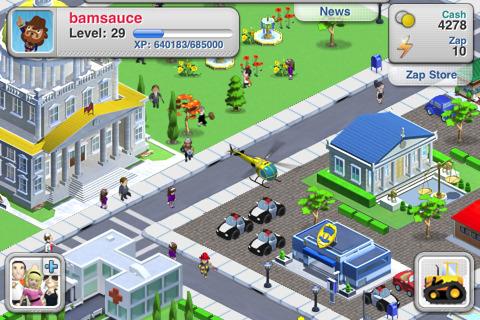 After first spending some time in a fantasy kingdom, and then later doing some duties on the farm, ngmoco’s social We series is making a trip to the one place nearly all of us are familiar with: the city.

Much as you might suspect, We City takes the formula that player’s have grown accustomed to with We Rule and tweaked it a tad to better fit the city management motif. Rather than introducing new elements to the formula like We Farm did, We City seems to cherry pick different gameplay elements from both We Farm and We Rule to create a fairly enjoyable hybrid.

Factories, for example, play out exactly like the farmland in We Rule. You’ll select an item to manufacture (rather than a crop), return when it’s ready to ship (rather than harvest), and if you take too long you’ll miss the scheduled shipment and abandon the item (rather than your crops spoiling).

The other big gameplay element comes from We Farm. While in ngmoco’s rural management game you’re in charge of raising animals that you can give “love” to every few minutes until grown, here you’ll study at the university, conducting “research” every few minutes to try and max out your research meter. If you maxed out love in We Farm you’d earn a blue ribbon at the state fair, converting the animal’s building into a shop where other players could place orders. If you max out your research in We City, the end result is largely the same.

Other elements, too, are little more than a palette swap to fit this game’s urban theme. You’ll get city-themed shops like convenience stores and motels for your friends to place orders at, you’ll build houses and apartments to collect rent instead of taxes, and your citizens will stroll around in business suits and construction helmets rather than farmer’s overalls or peasant garb. In effect, We City brings absolutely nothing new to the table. 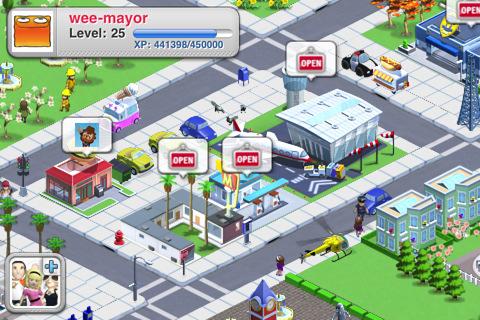 But is that really such a bad thing? By combining the best elements of both We Rule and We Farm, ngmoco has created a social game that will be instantly familiar to veterans of the earlier games while remaining enticing to a whole new audience. Fans of city-building games who may have otherwise given previous We games a pass will no doubt check this out thanks to its free price tag, and they’ll find that it easily stands toe-to-toe with competing games like City Story.

If you’re already a fan of ngmoco’s earlier We games you’re not going to find much new in terms of gameplay, but you’ll no doubt be pleased by the new setting and fun buildings at your disposal. If this is your first time in the world of We, just know there are two earlier titles that will no doubt satiate your appetite for more should their unique brand of city-building tickle your fancy.