Easy to get into, difficult to master. Tons of levels to play through. Variety of gameplay elements keep the concept fresh. Endless modes available.

May be too difficult for some players. Sticky mouse issue can kill gameplay.

Check out the delicious curves on this indie puzzler, Waveform

I vowed that after I left university, I would never look at another mathematical wave for as long as I lived. Those evil things full of sin(e) following me around for years afterwards, but eventually I managed to calm the nightmares down and get on with my life.

And yet here I am now, not only staring at waves, but even tracing along them and enjoying them. Then again, this time around I’m interacting with them in a video game medium rather than having them thrown at me by a professor. And you know what? Waveform has definitely made me really that I was too harsh on waves, and all they really needed was some slick gameplay splashed over the top.

Waveform takes place in deep space, where an evil force has scattered light rays all over the place, creating black holes and other nasty elements. Your job is to hoover up all the light that you can find and use it to fight off the evil. Unfortunately you’re a little bit restricted in how you move – in fact, you can only, kinda… wave around.

Each level has your ball of goodness moving along a light wave, and any balls of light that are caught in the wave will be gobbled up by your hero ball. As you’d expect, they aren’t all comfortably placed along your default wave, and it’s necessary to continuously change the length and height of the wave in order to catch as much light as possible.

This is all done with your mouse – clicking and dragging left and right changes the length of the wave, while dragging up and down changes the magnitude. And while catching light is all well and good, it becomes obvious quickly that there is a set path to flow down that will bag you 100% completion for each level. Finding that path is extremely rewarding, and lends itself to plenty of real “ah-ha!” moments as you move the wave into the exact path the game clearly is looking for. 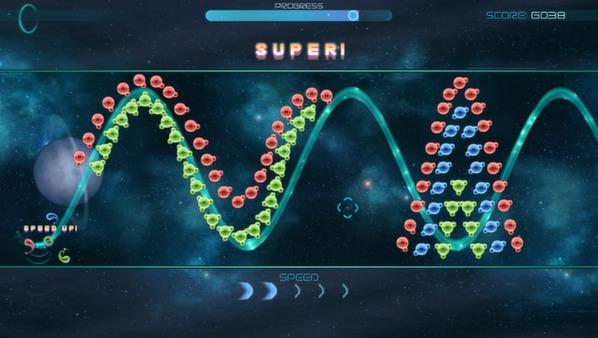 It’s not as simple as that though, as there are plenty of elements at play. The more bunched up the wave, the faster your particle will move, so you cannot simply pull it in tight whenever you lose your path or else you’ll lose everything else too! And if you’re beginning to find it too easy, don’t relax just yet – collecting lots of orbs in a row will make your particle grow in size and move even faster, so it’s always a very tense experience which requires your full attention.

What this all leads to is gameplay which is incredible easy to pick-up and play (so much so that there isn’t even a tutorial – it goes straight into play on level one), yet so, so tricky to master. Getting 100% on any level, even level one, takes some real concentration and stamina.

There’s even more to it all as well, besides this crazy balancing act. You have completion goals to aim for, light rings to pass through for maximum multiplier bonuses, exit portals to bag, special waves that you need to constantly move through to earn all the points, stars that unlock later levels, special levels that throw visual distortions and the like your way, boss battles… 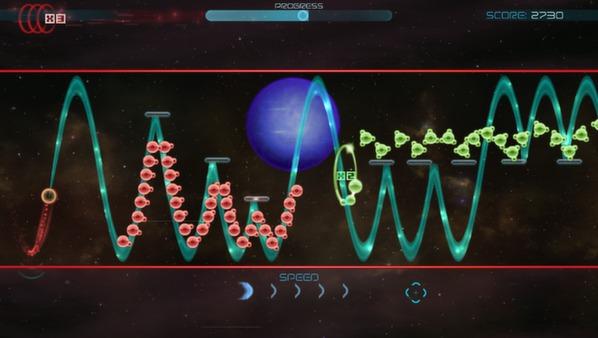 What we’re trying to say is, Waveform is far more than first meets the eye, and even hours into play you’ll be finding new elements that completely throw off how you’ve been playing up to that point. You’ll also be trying to bag the various achievements that are available on the side.

We’d really like to highlight the music in the game too, which matches the mood perfectly, and in some levels slows and quickens to match the wave – excellent stuff all around.

In fact there are only a couple of little letdowns to mention, none of which are deal breakers. First off, as mentioned before, the game is very difficult – perhaps too difficult for some. It’s worth grabbing a demo of the game first before buying if you’re worried that you’re not going to be able to keep up.

The other thing is a strange bug we came around – if you move the mouse pointer over to the left-hand side of the play area, it will get stuck and not be able to move anymore unless you really shake your mouse a great deal. This caused numerous deaths during play for us, and we’d love for it to be fixed – but honestly, this could have just been our pre-release copy of the game. For all we know it’s the sort of little bug that may have been squashed in the final release, and if not, we’d expect it to be dealt with in an early update.

Taking into consideration all the content you’re getting here, plus the various endless modes to play through and the online leaderboards, it’s very difficult not to shout the name Waveform from the rooftops. It’s a brilliant concept, well executed, stylish, bold, and perhaps most importantly, brimming with personality. Miss this at your peril.