Wave – Against every BEAT! Review 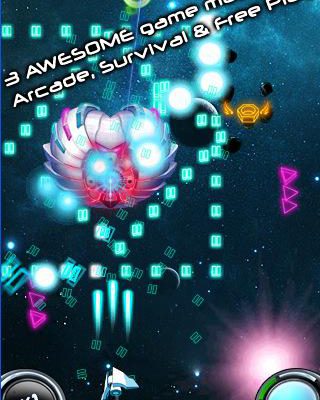 Time was, video games were a bona fide home for the rhythmically challenged. While all the cooler kids were out dancing the night away, there was much solace to be found in a bout of Mario, or a spin on Sonic with a mug of warm milk before bed. Fast forward to the present day, and you’re hard pressed to find a game that doesn’t want to test your timing in some form or other – from taking on Dance Central on Kinect to the leagues of Tap Tap games on iPhone, if you’re out of time, then you’re firmly out of tune.

Wave – Against Every BEAT is the kind of game that those more traditional, less balanced gamers will truly appreciate, namely because it gives the impression that whoever is playing has a handle on the music. Though the game’s intro spiel talks up a link between your success and the potency of the soundtrack pulsing in the background throughout play, it’s a link that, in reality, is completely non-existent.

In practice, Wave – Against Every BEAT‘s claims to the rhythm-action crown are fairly weak. Instead, what’s delivered here is a straight shoot-em-up, decorated with the kind of flair Geometry Wars made its signature almost a decade ago.

Played out amongst the stars, merely surviving the barrage of alien attacks that come your way is your main aim. The games rolling stages hand you control of a single ship, firing automatically from start to finish and navigated by simply by gliding your finger around the screen.

Heading straight for you are chains of shapes – or ‘cubes’ as the game, quite bizarrely, names them – that dance around the skies in set patterns as they fly. Naturally, as well as avoiding all contact with them, the idea is to shoot as many of them down as you can, picking up the stars they leave behind as reward.

Most of said shapes are little more the cannon fodder to begin with, but they act as vital cover for the array of ‘super cubes’ that offer the greatest threat. These take far more firepower to conquer and bring a level of intelligence to their movements, either dodging your attacks or positively charging at you as soon as they slip into view.

They are, however, one of the factors that transforms Wave – Against Every BEAT from a mere shoot-em-up also-ran into something rather special. In their wake are left an array of power ups that fit in perfectly with what soon becomes the frenetic pace of play, either doubling or tripling your firepower, or blasting almost everything that moves with a catalogue of lasers that shout out in all directions. 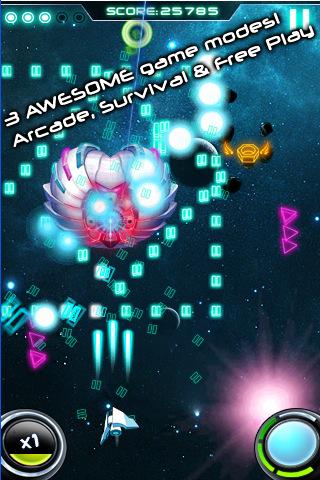 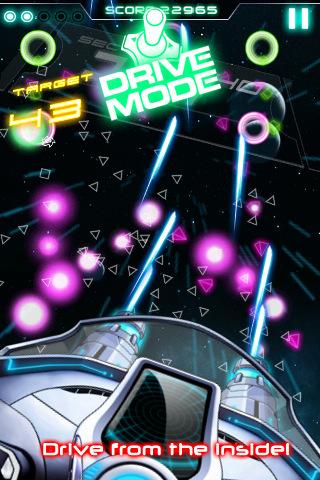 Also of note are the mini bonus rounds that appear as warp gates in the midst of play. These really help break the game into manageable portions, either giving you the chance to control two invincible ships in mini free-for-alls, or – quite brilliantly – letting you fly your craft from the cockpit, using the accelerometer to glide through space with a touch of realism.

In truth, the only part of Wave – Against Every BEAT that doesn’t really deliver is the music itself, which trundles on as if being played by someone in the next room. The lack of sound quality is also reflected in the very track listing – the sum of which sounds less like cutting-edge electro and more like the record collection of an out-of-work mid 90s DJ.

It doesn’t help that the game’s free style mode, which promises the option of taking on play while listening to your iTunes library, doesn’t seem to work.

Regardless, despite its big billing, music is actually but a very small part of what Wave – Against Every BEAT has to offer. Like the best shoot-em-ups, play here is about fine margins and non-stop action, and once the onslaught begins, it’s especially hard to stop the beat running away with you.