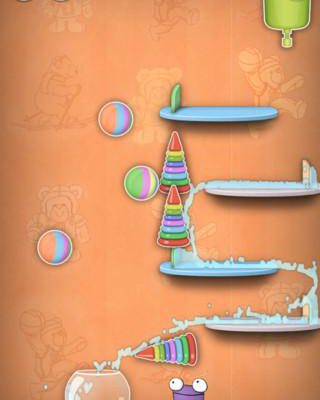 Fluid-based physics puzzle games have been appearing frequently in recent weeks, and Watee is the latest iOS release for that genre. The game boasts a number of fantastic ideas to differentiate itself, but comes up short in execution with relatively poor intuitiveness, an indecisive core design, and frustrating physics and usability issues.

Watee joins puzzle games such as Feed Me Oil and Sprinkle, but is more comparable to the former. Developed by Unnyhog Entertainment, the game tasks players with helping out a water-loving, purple critter named Watee by filling up his aquarium with water. Of course, this wouldn’t be much of a game if it was done logically by holding it to a faucet, so players must use a quasi-Rube Goldberg fashion to bring the water to it.

At its core, Watee has been done before and is strikingly similar to Feed Me Oil. However, one of the beautiful things about puzzle games, is that uniqueness lay within both new mechanics and level design itself. In that regard, Watee succeeds, and actually boasts a great deal of new and interesting ideas. For each level, players can move a spigot, located at the top of the screen, left or right, then by touching it and sliding a finger upwards, activate a flow of water. Like Feed Me Oil, the amount of water is limited, and the aquarium must fill to 100 percent.

At the base of each puzzle is Watee’s aquarium, which cannot be moved. In order to get water to its destination, players must make use of static and movable objects. Static objects include basic elements like shelves, that simply get in the way, and more interesting ones like heating coils or sponges that evaporate or absorb water if touched In terms of movable objects (which can also be rotated), these consist of things such as plates to redirect flow, bowls to act as ramps, fans, funnels, and so on. What stands out most about these items though is that many can interact with each other in order to solve each puzzle.

A perfect example is the combination of a static heating coil and an air conditioner. When water touches the coil, it evaporates. When that steam hits an air conditioner, it condenses back into water. As such, players would use a movable fan to blow steam toward the AC unit and create a new stream of water. Unfortunately, this is where the troubles begin for poor Watee. 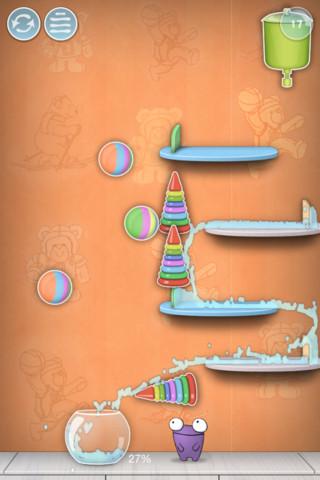 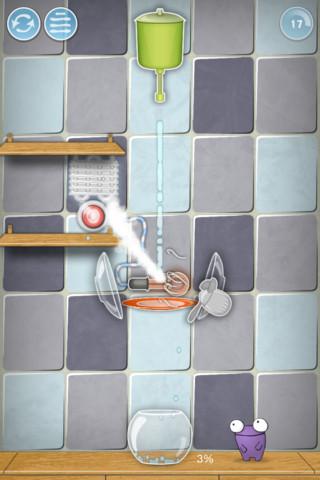 None of this is intuitive. In the AC example, it took a screen shot in the App Store to set that light bulb off. Watee never gives any instruction on what new things are and do. All players get is a short movie at the start of a new game that shows Watee catching water with his bowl, displaying the core objective of each puzzle. To many, this might not be a big deal, but it is only the beginning.

The biggest qualm with Watee is that it just doesn’t know what it wants to be. Most of the game is centered around puzzles, but every couple of levels it tries to shift gears and become more twitch-reaction based with moving objects in which players must time short bursts of water release so that it doesn’t get deflected. This becomes irritating on two levels, as one, players are not given a lot of water to begin with, so it is very, very easy to fail, and two, it’s just plain boring having to sit and wait for a floating plate to move rather than problem solving.

To round out the list of annoyances, the water physics feel poor. Yes, it still is basically correct, but the water feels erratic and it splashes everywhere. For example, when a stream of water falls straight down on a flat object at a 45 degree angle, unless it is coming out of a hose (which it is not in this game), it should neatly flow downward. Here, it tends to launch a third of the water up the plate as well. Moreover, and the most frustrating aspect of the game yet, is that it decides that the player has failed a level before they actually fail.

In virtually every physics game, a level does not end until all physics-enabled objects stop moving for two or three seconds. Watee decides that well before this threshold is met. In one obnoxious example, a level that was attempted several times was failed with the aquarium at about 96 percent capacity. Water was still trickling down toward it, but because it was moving so slowly, the game evidentially got impatient and said “sorry, you’re bad” and reset the level. Thankfully, levels can be skipped; something that is made even more important due to an incredibly ill-conceived difficulty curve (one should not get stuck and have to skip level five). 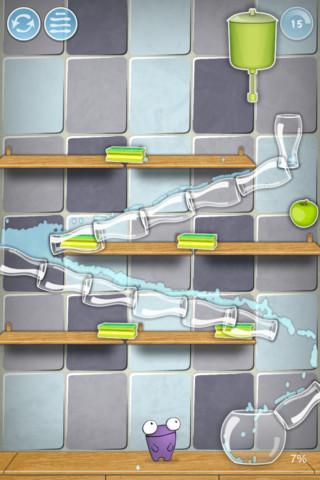 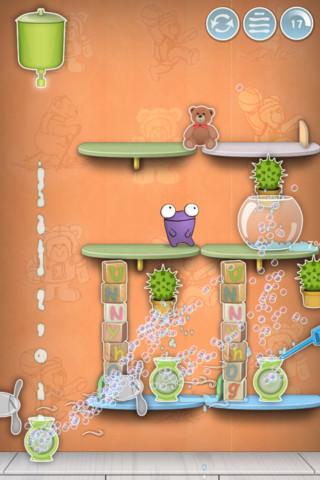 As for any other features warranting mention, Watee also has the typical “collect three items” mentality where players can attempt to collect up to three apples in each puzzle by touching them with water. These are used to unlock another set of levels (there are 40 in total), but there is minimal challenge with this as most apples can be collected accidentally as water just splashes everywhere. Regarding visuals, the game is a cute, using an almost pastel-style color palette, and the sound complements the upbeat and casual nature of the game.

Overall, Unnyhog offers a number of great ideas with Watee such as unique items and item combination. Unfortunately the execution is of low quality, and that attempt to be different has led to unnecessary and boring timing levels and poor instruction. Couple this with wonky water physics and poor usability and one has the perfect recipe for frustration. Watee looks cute, and it has its perks, but until a few of the kinks can be worked out with future updates, it is probably a game best passed on.

THEM: The Summoning Review