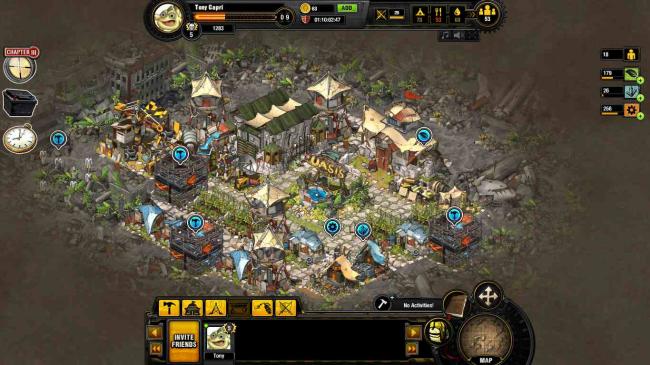 As a fulltime gamer, I’m having a great time watching social gaming evolve. On Facebook (and now Google+), we’ve gone from simple text adventures and virtual farming, to epic sagas wrapped in accessible packaging. CrowdStar now once again ups the ante with a strategy romp called Wasteland Empires that’s easy to jump into but almost impossible to tear yourself away from.

Wasteland Empires is another hybrid that mixes elements of games such as Warcraft with city building and Facebook sensibilities. In many ways, the game’s approach is quite similar to War Commander, but the progression of building up your civilization, as well as the game’s overall balance and gameplay design, are much more on the mark than previous contenders.

The game is set in a post-apocalyptic world reminiscent of Fallout, and the first order of business will be carving out a livable environment for your people. All life revolves around water, which means your stronghold must be constructed near a main well. Auxiliary wells can later be built to expand your metropolis, but first you’ll need to clear rubble using your civilian population. Clean up the wasteland around you, earn resources, build structures, research technology – the mechanics of Wasteland Empires all fall neatly into place.

Of course, you’re not alone in the wasteland, and not all of your neighbors are friendly. It’s a dangerous world out there, so you’ll need to protect your stronghold with towers and traps, as well as take more preemptive measures in order to secure your domain. There are various types of troops to train, and commanding them in battle is fairly straightforward.

Units in Wasteland Empires are grouped into squads of 10, with slots for additional squads opening up with each successive tier upgrade. You can command squads individually; however, if you press the “select all” button, there seems to be no going back. This can be problematic, since unit types have very specific attributes. Having vanguards speed ahead to enemy towers before your slow-moving crushers (designed specifically to take out enemy defenses) will usually mean the complete and utter annihilation of that particular squad. If you plan ahead, it’s a design flaw that be easily overcome.

There are, however, a couple of other problems that hold back Wasteland Empires from being all that it can be. When you upgrade structures, there’s no way to know beforehand what specific items you’ll need to complete the upgrade. What can end up happening is, your building(s) will sit in limbo until you can acquire the required items or purchase them with gold. 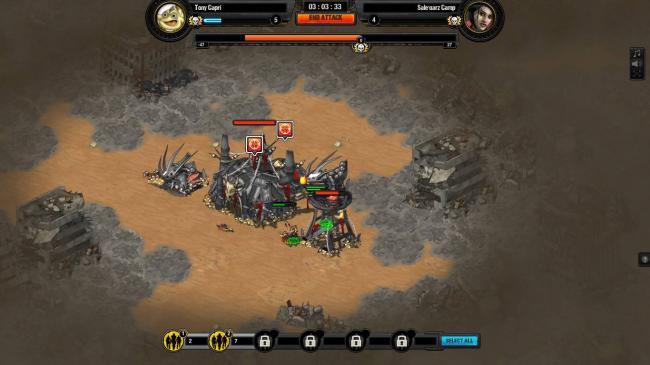 The other issue is related to path finding. Troops will occasionally get stuck on walls, and though you may try to circle back around, they often go right back to the same obstacles that previously blocked their respective path.

In spite of these stumbling blocks, I found Wasteland Empires to be completely addictive. There’s no energy to contend with, and the way in which the game is structured, you can literally get hours and hours of play each day.

It’s also one of the most visually ambitious games I’ve seen on Facebook. The hand-drawn assets offer detail rarely seen in Flash gaming, with animations of equal caliber. There’s also a surprising amount of variety, though the demanding graphical presentation won’t suffer a low-end CPU. If you’re running the game on an older machine, you’ll want to be sure to minimize the gameplay screen before moving from one area to the next.

Wasteland Empires isn’t an entirely new concept, but it builds upon an emerging formula in a way that tops the competition. It’s currently still in beta, so perhaps its few foibles will be worked out the future. Even in spite of its missteps, this is still a game totally worth checking out and investing time into.