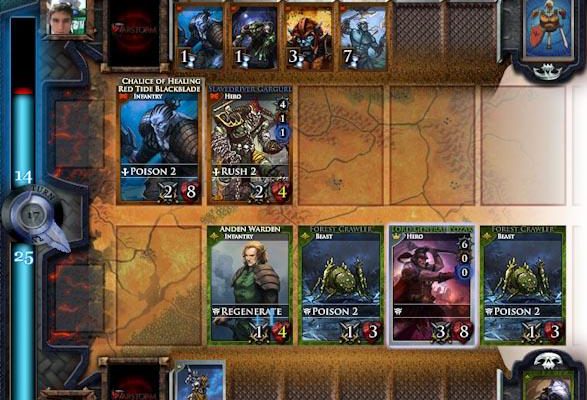 Warstorm is Magic: The Gathering without the magic

For the uninitiated, playing a collectible card game can seem as complex as casting the spells printed on the front of each card. A lightweight mathematical discussion lies behind each lurid painting of a scantily clad sorceress, and few novices these days have the patience to work this calculated arcanery with pen and paper. It’s perhaps no wonder, then, that Zynga dumbed down the experience a bit for Warstorm, an ambitious CCG that’s been out for a while on Facebook. It’s not a bad game, but it yields too much control to the computer in the name of accessibility, and in the process loses almost every bit of the genre’s magic.

Its heart is in the right place. Warstorm borrows deeply from Magic: The Gathering, which means that gameplay involves building a deck of playable cards and then arranging them into smaller decks (or squads, as they’re called here) according to faction or special abilities. You can expand your deck by playing through the campaign or buying packs of cards from the Warstorm store, and you can then use them to duel against other players. And, in stark contrast to most other Facebook games, there are no energy bars limiting your gameplay. Considering that Magic is still on top after 18 years, it would seem like this formula alone would make Warstorm a winner.

But once you enter a match, the problems roar. Rather than prompting strategic decisions based on the cards you draw from your deck, Warfont lets the game’s AI do all the dirty work for you. You can select which cards you want to go into your squad before each battle (and the single-player mission provides plenty of hints on which cards to choose), but the actual process of calculating hits and card order for each battle is decided completely by the computer. Newcomers will find this a welcome feature at first, until they realize that they still have no real idea of how to play. You literally sit back and watch the game happen without you.

Warstorm, in other words, misses the point. Any careful planning you invested in choosing the cards for your squads is negated once you see the AI attack a creature with a health value of six for two points when it could have wisely knocked out a foe with a health value of two. In other places, the AI will give a helpful buff to creatures that already have that buff as a static ability, thereby wasting an entire turn.

This automation extends to the multiplayer duels, which pit you against a random player that’s close to your level. It’s not as good or balanced of a plan as it sounds, especially since premium content allows players to nab powerful cards regardless of their level. The option to send rare cards to your friends helps considerably, but even so the battles in Warstorm rely too heavily on chance. 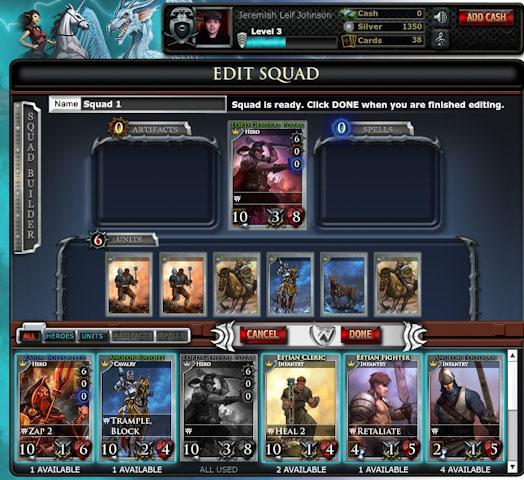 All the same, Warstorm provides a decently entertaining experience in short bursts if you’re willing to hand the reins over to the computer and content yourself with building up a few good squads. Artwork is always an attraction for games like this, and while the illustrations for each card never come near the sublime heights attained by Magic, Warstorm lets you zoom in on most images so you can both study the card and appreciate the artwork. The music is also decent, with appropriately epic marches shuffling over the sounds of the battling cards.

But if you’re a Magic: The Gathering veteran looking for a Facebook version of the legendary tabletop pastime, this isn’t your game. That would more likely be War Metal: Tyrant, which allows for a little more control over your deck at the expense of slightly poorer card visuals. Even newcomers might be more appreciative of the latter, even if only for its infinitely more engaging storyline. Whatever you choose, keep your senses honed for the one that kindles that strategic magic that comes from playing your best cards at the right time. You might just find the experience leads you back to the classic paper cards. And in this day and age, that almost counts as magic in itself.