Home / Reviews / Warhammer: Chaos & Conquest Review: Not Really a Game, But it Offers a High Level of Polish 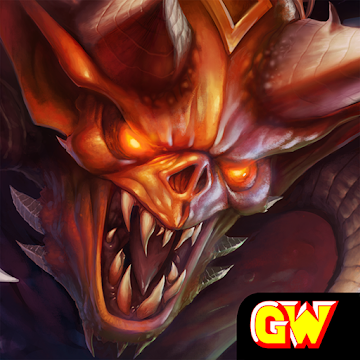 Warhammer: Chaos & Conquest is basically a very polished Game of War with the might of the Warhammer franchise behind it. It doesn’t remotely reinvent the wheel, but simply offers an alternate version of the strategy-lite experience that took mobile by storm earlier this decade.

We’re kind of surprised to see it, as the likes of Game of War and Mobile Strike seem to have all but vanished the last few years, leaving Clash of Clans, Game of Thrones: Conquest, and Guns of Glory to soak up the remaining players who like some strategy action on the go.

There is a reason these games disappeared though, and that’s down to the fact that once you’ve scratched the surface there’s no real gameplay on offer here. It’s just tapping spots on the screen to build and upgrade buildings that simply provide more stuff to tap on.

You’ll build stuff to gather and store resources, recruit troops, upgrade your Warlords (hero units) with a variety of equipment, study general upgrades, protect your base, and stuff like that. Build something and you’ll gain access to another thing you can build, and upgrading provides the exact same thing.

There are quests to complete but these generally serve as a checklist to ensure you’re not neglecting anything. Still, there’s something quite relaxing about ticking off a huge list and getting a bunch of resources as a reward, and given that there’s so much to do in Warhammer: Chaos & Conquest, it’s nice to have something to refer back to when you’re not sure what to do next.

You’ll likely join an alliance pretty soon into your time with Warhammer: Chaos & Conquest, and you pretty much need to. The alliance system is deeply intertwined with the experience. You’ll need them to help you speed up wait timers, to earn bonus alliance currency, and to get some help when a bigger player comes along and tries to take all of your stuff.

It’s not a particularly social element, unless you create one with a bunch of friends. It’s just helping out, and being helped, by a bunch of faceless people. Nonetheless, it does make the world feel that bit more alive, even if you never quite escape the fact that Warhammer: Chaos & Conquest is a mere cash-in.

Pay to win is as deeply integrated into the experience as the alliance system is. At the beginning you’ll get showered with gems, which you can spend on speeding up all buildings and upgrades or boosters, that let you perform more activities at once. There’s a limit on the number of upgrades you can be working on at all times, you see.

Ultimately, Just Like the Rest, There’s No Real Game Here

Take a glance at the in-game store, and you’ll see an enormous range of gem purchases on offer. Quite quickly, you’ll realise that this game can be a total money sink if you allow it to be. While you can progress through sheer patience and time, there’s simply no way you’re going to be competing at the top of the leaderboards unless you have an absolute ton of money to spend on it.

That’s our primary issue with Warhammer: Chaos & Conquest and games like it. They don’t require a high level of strategic knowledge, skill, or game mastery – just a credit card. The player who wins the most is the one that spends the most, so there’s nothing on offer here for someone who wants to play an actual game.

If you enjoy these sorts of experiences and aren’t put off by all of the pay to win, then Warhammer Chaos & Conquest does offer a level of polish you don’t often see in the genre, along with the Warhammer licence. It’s also pretty straight forward to pick up and play, and features a relatively clean interface.

But if you’re looking for something that you genuinely need to play and master to beat your opponents, just skip this one. It’s an exercise in spending money – not strategic prowess. We can’t really recommend it to anyone but the rich, who’ve got the cash to fork out on being the best.