Warhammer 40,000: Storm of Vengeance is something called a “lane strategy game,” and yes, that’s “lane,” not “lame,” although truth be told… well, never mind. I don’t want to spoil any surprises, and it’s not an awful game by any stretch. It’s just not very good, as either a strategy game or a Warhammer title.

“Lane strategy games,” as far as I can tell, are those in which enemy forces approach one another on a battlefield composed of – you guessed it – lanes, meeting and clashing in a kind of a “Showdown at the O.K. Bowling Alley.” Plants vs. Zombies is probably the best-known (and quite possibly the only known) example of the genre, and it’s the game that most quickly springs to mind as a comparison. Sadly, that’s not because Storm of Vengeance shares that game’s wit, artistry or excitement – it doesn’t. The resemblance is purely mechanical and, as I soon discovered, somewhat superficial.

Rather than an attack-and-defend scenario, in this game the player and the AI-controlled enemy send forces against each other, one side representing the Dark Angel Space Marines and the other the Ork Waaagh!, each occupying opposite ends of a battlefield composed of five lanes. Units are created by collecting and spending resources – Redemption for the Space Marines, Teef for the Orks – and can be immediately sent on their way or stored, in very limited numbers, for later use.

Units that meet in the same lane will battle to the death, and some of them can fire into adjacent lanes as well. They won’t stop to engage incoming enemies outside their own lanes, however, but will instead just intermittently pop off shots at each other as they go by. You can’t even order them to stop and hold a position; if there isn’t an enemy directly in front of them, they’ll continue marching on until they walk off the end of the board. In fact, it’s quite possible to effectively throw away your forces by sending them down lanes you already control: Units can be sent down any lane at any time, regardless of where they were generated or who controls it. Thus, if you place them on a lane you already own – and once placed, they can’t be switched – they will stroll down to the end and then off into the sunset, never to be seen again. 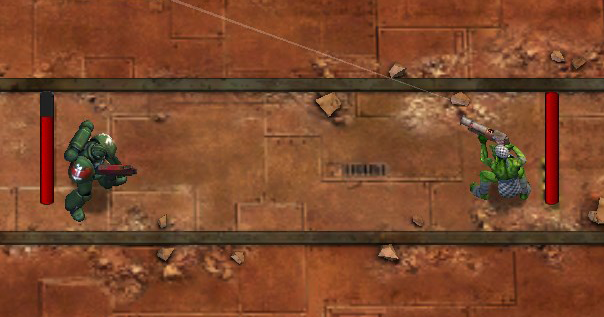 It’s a bit strange, but not a big deal in and of itself. Unfortunately, Storm of Vengeance suffers from a number of other, more pronounced shortcomings. For one, there are only three unit types for each side, plus a fourth special unit that can be called in by collecting and spending a secondary resource. The tiny arsenal really limits the strategy angle because there’s just not all that terribly much that can be done with it, and while units can be upgraded with special abilities acquired through collected experience, doing so lengthens their construction time, which becomes a real problem when the enemy forces are swarming all over you. (And once things get rolling, they will be.) Other, more powerful units are available as paid DLC, at $2.99 each for Ork Stormboyz and Space Marine Terminators and Dreadnoughts, on top of the $4.99 purchase price for the base game.

The fixed lanes and inability to effectively control your forces makes meaningful maneuvering a non-option, and “strategy” eventually breaks down into a game of numbers, as the computer begins to enjoy a serious advantage in resources as the action wears on. It eventually becomes apparent that you’re not fighting an enemy, but are instead just trying to figure out the “trick” to each particular level, and maybe catch a few lucky dice rolls as you go. You can’t even enjoy the spectacle of Orks and Space Marines tearing into one another; the graphics are sharp but everything is so tiny that it’s impossible to make out any real detail, and the zoom cannot be adjusted.

All of this might be forgivable – maybe – if the game was an engaging descent into the epic Warhammer 40,000 universe, but in that regard it doesn’t even come close. A paper-thin story sets up the confrontation between the Space Marines and the Orks, and absolutely no narrative background or supporting history is provided. That may not be a big hang-up if you’re familiar with the setting but if you’re not, be prepared to ask questions like, “Who is this Ghazghkull guy?” and “Why do the Space Marines sound like a religious order?” and then have them not be answered. No unit information is available on the battlefield, and even in the unit descriptions, details are woefully lacking: Tactical marines are the fastest and cheapest Space Marine to deploy while Devastator Marines are the slowest and most expensive, but what’s the actual difference? No idea.

The strategic map, too, is almost devoid of worthwhile information. On day 13, for instance, “East of Kadillus City,” you can choose to “Fight the Orks,” “Outwit the Orks,” or “Crush the stragglers,” but the battles are all virtually identical. And although the game promises more than 50 missions per faction, there are only a few battlefield backdrops, reused over and over. Later levels offer optional extra battles as a way to earn more experience, but there’s never any sense of progression or advancement, or even a cohesive story. I felt like I was engaging in the same fight, again and again, with nothing to distinguish them but different starting conditions. 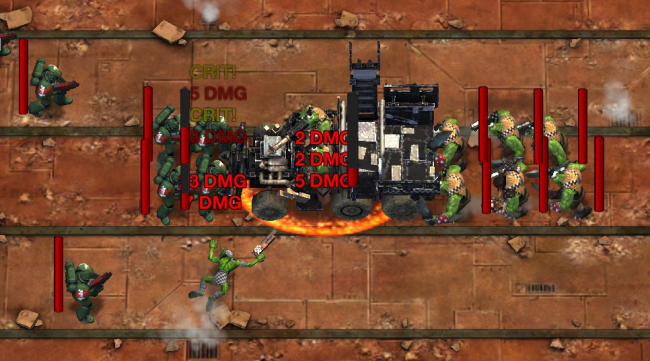 There’s a multiplayer element that serves as a sort of third campaign, but the few times I tried it I wasn’t able to find anyone else to play with, and to be completely frank, I didn’t put a lot of effort into it because by that point I was bored. Really bored.

As a strategy game, Storm of Vengeance is a flop, and as a Warhammer 40,000 title it offers only the thinnest veneer of the famous wargame setting. I honestly don’t know why the developers bothered spending money on the license, because they did virtually nothing with it besides plaster the name on the front of the box. I’m not a 40K fan by any stretch, but even so, I really expected a lot more out of this game than I got.