Warhammer 40,000: Freeblade Review – Not so Free after All 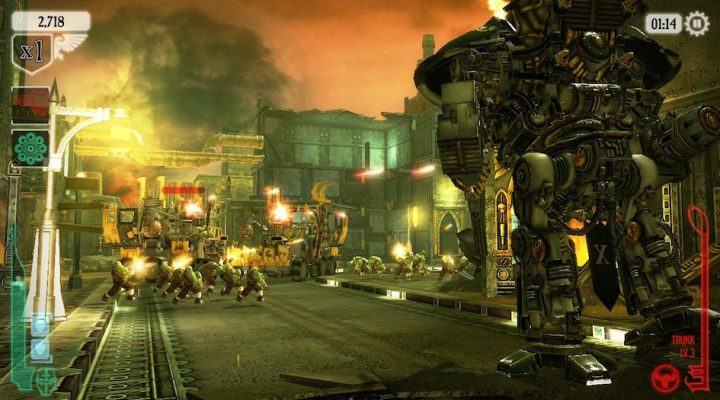 Great use of 3d touch

Also, so much encouragement to purchase things

Warhammer 40,000: Freeblade simultaneously demonstrates just how far mobile gaming has come, and how infuriating some of the genre’s more insidious elements (I’m looking at you, timers) can be. That mostly means you’ll be loving your time with it, before swiftly cursing it all over again. Think of it as like trying to train a small puppy. It’s rewarding but irritating at times too. Except in this case you never actually get to have the loveable, well trained dog you deserve, but you’ll put up with it.

On the surface, an on-rails shooter doesn’t sound too appealing. With limited room for flexibility or even moving off the beaten track, you’d be forgiven for thinking that Warhammer 40,000: Freeblade would turn tedious. It doesn’t because it knows when to stop. Each level is only a few minutes long, giving you just enough time to enjoy what’s here instead of being bored by the repetition.

Those levels are action packed, too. There’s always something to shoot at, whether it’s a horde of enemy troops or a lumbering tank to take down. Shooting is so much more than simply tapping too. You drag a finger around to unleash your machine guns — but it gets so much sweeter on the iPhone 6s. Warhammer 40,000: Freeblade uses 3D touch to great effect. You apply a little pressure while firing to zoom in on a target. Press down even harder and you switch to a heavy weapon. It’s so wonderfully tactile and more satisfying than merely tapping a swap weapon button. There’s melee combat too, with a Quick Time Event forming the difference between a regular hit and a critical strike. It’s typically fast action, but mixes things up suitably well.

As you fire at things, you get to revel in the visual wonder of Warhammer 40,000: Freeblade. It looks impressively eye catching, so it’s no wonder it’s been used as part of an Apple tech demo. This doesn’t feel like ‘yet another mobile shooter’. Except it does when you notice the trappings outside of the gameplay. 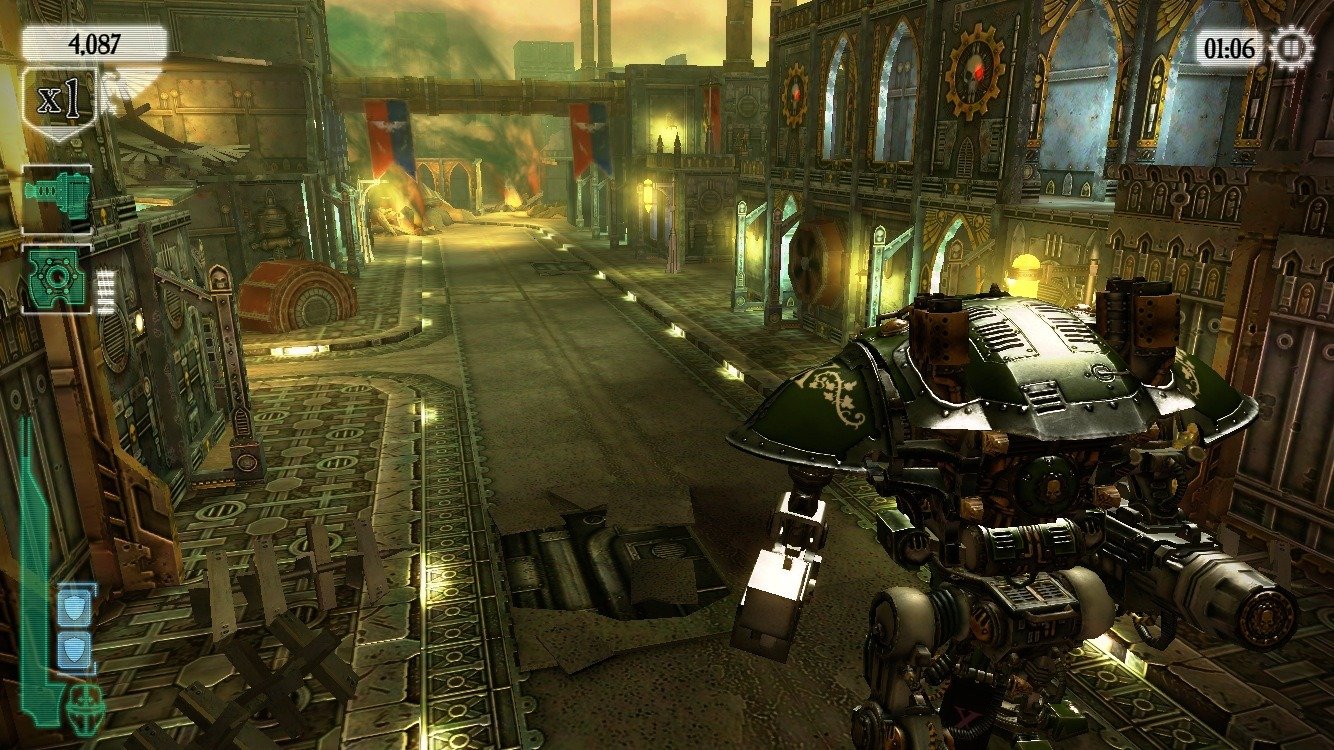 Warhammer 40,000: Freeblade likes to implement timers and to encourage you to buy upgrades with real money, juggling a couple of different currencies along the way. At first, none of this seems so bad. You can forge new equipment through finding items during battle, for instance, although there are short timers to slow down your progress here. You can also seek out potential freebies once a day too, taking out the sting of the game’s premium currency. Soon though, your war machine needs repairing before it goes into battle again.

Yup, it’s a form of timer mechanism to slow you down.

There’s grinding too, with you often having to replay missions to level up in order to stand any chance in later stages — assuming you don’t want to spend money on improvements. 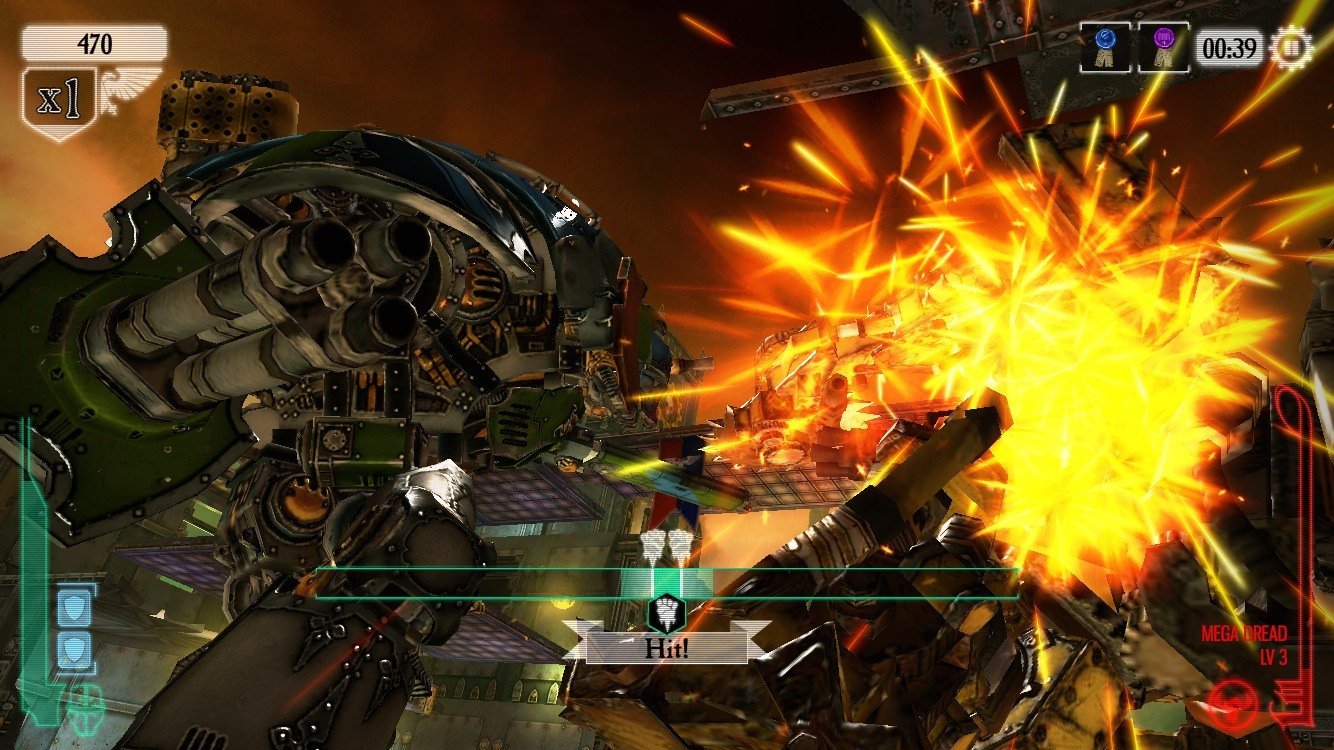 Such elements mean that, all too often, Warhammer 40,000: Freeblade ends up being frustrating. When you’re playing a new stage, it’s great, or when you’re completing daily missions for extra profit. It’s also quite enjoyable to watch as your equipment steadily improves through forging.

When you’re restricted by a game that’s all too keen to make you suffer for not throwing money at it though? That’s when Warhammer 40,000: Freeblade is all looks, lacking in real substance and classiness. It’s frustrating when it’s so close to being a great game.