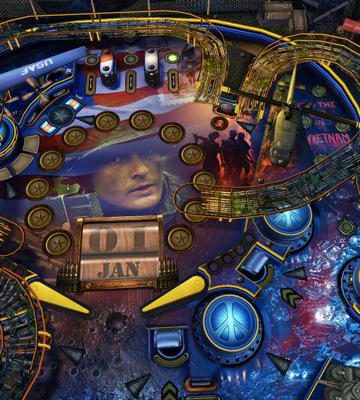 When the iPad first launched back in April 2010, great games for the device were few and far between. In my opinion, the only truly must-own title at the time was Pinball HD. Sure it was just a compilation of previously released iPhone pinball tables from developer OOO Gameprom – but with realistic physics and imaginative designs, it was easily the best pinball simulator available. Now OOO Gameprom has followed up with another pinball release, and this time they’ve gone to war.

Actually, that’s not quite true. They’ve gone to the movies, and the movies have gone to war. Teaming up with MGM, OOO Gameprom’s War Pinball offers up three unique tables based on major motion pictures – all of which depict the horrors of battlefield combat. Platoon, Missing in Action, and Navy Seals have all made the cut, with each table doing its best to recreate the sights, sounds, and feel of the movies.

While the gameplay here is pretty much identical to Pinball HD (the two games share the same engine and overall vibe), the table design here is remarkable, outshining even their own great earlier work. Using elements from the movies, OOO Gameprom have released three tables that remind me a lot of licensed pinball games from the early 90’s. If you’ve never played tables from that era, let me assure you, this is a compliment. The pinball industry’s last great hurrah was defined by brilliantly designed tables that made great use of popular licenses, and that’s exactly what OOO Gameprom has managed to recreate here.

Unlike Pinball HD, I’d have a hard time finding a table I didn’t like in War Pinball. I suppose if I were ranking them I’d probably put Navy Seals at the bottom of the list, but in this case it’s really just a matter of personal preference rather than poor table design.

Like in proper pinball, things in War Pinball are never as simple as “pull the plunger, hit the flippers.” Players are tasked with completing an endless series of tasks, each of which are indicated by flashing lights on the table. If you want to get a good handle on everything that you could be asked to do, each table comes equipped with a guide that explains everything in great detail. The guide may seem a little daunting at first, but if you’re an old school pinball fanatic you’ll be delighted to have these cheat sheets at your fingertips.

While the table layout and gameplay are great, the presentation is where War Pinball really hits a home run. Platoon‘s table feature ramps made of bamboo and moss. Navy Seals has a submarine surfacing on one side of the table. Missing in Action has a giant model of Chuck Norris wielding a machine gun, ready to open fire when activated. From thatched-roof huts to fully-modelled grenades, the look of War Pinball is both imaginative and exquisite. 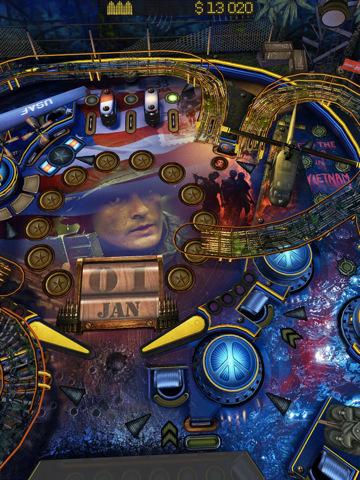 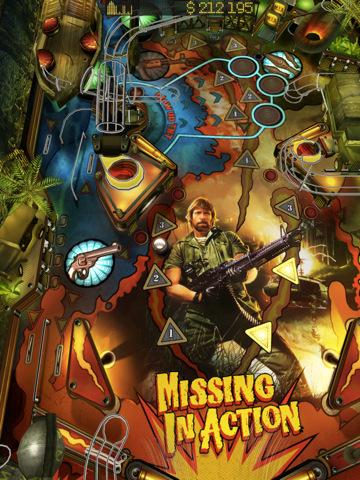 With tight gameplay and great style, you might think there’s nothing to complain about here. Admittedly, the few annoyances we had were minor. For example, while it’s available in Pinball HD, Game Center support is nowhere to be found in War Pinball. And while we loved that there’s a shortcut to buy each movie, it’s downright silly that the link leads to Amazon rather than iTunes.

Still – added options like even being able to purchase the movie at all are a nice little touch. We also really enjoyed the optional stereoscopic 3D setting, which lets you slide on an old school pair of 3D glasses (provided you own some) and check the game out in three dimensions. Luckily I have a pair kicking around for the occasional game where this sort of thing pops up, and I can say that – so long as you pick the right setting – the tables really come alive when this mode is switched on.

All in all, War Pinball is a tremendously satisfying follow-up to OOO Gameprom’s earlier Pinball HD. Everything you loved about their previous effort is back, and the tables are even better than before. If you’re a fan of video game pinball, it’s time to soldier up; looks like you’re going to war.