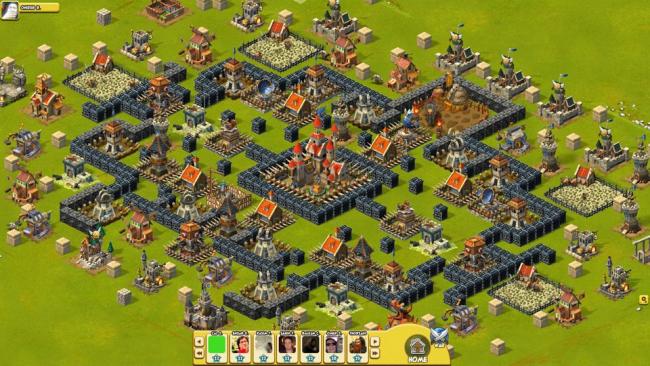 War of Mercenaries may feel like Clash of Clans for Facebook, but this city building strategy game has its own charms.

War of Mercenaries is one of those games that may look a little too familiar when you first boot it up–specifically, it bears more than a passing resemblance to Kixeye’s beloved Backyard Monsters and, more recently, Supercell’s Clash of Clans. To its credit, it handles the popular concept well. Gone are the monsters and their suburban environs; in their place we have the trappings of medieval high fantasy and a host of memorable units. That might be enough to win you over if your preferences lean more toward high fantasy than Monsters, Inc., but be prepared to bring along some friends—the social requirements get demanding fast.

The good news is that it delivers enough depth to somewhat compensate for what it lacks in originality. The premise is remains simple—you build a city with resource generating structures and defend it against other players—but there’s a enough personality in its multicultural cast of mercenaries to at least warrant some attention. First there are the Bedouin Brutes who serve little more purpose than to swarm objectives, and later you unlock more impressive units such as Pharaoh Warriors who lob burning arrows at defensive structures and devastating “Khamikazees” that plow through the most carefully constructed walls.

The joy of a game like this is that you get to see your troops in action after you’ve created (or “hired”) them at the recruiting station and send them to destroy the cities of others players via an intuitive world map. It couldn’t be easier, really; you simply place your units on open ground and let them go to town. It’s a pity, then, that the units initially seem kind of stupid until you’ve unlocked the more specialized classes. In one of my earliest battles against other players, for instance, I placed my units right next to one of his arrow towers in the hopes of eliminating it early on, but the majority of my 20 soldiers proceeded to amble over to the nearby lumbermill first, all the while getting pelted in the back.

The good thing about this arrangement is that it means setting up your cities’ defenses is just as fun as tearing down others’. It’s even more rewarding when you discover the cities of players who haven’t put as much time into it as you have. Many of the player cities I attacked had neglected to put up any kind of wall, leaving me to swarm their cities and loot their resources with relative impunity. I, on the other hand, surrounded my city with a wall that forced enemy units to walk into deadly spike traps and through arrow and cannon towers if they wanted in. As of today, two days after I started playing, my city still stands proudly while I’ve left dozens of others burning in my wake, although I suspect my success partly lies in the tutorial’s silence on genuine strategy. Even so, it’s a good feeling, and one that’ll likely bring me back to War of Mercenaries for several more days to come. 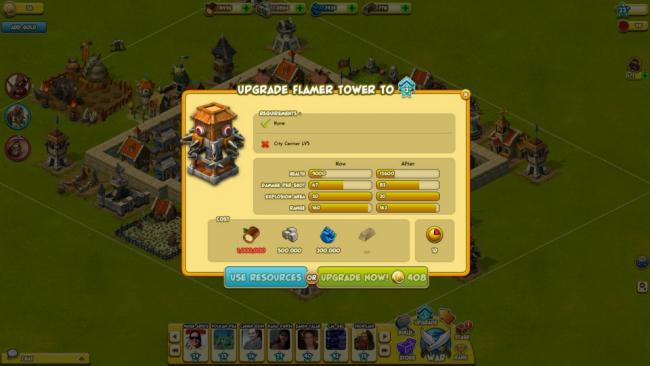 Or not, since none of my Facebook friends want to play it with me. War of Mercenaries may give you a generous helping a premium currency with which to build your city and to skip time consuming quest requirements, but the tokens start going fast once you encounter quests that demand that you assign friends to posts to upgrade a building or which demand social gifts in order to finish a building. It all seems a little heavy handed, especially considering how much fun I was having interacting with other players’ cities on my own.

Such stringent social requirements might make some sense in a genuinely original title (or a more polished clone such as Clash of Clans), but considering War of Mercenaries‘ all too obvious debts to other social games, employing it here seems like a hard sell. Still, it’s worth checking out if only for the active community and the variety of its units and buildings, or for the vibrant if generic aesthetic that at least feels more contemporary than what you find in Backyard Monsters. Most importantly, it’s genuinely fun if you put some planning into it, and certainly worthy of more than one visit. Indeed, if developer Peak Games plays their cards right, War of Mercenaries may end up enjoying some of the same success the similarly fantasy-oriented Clash of Clans enjoys on the Apple App Store.