By Patrick Elliot | 9 years ago 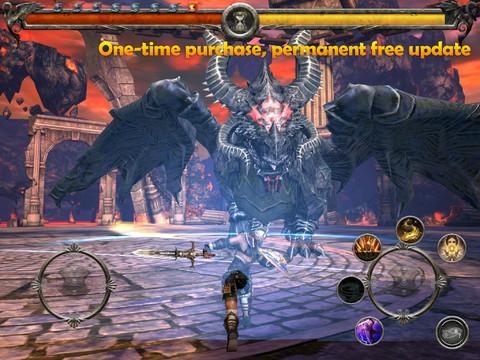 Mixing Infinity Blade with Monster Hunter should taste better than this.

Wanderer: War Song is a take on the basic premise of Infinity Blade, but one which sadly strives to replicate the game’s visual fidelity over what made it truly great — its controls. Set in beautiful 3D worlds, the game has you duke it out with giant mythical creatures in large arenas where you are allowed to move freely and maneuver around foes. Like Infinity Blade, attacks are issued by swiping at the touch screen, with your on-screen character replicating the angle you input. In Infinity Blade, the angling of hits actually offered a strategic advantage, but here, all attacks register damage the same, regardless of their positioning.

The 3D arena fights have a very Monster Hunter type of vibe, as the large foes you fight each have a variety of attacks they’ll issue randomly, and it’s your job to identify them and know the “wind-up” of each offensive move. The damage output enemies wield is vastly larger than your own, so you need to be patient and not rush into attack. More importantly, you need to move and attack swiftly with precision, a tactic made very difficult to pull off thanks entirely to the game’s terribly implemented control scheme.

The game’s controls come together to an unfortunate mix of poor performance and flawed design. You employ two virtual joysticks to control movement and view, with the left stick controlling your character and the right one moving the camera. Camera movement is uber sensitive, making it very hard to slightly adjust the view and bring your opponent into perspective. This results in wild turns that obscure the action and cause you to lose track of your foe quite easily. The left stick controlling your character works well enough — as long as you are not attacking. To attack, you must stop all movement whatsoever, requiring you to move, stop, attack, move away, and repeat. There is no flow to combat, with very little depth to be seen, as your core attacks consist of mindlessly swiping the screen in hopes of landing a couple attacks before it is time to run away and wait to attack again. If you get too close to an opponent, you’ll likely get knocked back, as merely touching a foe — even the back of its heel — will damage you if the attack animation is still finishing up. Requiring players to pause to attack, offering no dodge basic function and punishing players for grazing the skin of an enemy makes moving in close on quick-moving foes a pain. Add in the terrible controls and it gets downright aggravating.

Worst yet, is the game suffers badly from latency issues. You’ll input a command only to see your character stall on-screen, or the camera lag a moment behind, all while your enemy — who suffers no such disadvantage — finishes a killer attack that sends you flying all the way back out to the main menu. The worst control problems of all occur when the game confuses an attack with movement — since you swipe to attack, and use a virtual joystick to directs movement of your character, the game too commonly confuses the two, and when it does, your character will straight up freeze for a solid few seconds before the game figures out what the heck you are trying to do. If you’re lucky, moments later you’ll issue a useless attack into the air. If you’re unlucky, you’ll simply be stand there being pummeled to death by your foe before the game figures out that you were just trying to walk away.

It really is a shame that the game is so utterly, perfectly uncontrollable, because what lies beneath those flawed mechanics is a beautifully rendered game world, as well as some pretty decent boss designs. Facing a boss is a simple affair of selecting their stage from the map. There’s usually a line or two of text describing the monster you’ll face, and upon choosing a stage you are treated to a brief, yet gorgeous in-game cutscene which highlights the big beautiful backdrops of the fight and introduces you to the monster you’re facing off with. And that’s it for exposition. Next you’re dropped right into the action. The beauty of the landscape is pretty much the only interesting aspect of the environment, though, as the flat arena offers little strategic nooks and crannies mid-battle.

As stated before, monsters have a set of pre-rendered attack animations which you’ll need to learn if you hope to be victorious. Interestingly, you can choose to fight bosses on higher difficulties, and doing so doesn’t just up the power of enemy attacks, but actually changes their maneuvers all together. Win on a tougher setting, and the reward changes as well. If the combat was more interesting, or the game actually offered incentive to replay old fights, this would add lots of replay value. But you gain no experience or gold for redoing battles, offering little incentive to revisit felled foes, save for the single-use skills you earn. 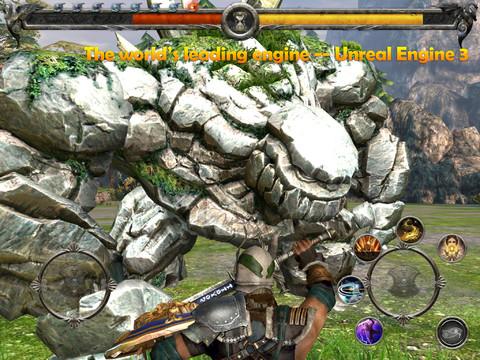 News skills are won depending on the difficulty setting of the battle you finish, but are not permanently added to your roster of attacks. They must be bought or acquired as rewards for use, used in a single fight. That means you don’t get to use them all the time, and if you get stuck on a tough boss, you’ll either have to grind old fights to earn back previously acquired skills, or rely on the base attacks, which we’ve already pointed out, don’t offer very dynamic play.

You’d think the game would let you grind over old fights to up your stats are garner more gold so you could buy some extra goods and improve your power when faced with a difficult fight, but that’s not the case. This, paired with the terrible control make progression a very frustrating endeavor. Sometimes the game crashes, too, which will promptly erase all the skills you saved up and decided to use in that battle, sending you back to square one. You’ll also lose them if you choose to accidentally return to the main menu rather than retry a fight you lost. With such terrible base combat, there is no reason the game should make building a dynamic offense such an obtuse endeavor. 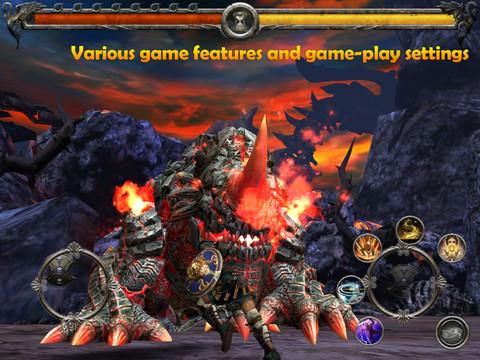 The poor performance of the controls as a whole ties a neat bow around this muddled mess of a game. The game mixes swiped-based combat with virtual dual stick control, which requires you to stop moving to attack, and lends itself very poorly to a game that revolves around fast-paced action, timing and precision. The resulting package is a frustrating mess badly in need of an update, which in its current state has no right demanding five bucks from your wallet. If a fix comes down the road making the game more playable, it may be worth a look for fans of the genre, as it features some interesting boss designs and gorgeously rendered game-world. It’s just a shame that as much time and effort was not put into Wanderer: War Song’s gameplay as was its visual fidelity.