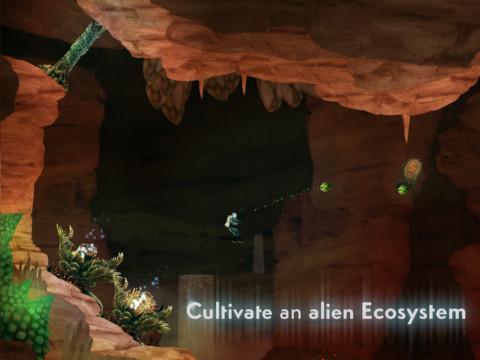 Who would have ever thought gardening could be this interesting?

Up until recently, mobile gaming has always been treated as a bit of a binge activity. Most titles are presented in bite-size chunks, and even though the games can go on forever, they’re designed to be played a couple minutes at a time. Waking Mars is something completely different; a deep, story-driven mobile game that is fully capable of grabbing your attention and not letting go for hours. It’s a unique experience, but it’s also not going to be for everyone.

The plot of Waking Mars revolves around scientist Dr. Liang, his support officer Amani and artificial intelligence ART. The team has been sent to the red planet to have a look at previously undiscovered plant life, as well as to track down Octo, an unmanned drone that has malfunctioned and gone missing. The vast majority of the adventure takes place in a single huge cavern with dozens of linked rooms, and as Dr. Liang dives into the depths of Mars the plot grows more complex and intriguing. I won’t spoil the many well-paced twists and turns here, but it would seem that even though the surface of Mars may be barren, the world beneath is anything but lifeless.

The tale of Waking Mars is deeply rooted in actual science, and the description of the plants and life forms found along the way are so detailed that it’s sometimes hard to remember that this is a game and not a National Geographic documentary. Then again, the team at Tiger Style Games already demonstrated their commitment to storytelling in the excellent Spider: The Secret of Bryce Manor, so it’s no surprise to see them cook up such a great piece of sci-fi.

The title’s gameplay closely mimics exploration-based classics like Metroid and Castlevania (a genre loving referred to as Metroidvania by fans), but with a unique twist. There’s no combat to speak of in Waking Mars, as pretty much the sole measure of progress is made through planting and cultivating Martian flora. Throughout the adventure Dr. Liang finds various seeds which can be planted in fertile soil, each of which instantly produces a specific variety of plant. Players are then tasked with effectively using the various plants to raise the biomass level in each room. Success opens up new pathways of exploration and leads one step closer to unraveling the game’s mysteries.

The premise sounds like it should be boring and not work at all, but in fact the game’s mechanics are quite intriguing. The trick in each room is to carefully balance the distribution of the various plant types, creating a sort of self-sustaining ecosystem that can exist in perfect symbiosis. Waking Mars does a terrific job pacing the introduction of new seeds and plants so that things stay fresh well into the latter half of the game.

Actually, the game’s biggest drawback is its complexity, as it is highly likely that a fair number of players will eventually find themselves overwhelmed by the variety of plants, non-sentient bugs and various hazards that await in the deeper chambers. Things really start to get crazy once you obtain the ability to change the fundamental properties of the fertile patches of ground, which in turn affects which plants will take root and your entire strategy for the room. Suddenly the rules which bound you are thrown out the window and you’re left to figure it out on your own. Some players will likely relish this freedom and take to it easily, but for many others this will be the station where they jump off the ride, anxious to continue further.

Waking Mars is a smart, well-crafted game whose smart complexity means it won’t appeal to everyone. The story takes about 7-8 hours to tell start to finish (longer if you go for the special ending), so it’s also not very conducive to short sessions. In spite of that, this is an absolute must-buy for fans of Metroidvania titles and those looking to use their iPhone for something more in-depth than Peggle. It’s beginning to look like the Tiger Style Games group is a special one in the mobile space.